A shill is the surreptitious partner of a huckster salesman, revving up an audience to believe a sales pitch and buy a product.

Looking back at months of rioting and arson along the Gaza border with Israel, and the distorted rendition of reality by the New York Times of those events it’s undeniable the publication has promoted Hamas propaganda, relaying to its millions of readers what the terrorist group wanted them to believe and omitting what Hamas preferred concealed. The product sold? Israel as aggressor, Palestinians as victims.

As of this writing, there’s been, for instance, no human interest story devoted to what Israelis are suffering as they witness thousands of acres of farms and nature preserves, and extensive wildlife, destroyed in nearly continuous fires set by flaming kites and airborne fire bombs from Gaza.

When Times Bureau Chief David Halbfinger covered the arson story on July 10, he termed the Hamas campaign “ingenious” and the impact for Israel “exasperating.” (In fact, for Israelis the impact of the destruction can be frightening and devastating.) But the focus was overwhelmingly on criticism of Israel’s countermeasures against Gaza.

As throughout the coverage, the tilt was the same; Hamas violence was discounted and Israel’s defensive action to stop the aggression was heavily faulted.

What Hamas wanted from the outset when it launched its Great March of Return campaign was stepped-up world pressure on Israel, fueled by stories and images of its people, especially civilians, “protesting” at the border fence and enduring injury and death at the hands of Israeli soldiers.

What Hamas would not have liked in the news for all to see were the violent methods used by many Gazans and the violent, anti-Semitic railing of its leaders, scholars and imams fanning the riots.

The Times obliged on all counts. There was no mention by its reporters of Hamas’s bigoted exhortations attacking Israel and Jews and minimal attention was paid to the rioters’ violence. Instead, for weeks the Times’ story line showcased strikingly romanticized Palestinian “protesters” slinging rocks at an army massed against them. The Times refused to term those hurling fire bombs and flaming tires as well as tearing down the border fence with hatchets and knives and planting IED’s and firing guns “rioters.”

Times correspondent Declan Walsh, for instance, was on the scene inside Gaza during the height of the riots in May, filing stories almost entirely through Palestinian eyes, seeming emotionally swept up himself in the story. This was conveyed in his print reports and in a May 17 Times podcast interview about the death of Layla al-Ghandour, an eight-month old baby initially reported to have been killed by tear gas inhalation. Multiple stories offered personalized accounts of the child’s death and its impact on the family and the wider world. A dramatic color photo cast the swaddled child and mother as madonna-and-child-like figures, while grim funeral images revealed the tiny, ashen-hued corpse.

The Times wrote: “Her story became a rallying cry for those denouncing Israel’s crackdown on Palestinian protesters.”

Of course, the Times itself helped make it a “rallying cry”! While acting as if it were a bystander in its commentary on the phenomenon of a child’s story sweeping the globe, in reality it was a propellant for that “story.” 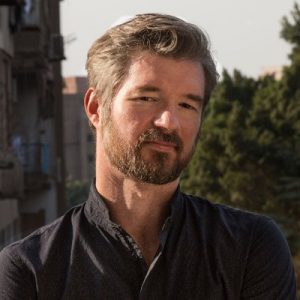 In the Times podcast, Walsh speaks repeatedly and tenderly of “baby Layla” and of his visits with her family, and he traces her movements the day she died. He describes the explosion of social media sympathy and support for her, saying she was seen by Palestinians as a symbol of Israeli “brutality” and even more as a sign of the “desperation” of Palestinians who at “great personal risk” go up to the fence just to make a point.

He terms the “protests” a “cry for attention,” as though the rioters were clamoring children.

When it is subsequently revealed that Layla did not die from Israeli tear gas, Walsh reports that Israelis “seized on” information from a doctor in Gaza who said Layla had a pre-existing condition that took her life.“Seized on” is a notable choice of words, reflecting the caustic treatment of Israel. Seemingly, Walsh found objectionable or opportunistic Israel’s moving quickly to refute a blood libel against the Jewish state.

Walsh claims that both sides used the story “for their own purposes.” This casting of news coverage as competing narratives – not actual events and facts to be relayed as such – dominates much of the Times coverage of Israel. It’s a journalistic dodge, a pusillanimous refusal to state the facts, many of which reflect badly on the Palestinian side.

It’s a fact that Hamas concocted the baby story, a gruesome falsehood, to whip up hatred and violence against Israelis, and Israel sought to neutralize it with the truth. That is, the aim of one party was to incite hatred by whatever means and the other to fend off the virulent propaganda. Walsh’s false equation seeks to gloss over the full, unpleasant facts about Hamas’s unique responsibility and callous exploitation of a baby.

disclosure of Hamas’s fraudulent propaganda gambit did not prompt the Times to do a story on the difficult challenge of covering events when one side is a terrorist group willing to take advantage of its own vulnerable and innocent children.

Indeed, disclosure of Hamas’s fraudulent propaganda gambit did not prompt the Times to do a story on the difficult challenge of covering events when one side is a terrorist group willing to take advantage of its own vulnerable and innocent children.

At the same time, Walsh wrote in a May 16 story: “The controversy underscored the power of images of children in the most wrenching conflicts of the Middle East. Photographs of Layla’s mother, Mariam, clutching her daughter’s limp body in a Gaza hospital ward have become a potent political symbol…”

Again, the newspaper that itself fed global misunderstanding about what happened to an eight-month old baby with its own melodramatic imagery, false information and hyper-focus on the story notes “the power of images of children.”

A further, major development in the story of the baby went entirely unmentioned by the Times. It was reported in other media that an uncle of the child claimed Hamas paid the family thousands of dollars to invent the story about Layla dying of tear gas inhalation at the hands of the Israelis. Covering this twist in the saga would have, of course, substantially added to public understanding of Israel’s conduct and that of its adversary.

During these weeks, hundreds of Israelis living with their families in communities close to the border knew that many rioters had maps intended to guide potential terrorists who breached the fence directly to Jewish homes and kindergartens. They could hear and see the daily rioting of those seeking to invade their neighborhoods, they could smell the smoke of burning tires and they watched thousands of acres of their farmland and nature preserves destroyed by arsonist kites and exploding balloons from Gaza. Their personal stories were invisible to readers.

The role of a shill is also to conceal any nefarious intent by the huckster, to protect the sheen of the product. Consistent with this, the Times’ highly selective attention to the facts of the Gaza story served to conceal Hamas’s own double message. While the terror group sought to gain advantage in the global court of public opinion on the one hand, it also sought to assure its own domestic audience that its warriors were continuing the long fight to annihilate Israel. Thus Hamas leader Salah al-Bardawil went on camera on May 16, 2018 to counter potentially damaging claims that Hamas was exploiting women and children and to note that 80% of those killed were affiliated with Hamas or other fighting groups. The Times never reported this key information that those killed were, despite the paper’s own dramatic focus on two young females and constant reference to “protesters,” overwhelmingly male combatants.

Hamas leader in Gaza, Yahya Sinwar, was open about the results of media coverage, saying: “Our people have imposed their agenda upon the whole world. There was supposed to be a romantic picture of the opening of the U.S.embassy in Jerusalem on the world’s television screens, but our people, in their collective consciousness, forced the whole world to split the television screens between the footage of fraud, deception, falsehood and oppression manifest in the attempt to impose Jerusalem as the capital of the occupation state, and between the image of injustice, oppression, heroism, and determination painted by our own people in their sacrifices – the sacrifice of their children as an offering for Jerusalem and the Right of Return.” (MEMRI, May 18, 2018)

Sinwar also declared in April: “We will take down the border and we will tear out their hearts from their bodies.” But the Times took a pass on reporting both of these Sinwar statements. Halbfinger did report on the Hamas leader’s statements at a press conference, including his statement that: “We want to invest in peace and love.” (“In Gaza, A Hamas Leader talks of ‘Peace and Love,’” May 11, 2018)

Hamas incited its people in anti-Semitic mass rallies to storm the borders, threatening Jews with the return of Muhammad’s armies and calling for “death to Israel” and the supplanting of Israel “from the river to the sea” (MEMRI May 15), but Times reporters ignored it all. And Hamas leaders understood they could broadcast their message to large audiences in full view of the media with little if any risk it would reach Times readers.

Indeed, for instance, correspondent Declan Walsh reported in the May 17 Times podcast, referencing an appearance by Hamas leader Ismail Haniyeh near the border fence, that crowds were chanting: “No more peaceful protests. We want rocket firing.” In fact, the language of the screaming crowd heard in the background was a lot more violent and included the familiar threat that Mohammad’s armies are coming and “Death to Israel.”

Walsh observed that, “We’ve had these protests that have been largely peaceful along the border fence that have brought an immense amount of sympathy to the people of Gaza and I suppose have been a sort of public relations boon for Hamas.”

Indeed, those “protests” surely have been a PR boon for the Palestinians. And the Times has been the abettor, denying readers the full reality and encouraging more exploitation and deception from Hamas in the next round.