Did fighting lead to Israel’s creation? And do Palestinians who fled Israel in 1948, and their descendants, have a legal or moral right to return to former homes in Israel? One might think so from the New York Times’ March 26th article on the subject, “For Many Palestinians, ‘Return’ Is Not a Goal,” by reporter Hassan Fattah.

Fattah, for example, in relating the views of Nimr Abu Ghneim, a Palestinian in Jordan, writes:

… there can be no peace with Israel until he and 700,000 other Palestinians are permitted back to the homes they left in the 1948 fighting that led to Israel’s creation. 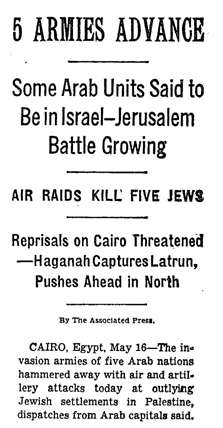 The “1948 fighting that led to Israel’s creation”? Perhaps Times reporters and editors have forgotten that Israel was created by United Nations General Assembly Resolution 181, which also called for the creation of a Palestinian state. When, at the end of the Palestine Mandate, Israel declared its independence, five Arab armies along with Palestinian militias went to war against the new state. It might be a good idea for Times editors to review articles in their own paper from those days, for example the one at left about the day the Arabs started the war.

The overriding aim of the Arabs was to destroy the Jewish state, not to create a Palestinian state. They failed, but in the course of their bitter and costly war they managed to kill 6000 Israelis, fully one percent of the country’s population. To put this in perspective, for the United States today that would be around 3 million people killed. In addition, hundreds of thousands of Palestinians fled the war that they and the Arabs had started, with some of the refugees leaving at the command of Arab leaders who ordered them to get out of the way so the Jews could be killed. (It is fashionable these days to claim this is a myth, but as admitted even by revisionist historian Benny Morris, it is no myth.)

But in recounting the Arab view the Times ignores all this, and repeats with a straight face demands Israel accept that its creation caused the refugee problem:

Now the discussion is centering on how to define the right of return in a new way. Some have come to see the issue as two separate demands: the acceptance, by Israel, that its creation caused the displacement and plight of the Palestinians; and the ability to move back to the lands they or their families left.

Nothing could be further from the truth. The displacement of the Palestinians, and the killing of 6000 Israelis, were both the result of an Arab war of aggression.

And what of the “right of return” and U.N. General Assembly Resolution 194, which the Times characterizes in the following words:

Resolution 194 says, “Refugees wishing to return to their homes and live at peace with their neighbors should be permitted to do so at the earliest practicable date,” and calls for them to be compensated if they choose not to return.

Is this an accurate description of Resolution 194? Hardly. The central provision of the resolution called for the creation of a Conciliation Commission and:

… establishment of contact between the parties themselves and the Commission at the earliest possible date … to seek agreement by negotiations [and thereby reach] a final settlement of all questions between them. (paragraphs 4 and 5)

That commission was duly formed and met in Lausanne, Switzerland, where the Arabs refused even to meet with the Israelis, much less to negotiate peace, a stance that was maintained through many years and multiple costly wars. The only clause of Resolution 194 the Arab side ever acknowledged was paragraph 11, which suggested (it could not “require,” since it was a General Assembly rather than a Security Council resolution) that:

refugees wishing to return to their homes and live at peace with their neighbors should be permitted to do so at the earliest practicable date … [R]epatriation, resettlement and economic and social rehabilitation of refugees and payment of compensation [should be facilitated]. (emphasis added)

Even if this were a Security Council resolution, because it only recommends that refugees be permitted to return, it can hardly be characterized as creating a “right.” Moreover, the requirement that returnees first accept living “at peace with their neighbors” meant that Palestinian returnees would have to accept Israel’s right to exist, something that very few of them, even today, seem truly willing to do. Further, it did not even hint at any return rights for descendants of refugees.

Additionally, even if Resolution 194 had been legally binding in 1948, it would have lost any such weight under the fundamental legal principle of estoppel. Under this quite reasonable precept, a party who materially violates a contract or agreement is barred from asking other parties to live up to their obligations under the same contract. The Arab side, having rejected and violated Resolution 194 from the day of its inception, cannot now come to Israel and say “Implement Paragraph 11.”

These facts, which the Times ignored in its article and which it and other media generally ignore, are not just of historical interest – they are absolutely crucial to peace. Because if the Arabs continue to convince themselves, and teach their children, that Israel caused the refugee problem, that the Palestinians and the Arabs are blameless victims, and that UN Resolutions establish a “right of return” which Israel has somehow been allowed to flout, their sense of injustice and righteous anger will never allow them to make the difficult concessions that are crucial for a real, lasting peace.

Only when the Palestinians and the Arab world realize and accept their own culpability, their own substan tial share of the blame for what has happened, will peace be possible. Those, like the Times, who assist the Palestinians to avoid that day of reckoning succeed only in nurturing grievance and conflict.