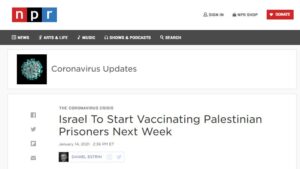 Overriding objections from the minister in charge of prisons, Health Minister Yuli Edelstein said Thursday that Israel will start vaccinating all prisoners next week, including Palestinian security prisoners being held in Israeli correctional facilities.

“We adhere to all of the priority committee’s guidelines,” Edelstein said while visiting a vaccination center in the central city of Ramle, referring to the Health Ministry panel tasked with setting national policy vaccination priorities. . . .

Public Security Minister Amir Ohana, however, has thus far instructed prison officials to refrain from vaccinating inmates against COVID-19 until further notice, after a Palestinian official said that security prisoners were expected to soon begin getting shots. Ohana’s ban included not only security prisoners, but all inmates.

Ohana has called for vaccinations to be given only to prison guards, not inmates, until a larger number of non-incarcerated Israelis are inoculated.

Indeed, buried in the eighth paragraph of Estrin’s article is the fact that Ohana called for a ban on vaccines for all prisoners:

He instructed only prison staff to be vaccinated for the time being, excluding all Israeli and Palestinian prisoners, Herbst [a spokesperson for the Israel Prison Services] says.

The Minister of Public Security Amir Ohana directed the Israel Prison Services on Dec. 24, 2020 that only staff will receive the coronavirus vaccine; vaccination of prisoners will not take place without permission and only in accordance with guidelines for advancing vaccination which apply to the general population.

Why then does NPR falsely frame the story as one that applies singularly to Palestinian prisoners, as if they have been denied the vaccine which others have received?
In a separate report, on “Consider This” Jan. 14, Audie Cornish asked about vaccine accessibility for Palestinians in the West Bank and Gaza Strip:

So why is it not the case for Palestinians – right? – in areas under Israeli control? What’s going on there?

The vast majority of Palestinians living in the West Bank live in Area A, that is under the total (civil and security) control of the Palestinian Authority. They do not live “under Israeli control.” Likewise, Gaza Strip Palestinians do not live “under Israeli control.” They live under the control of Hamas.
In his online report, Estrin more accurately referred to the “Israeli-occupied West Bank and the Hamas-ruled Gaza Strip, which is blockaded by Israel and Egypt.”
This distinction matters because, under the Oslo Accords, it is the Palestinian government which is responsible for vaccinating its population (including those in Area C, which is under Israeli civilian control). Article 17 of Annex III of the 1995 Interim Accords state:

Unfortunately, however, “Consider This” ignored the Palestinian obligation under the bilateral Oslo Accords to vaccinate their population, with Estrin stating only:

Well, there’s a dispute about that. U.N. experts, international rights groups, Palestinian officials – they all say Israel has an obligation as the occupying power in the West Bank to ensure that Palestinians get access to vaccines.

It is the Oslo Accords which govern Palestinian-Israeli relations and spells out responsibility for the vaccines. Nevertheless, Estrin treats the issue as a he said/she said in which he has clearly chosen sides, ignoring the actual contractual document which definitively puts the issue to rest.
Donate Now