If a newspaper fails when it comes to journalism’s most obviously ethical tenet — accuracy — it’s not surprising that it would also stumble on more subtle ones. The New York Times does both in its March 20 story about the voting intentions of Israel’s Arab citizens.

The piece’s author, Jerusalem bureau chief David Halbfinger, finds his way to one of the newspaper’s favorite topics — bad Israelis — when he claims, “Polls have shown that nearly half of Israeli Jews would favor expelling all Palestinians.”

Which polls? Although the text of Halbfinger’s article doesn’t name them explicitly, the passage clearly refers to a 2016 survey by the Pew Research Center, which the Times links to from the words “polls have shown.”

But the Pew poll does not find that nearly half of Israel’s Jews favor expelling all Palestinians.

The poll asked respondents whether they agree or disagree with the following statement: “Arabs should be expelled or transferred from Israel.” In other words, Pew said nothing about “all” Arabs. That word was shoehorned in by the New York Times. In addition, although the Times only refers to “expelling,” Pew’s prompt references expulsion or transfer. The latter word encompasses to Israelis a range of meanings that don’t necessarily correspond with what “expel” means to Americans.

Indeed, the question’s vague reference to “Arabs” rather than “all Arabs,” and its use of two different words with different possible meanings, were the focus of widespread and pointed criticism by experts at the time.

In the Jewish Journal, Shmuel Rosner, who is also a contributing opinion writer for the New York Times, expressed concern about what he called the “disturbing” response to the survey question, but also made clear that he wouldn’t have responded to a question worded so vaguely. Pew’s question “did not elaborate on specifics,” Rosner said. “Does [it] mean all Arabs? Some Arabs? Those who make trouble?”

In the Jewish Chronicle, Nathan Jeffay likewise faulted the question as having “left a lot for the respondents to define for themselves”:

Did they respond in relation to all Arabs, as one would gather from the way results have been presented? Or were they thinking about specific cases, such as Arabs who sympathize with terror or — as-per the policy that Prime Minister Benjamin Netanyahu is currently having checked by state lawyers — to move the families of terrorists who carry out attacks out of Israel?

Every respondent will have interpreted the question in their own way, which is bad planning by Pew because it needed just one more letter to make this aspect of the question clearer. The definite article is extremely important in Hebrew, and if Pew was interested in what Israeli Jews think about the presence of Arabs, it should have asked about “the Arabs” not “Arabs” — which would have required one extra [Hebrew] letter, a hey.

Sammy Smooha, a leading pollster and professor of sociology, agreed. “Although it’s clear that support for expulsion and transfer should be condemned,” he said, “the wording of the question is vague.”

Smooha explained that the question as phrased did not specify the identity of candidates for expulsion, so that it’s possible that respondents thought it referred to the transfer of West Bank residents who reside in Israel proper but are not Israeli citizens per se. Moreover, the sociologist said it does not state whether the expulsion would affect all Arab citizens in Israel, or only those who support the country’s enemies or are deemed to be subversive. “In other words, this question can be understood in various ways,” he said. 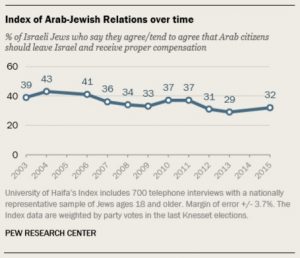 An image from the Pew report makes clear that other polling yielded substantively different findings.

Pew itself notes in a full-page sidebar to its report the importance of the question’s wording, and pointed to a University of Haifa poll conducted that same year, and 10 prior surveys, that found significantly less support for transfer. In the university’s 2015 poll, Pew acknowledged, 64 percent of Israelis disagreed that Arab citizens should “leave” the country and receive proper compensation, and less than a third agreed.

Subsequent polling, including a 2018 poll by the Palestinian Center for Policy and Survey Research that concluded only 8 percent of Israeli Jews support expulsion (along with 17 percent of Palestinians who support the expulsion of Jews), likewise found significantly fewer Israelis backing transfer than in the poll the Times links to and misrepresents.  And yet, David Halbfinger, the Times bureau chief, ignored Pew’s admission and other countervailing evidence even while claiming that “polls,” plural, show half of Israelis supporting the expulsion of all Arabs.

It would be inexcusable for New York Times to take liberties with the Pew poll’s wording even in a vacuum. To introduce the inaccurate word “all” despite so much conversation about, and criticism of, the poll question’s wording is simply stunning.

CAMERA yesterday brought the error to the attention of the article’s author and editors. As of 24 hours later, there has been no correction.

The meaning of “expulsion” was clear, but what was meant by “transfer”? The leading Israeli pollster Camil Fuchs, who was not involved in the Pew research, said he understood the word haavara — transfer — to refer to a process by which nobody leaves their homes.

He said that while it would be subject to respondents’ own interpretation, it mostly signals the proposal to redraw borders in order to place some Israeli Arabs under Palestinian jurisdiction. Also known as “land swaps”, this is a mainstream Israeli doctrine, based on the premise that if a peace deal ever happens, Israel will give up parts of Israel to the Palestinians in return for holding on to some settlements. US President Barack Obama has advocated land swaps as a way to make a peace deal realistic.

And so, a question that will have been for some — and we cannot ignore this — expelling all Arabs, for others will have been about expelling or physically transferring some individuals. Meanwhile, there will have been respondents who were just embracing land swaps. Dr Fuchs says that Pew’s sky-high figure resulted from that no-no of polling known as “double barrelling.”

This is where a question touches on two issues but allows just one answer — and often creates a single impression about people who respond positively. “You don’t ask a question about two things together,” said Dr Fuchs, suggesting that “expelled” and “transferred” are politically-speaking the “opposites” of each other but were squeezed together by “double barrelling”.

Dr Fuchs, a frequent pollster for Ha’aretz whose polls often tell hard truths about Israeli society, said: “I don’t presume that all or a great many of the people who answered ‘yes’ want to move all the Arabs.”

And yet, while inserting the word “all,” the New York Times also avoided noting the word “transfer” and its different possible meanings. Both the addition and the subtraction seem meant to cast Israelis in a more negative light.

Along with its straightforward distortions of fact, the Times article also tilts the scales in more subtle ways, by editorializing about alleged Israeli racism.

For example, the reporter’s claim that Israel’s nation state law “dealt a blow to ideals of equality” is not a fact, but rather an opinion — one that is held by some and opposed by others. If Halbfinger holds that opinion, he’s free to express it in an opinion piece. But he should strive to remain impartial in his news reporting.

Halbfinger also makes clear that he agrees with one of his interviewees who insists that Benjamin Netanyahu was depicting Arab Israelis “as traitors, as a fifth column, as illegitimate” when he announced that “Israel is the nation-state of the Jewish people — and not anyone else.”

But there is a clear difference between, on the one hand, supporting Israel’s role as the Jewish nation-state, and on the other, believing negative things about the country’s Arab citizens. Again, those interviewed in the story are certainly entitled to opine that Netanyahu holds both views. But that opinion shouldn’t be endorsed in print — Halbfinger insisted that Netanyahu’s “implication was clear” — by an ostensibly objective news reporter.

The New York Times misreported Pew’s polling earlier this year, too. In January, it inaccurately claimed that a minority of Israelis held a positive view of the United States in 2015. In fact, 81 percent viewed the US positively that year. The newspaper initially refused to correct the straightforward error, but eventually published a correction. See more here.