A story in the New York Times this week focused on two charged issues related to fighting between Hamas and Israel: War crimes and casualty counts. Unfortunately, the paper got the story wrong. On the plus side, the very same article that eventually rebutted its own misinformation.

The piece, written by reporter Declan Walsh and titled “When Fighting Erupts Between Israel and Hamas, the Question of War Crimes Follows,” opens with rather emphatic statements about the topics dealt with in the article. “Both sides appear to be violating” the laws of war, the reporter states, citing “experts.” Three subsequent statements elaborate on this allegation:

But later in the piece, thanks to some factual reporting, it becomes apparent that the reality is much less straightforward than the reporter initially suggested.

The New York Times‘ Declan Walsh describes Hamas casualty claims as “facts,” before eventually noting that they might not be so reliable.

One thing is indeed clear, and Walsh is right to say so with unequivocal language. Hamas’s indiscriminate rockets targeting Israel’s civilian population are war crimes. No serious arbiter of international law disputes that assessment, and even non-governmental organizations that are ideologically hostile to Israel acknowledge it.

But what of the Walsh’s reference to the “likelihood” that Israel used disproportionate force?

Proportionality, as a concept in the laws of war, isn’t an assessment of the relative “intensity” of the clashing sides’ bombardments, nor is it an assessment of whether civilians were killed or buildings destroyed.

Walsh eventually informs readers of this reality. “The killing of civilians is not, of itself, illegal,” he writes, citing a professor of international law. Readers are also informed that armies “must discriminate between civilian and military targets”; “must weigh the military advantage gained from any potential strike against the damage to civilians that it will cause”; and “must take all reasonable precautions to limit any civilian damage.”

Did Israel do all of this? “No legal adjudication is possible in the heat of battle,” Walsh explains elsewhere, which is certainly true when assessing strikes by armies that make an effort, amid the fog of war, to determine the location of the enemy’s military assets, the value of those assets, the location of civilians, the likelihood of those civilians being affected, and the advantage gained by striking those assets.

And yet, the reporter does adjudicate, stating—without any specific knowledge of Israel’s targets, its assumptions, or its assessments—that the country is “likely” guilty of a disproportionate response.

As noted above, Walsh also charges Hamas with war crimes. In that case, though, the indictment isn’t based on the principle of proportionality, but rather on discrimination. Hamas’s indiscriminate rockets are by definition unable to differentiate between civilian and military targets, and so when launched toward civilian population centers are by definition war crimes. Lest anyone think the terror group would spare civilians if its technology allowed, recall that Hamas is also known using a weapon that can target with great precision: suicide bombers, who have been dispatched to civilian buses, bus stations, cafes, restaurants, shopping malls, dance clubs, pizzerias, and crowded hotel dining rooms.)

Finally, regarding the last of the three points above, is it indeed a “fact,” as Walsh claims, that Israeli strikes had killed “197 Palestinians, including 92 women and children”?

Again, an eventual elaboration by the reporter suggests otherwise:

Although the casualty list provided by the local Ministry of Health — the source for the figure of 197 deaths over the past six days — is generally accurate, they say, Hamas will not say how many of the dead are militants, or were killed by Hamas missiles that fell short and exploded inside Gaza.

Which is to say, the numbers provided by the Hamas’s health ministry are far from “facts,” and we don’t actually know how many civilians were inadvertently killed in Israeli airstrikes. The group, moreover, has made clear its intent to deceive. During a round of fighting in 2014, Hamas issued guidelines to Palestinians in Gaza to call anyone killed a “civilian,” regardless of whether they were actually a fighter.

Walsh takes a half-step toward elaborating on those Hamas missiles that fell short, pointing to a 2019 report that acknowledged one Gazan civilian was killed by a misfired Palestinian rocket. But he didn’t have to look that far back to convey the toll of such misfires. Much more relevant to his story is what has happened during this round of fighting, when far more than a single Gaza resident was killed by Palestinian rockets.

Even Defense for Children International-Palestine, whose benevolent name belies extremist affiliations, has acknowledged that on May 10 a misfired Palestinian rocket killed eight Palestinians, and suggested that within minutes of that incident a second Palestinian rocket may have killed another eight, including six children. Why, then, did Walsh seek out a less considerable example from years past?

Israel has counted hundreds of additional rockets fired from Gaza have landed in Gaza since the fighting began. How much these misfires contributed to Hamas’s casualty figures is unknown.

The New York Times article is marred by other glaring problems. Declan Walsh turns for comment to Nathan Thrall, whom the paper knows to turn to when it seeks a reliably anti-Israel voice—and the commentator delivers:

Others push back on Israel’s insistence that Hamas is to blame for the civilian casualties because it operates from residential areas. In a densely populated place like Gaza, “there is almost no way to fight from it without exposing civilians to danger,” said Nathan Thrall, author of a book on Israel and the Palestinians.

Thrall doesn’t deny that Hamas exposes Gaza civilians to danger. And he doesn’t address the fact that using the presence of civilians as human shields is a war crime. Rather, he claims that Hamas has no other choice but to fire rockets at Israel from crowded civilian neighborhoods because, he wants readers to believe, those are all that exist in the Gaza Strip. It is a flagrant falsehood.

Yes, the Gaza Strip’s big cities are densely populated. But outside of those cities, there is plenty of sparsely populated land. Hamas certainly could fire at Israel from the Strip’s vast open spaces. But it chooses not to, likely because its fighters are more exposed when they aren’t embedded among civilians. In other words, Hamas isn’t forced to put its population in danger; it decides to do so to minimize the danger to its fighters, in violation of the laws of war.

A New York Times reporter covering the region should know that Thrall’s assertion isn’t true. Why, then, did Walsh pass along the false charge without pushback? 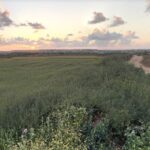 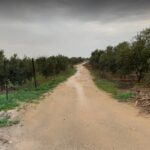 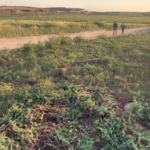 The reporter and his interviewee didn’t stop there. In the paragraph that follows, Thrall insinuates that Israel behaves no differently than Hamas does:

Mr. Thrall noted that the headquarters of the Israel Defense Forces was in a residential part of Tel Aviv, beside a hospital and an art museum.

So Thrall’s response to Hamas attacking Israeli civilians from among Palestinian civilians, both of which are violations of the laws of war, is to wrongly claim that they have no choice, and then to change the topic to the location of Israel’s defense ministry and army headquarters, as if that’s relevant.

It’s not relevant. In contrast with Hamas’s well-documented habit of firing rockets from school yards, near hotels, alongside UN buildings, and other civilian areas, it is not considered a violation of the laws of war for Canada’s Department of National Defence and Army Headquarters to be across the street from the University of Ottawa; nor for the Netherlands’ Kromhout Barracks to be between Utrecht University and a school for children with disabilities; nor for Sweden’s army high command to be across from a preschool or for its ministry of defense to be between an opera house and a karaoke bar; nor for the Japan Ground Self-Defense Force headquarters to be surrounded by schools and a nursing home.

Thrall was simply flailing. And he was doing so to defend Hamas.