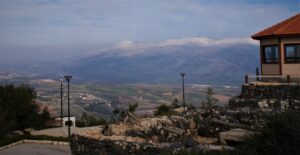 The view from Misgav Am (Photo by Hadar Sela)

CAMERA Arabic yesterday prompted correction of a Reuters Arabic report which erroneously referred to Kibbutz Misgav Am, a small Jewish community in northern Israel, as a “settlement.” The May 17 article about rockets fired from Lebanon into Israel, and the Israeli military’s return fire, had stated (all translations by CAMERA Arabic):

The Lebanese shelling caused Israeli air raid sirens to blare near the settlement of Misgav Am, along Israel’s northern border with Lebanon. (Emphasis added.)

Established 1945 and continuously inhabited ever since, Misgav Am is not “a settlement” located beyond the Green Line, Israel’s pre-1967 armistice line; it is a Jewish residential community inside Israel’s internationally recognized territory.

Notably, the English version of the same report correctly referred to it as a “kibbutz.”

In response to communication from CAMERA Arabic, Reuters commendably corrected the Arabic article by replacing “settlement” with “kibbutz” and posting the following a correction at the top of the report (screenshot below):

Correction of the Misgav Am reference in the seventh paragraph […] clarifying that Misgav Am is a kibbutz and not a settlement.

For the Arabic version of this post, see CAMERA Arabic.