“Housing segregation by race and class is a fountainhead of inequality in America,” wrote Richard D. Kahlenberg, a senior fellow at the Century Foundation, wrote in a New York Times Opinion piece last month (“Zoning Is a Social Justice Matter“). Citing themes of President Joe Biden’s campaign, he wrote:

He reflects that there is no racial justice, respect for working-class people and national unity. Perhaps no single step would do more to advance those goals than tearing down the government-sponsored walls that keep Americans of different races and classes from living in the same communities, sharing the same public schools and getting a chance to know one another across racial, economic and political lines.

Regarding at least one place in the world, the The New York Times strongly disagrees with this pro-integration view. When it comes to Jews living in Israel, the world’s only Jewish state, The New York Times seems to believe that social justice is best served by excluding Jews from cities where Arabs also reside. Citing “internal Jewish settlement in Israel,” The Times vilifies Jews living in mixed cities in Israel as anathema, not a gateway to getting to know one another and developing mutual respect and national unity.

Here, we are not referring to Jews living across the Green Line in the disputed West Bank. Indeed, New York Times opposition to and hostile coverage of Jews living in the West Bank is well established, and hardly news. 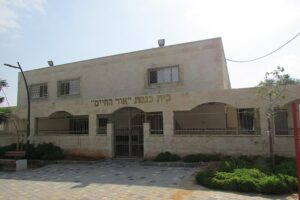 In recent days, however, The New York Times has set out into alarming new territory with hostile coverage of Jews living within cities in Israel proper, that is within Israel’s internationally recognized boundaries. If Jewish “settlement” once denoted illegitimate Jewish habitation in disputed territory, The New York Times is now expanding the term to signal illegitimate Jewish residency within cities acknowledged throughout the world as part of the Jewish state.

Consider Isabel Kershner’s striking coverage of violence in the mixed city of Lod, in central Israel (“In Mixed Israel Cities of Proud of Good Relations, A Sudden, Explosive Division,” May 13):

The anger has been stoked in recent years by a process of internal Jewish settlement in Israel. Instead of settling in the already well populated Jewish communities of the West Bank, organized groups of young, ideological, Orthodox families are now moving into economically weak and mixed cities like Lod, perceiving a religious calling to strengthen the Jewish presence there.

Many of those newer Jewish families are scattered around Ramat Eshkol, living in shared apartment buildings with Arab neighbors, Israeli flags flying outside their windows. Others live in a newly built, specially designated neighborhood for them nearby. 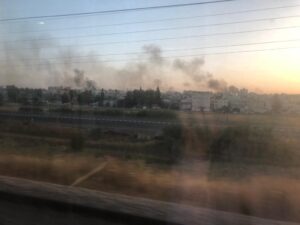 According to this account, “internal Jewish settlement in Israel,” that is Jews living in mixed Jewish-Arab cities within the Jewish state, is a valid cause for Arab grievance. The presence of Jews, especially those of the outwardly identifiable (ie religious) variety, in these Israeli cities is “internal settlement”: in other words, an illegitimate provocation.

It makes no difference if these interloping Jews live in completely integrated buildings, door to door with Arab neighbors, or in separate neighborhoods within the mixed city. Israelis flying their national flag outside their homes (gasp!) is no less a provocative offense in mixed cities in central Israel than in the heart of Jerusalem’s Muslim Quarter in Jerusalem.

Times columnist Max Fisher, for his part, writes a long, tendentious, factually-challenged essay arguing that the act of Jews moving into Lod is essentially a replay of 1948, when Israel expelled (more on that below) the city’s Arab population (“In Israel’s Rising Violence, Ripples From 1948“). He averred:

Much as with the expulsions of 1948, there is a blurry line between matters of top-down policy and bottom-up actions by Israel’s citizens. Settlers flow into parts of the West Bank that are considered crucial for the establishment of a Palestinian state, making that less viable. In recent years, according to Israeli media reports, Israeli nationalists have begun moving to mixed cities like Lod in large numbers, making them more Jewish.

Incidentally, he cites the city’s “one-third-or-so Arab minority.” But a 1999 New York Times article found: “Tensions are thick in Lod, where the Arab community, about a quarter of the population of 70,000, has watched with frustration as new housing was built for thousands of new immigrants from the former Soviet Union.” If both Times reports are correct, then the city has become more Arab, not less, in the last two decades. While Jews have moved in, apparently so have Arabs. Alternatively, the Arab population’s natural growth rate more than compensated for their new Jewish neighbors.

Fisher completely misrepresented the fate of Lod’s Arab population in 1948 to falsely argue that the Arab population in the center of the country posed a “dilemma for their newly formed state,” representing a potential “threat within” and “barrier to a definitively Jewish state.” (Prior to 1948, the city was known as Lydda.) He argued that the new state rejected the possibility of integrating the town into a “democratic, multicultural Israel” and therefore expelled the town’s Arab residents. In his truncated historical review of 1948 events, he concealed that the Arab population initially surrendered after the Israeli forces subdued the Arab fighters, and that the community accepted an offer from the nascent Jewish state to “live with us in peace.” As CAMERA’s Alex Safian previously recounted in great detail:

The overall commander of the operation in Lydda, Moshe Kelman, met with the town’s leaders to discuss surrender terms, beginning with Simon Garfeh, the Greek Orthodox Archimandrite of Lydda. Garfeh gave the following account, as recorded by historian Dan Kurzman:

“I am the Archimandrite of Lydda,” he announced. “I hope you have come in peace.”

“If it is the desire of the people of this town to live with us in peace,” Kelman assured him, we shall be very happy.” They may open their shops and resume normal life. Can you arrange for the surrender?”

“I shall try,” the prelate answered … “I shall ask the leaders of the Moslem and Christian communities to meet with us immediately in my apartment upstairs.”

He then instructed an aide to run to the Big Mosque to fetch the Moslem leaders, and sent another to his own church to bring the Christian leaders taking refuge there.

About an hour later, a dozen Arab notables were sitting in Garfeh’s living room sipping coffee and chatting with the clergyman, Kelman, and other Israeli officers. Finally, Kelman, putting down his coffee, addressed them:

“Gentlemen, the city has been conquered, and we want your cooperation. We suggest that you find the citizens who have been operating the utilities so that your people can have water and electricity without delay. But first you must accept our terms for peace: Surrender of all fighting personnel and of all arms within twenty-four hours. If these conditions are not met, we shall have to take action.”

“We agree,” one of the Arabs said with quiet resignation. “May the residents stay here if they wish?”

Fighting subsequently renewed when Jordanian armored vehicles entered the city and began firing; local Arab fighters then resumed their attacks using weapons that they were supposed to have relinquished under the surrender agreement, and a second desperate battle resumed. It was only after the Arab fighters violated their ceasefire agreement in which the civilian population was allowed to remain in peace that David Ben-Gurion ordered the expulsion. Contrary to Fisher, the nascent Jewish state had indeed initially decided that it could live with an Arab Lod in the center of the democratic and Jewish state; it was the Arabs’ own violation of the surrender terms which sealed the community’s fate, prompting their expulsion. (In her article, Kershner also wrote: “Most of the original Palestinian residents of Lod, known as Lydda in Arabic, were expelled and moved east, never to return,” history which has “a lingering fear of displacement.” She did not note the population’s acceptance — and subsequent violation — of Israel’s early offer to live together in peace.)

Desegregation For Arabs, But Not For Jews

It’s not that The New York Times consistently frowns upon desegregation within Israel. To the contrary, while it smears Jews living in mixed cities as usurpers, the paper has either completely ignored the movement of Jerusalem Arabs into Jewish neighborhoods, or depicted the integration in a positive light.

And, in covering a 2000 court ruling enabling an Arab couple to move into a community built for Jews in northern Israel, The Times did not depict the couple’s efforts to move there as a provocation. To the contrary, The Times hailed the court decision in their favor as “an important step toward equality for Israel’s one million Arab citizens,” and noted “the case raised basic questions about whether Israel could be both a Jewish and a democratic state, ideals enshrined in its declaration of independence.”

The paper’s double standard with regard to Jews and Arabs living together in Israel is encapsulated in Peter Beinart’s column last week in which he argued: “Palestinian Refugees Deserve to Return Home. Jews Should Understand.” In a piece that argues that Palestinians who left or were expelled in 1948, along with their millions of descendants, should be allowed to live in Israel, he hypocritically and simultaneously denounces Jewish efforts to recover property that they lost in 1948. While disabusing readers of the mistaken notion (according to him) that the influx of millions of Palestinians hostile to the Jewish state is “impractical,” he charges the Sheikh Jarrah real estate dispute involving just six Palestinian families with nothing less than setting the Middle East on fire, “draw[ing] Israelis and Palestinians into a conflict that appears to be spiraling toward yet another war.” Beinart’s bottom line is that flooding Israel with millions of Palestinians is not a problem, and is, in fact, quite desirable. But the presence of a few Jewish families in a predominantly Arab neighborhood in Jerusalem? That’s “combustible.”

The Limits of Integration: Jews Out

With the introduction of the new concept of “internal Jewish settlement,” The Times’ message is clear: It’s not only beyond the Green Line where a Jewish presence is illegitimate and an obstacle to peace. It is equally illegitimate and provocative for Jewish Israelis to move to mixed cities — Lod, Ramle, Acco, Haifa, Beersheba, Jaffa — within Israel’s internationally recognized boundaries.