Israeli wrongdoing, whether real or imagined, holds a special fascination for certain media outlets, which seem to get a particular thrill from putting Israel under the microscope. Writing about genuine bloodletting in other parts of the world just isn’t as much fun as indicting Israelis for supposed massacres, and thereby once again putting Zionism – and therefore the Jews – on trial.

Which brings us to the latest in this genre, “Lydda, 1948” (The New Yorker, October 21, 2013) written by the well-known and talented Israeli journalist Ari Shavit. In Shavit’s very deceptive and even contradictory recounting, Israeli soldiers led by a certain Lt. Col. Moshe Dayan, and armed with:

a giant armored vehicle mounted with a cannon, menacing half-tracks, and machine-gun-equipped jeeps

joined other Israeli forces attacking Lydda (and its neighbor Ramle) during Israel’s War of Independence. Led by Dayan’s marauding forces the Israelis took control of “key positions” in the town, but the next day fighting flared again, and:

in thirty minutes, two hundred and fifty Palestinians were killed. Zionism had carried out a massacre in the city of Lydda.

Is this really what happened? Well let’s start with the matter of the “giant armored vehicle,” a phrase which could only stun anyone the least bit familiar with Israeli military history. It was actually just a lightly armored scout car – with regular inflated rubber tires – standing about seven feet high and just six feet wide. Here’s a picture of the actual vehicle, at the Israeli Armored Corps Museum at Latrun: 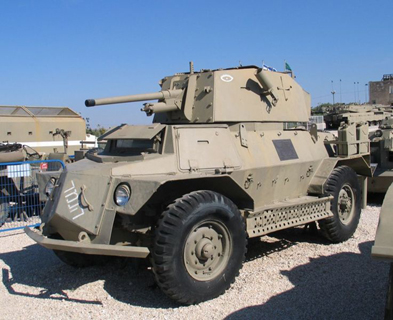 To put this in perspective, that’s about the size of a Ford Expedition SUV (the Expedition is slightly shorter at 77 inches high, but wider at almost 80 inches across): 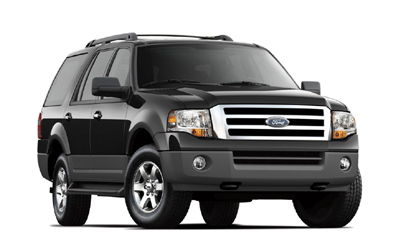 The armored car, known as a Marmon-Herrington, and made in South Africa, was used by Allied forces in WW2, mostly as a reconnaissance car, and a number of them were given to the Arab Legion (as Jordan’s army is known) by their British allies after the war.

The one in question was abandoned by Jordanian forces when it overturned in a ditch. Spotting it, and knowing that possessing this one vehicle would be a major upgrade to his lightly-equipped battalion, Dayan and a volunteer braved sniper fire to get a cable on the car, right it and tow it out of the ditch. The Israeli soldiers nicknamed the thing the “Terrible Tiger” and after a few hours practice with the car immediately put it to use in their attack on the garrison towns of Lydda and Ramle.

Though outnumbered by the town’s defenders, Dayan and his men used speed and surprise to subdue the town, which surrendered.

The overall commander of the operation in Lydda, Moshe Kelman, met with the town’s leaders to discuss surrender terms, beginning with Simon Garfeh, the Greek Orthodox Archimandrite of Lydda. Garfeh gave the following account, as recorded by historian Dan Kurzman:

“I am the Archimandrite of Lydda,” he announced. “I hope you have come in peace.”

“If it is the desire of the people of this town to live with us in peace,” Kelman assured him, we shall be very happy.” They may open their shops and resume normal life. Can you arrange for the surrender?”

“I shall try,” the prelate answered … “I shall ask the leaders of the Moslem and Christian communities to meet with us immediately in my apartment upstairs.”

He then instructed an aide to run to the Big Mosque to fetch the Moslem leaders, and sent another to his own church to bring the Christian leaders taking refuge there.

About an hour later, a dozen Arab notables were sitting in Garfeh’s living room sipping coffee and chatting with the clergyman, Kelman, and other Israeli officers. Finally, Kelman, putting down his coffee, addressed them:

“Gentlemen, the city has been conquered, and we want your cooperation. We suggest that you find the citizens who have been operating the utilities so that your people can have water and electricity without delay. But first you must accept our terms for peace: Surrender of all fighting personnel and of all arms within twenty-four hours. If these conditions are not met, we shall have to take action.”

“We agree,” one of the Arabs said with quiet resignation. “May the residents stay here if they wish?”

Shavit also keeps from his readers the fact that the hard-pressed Israelis withdrew a significant part of their forces from Lydda after the surrender, since they were needed elsewhere. Dayan’s battalion, for example, headed south, to take part in the battle for the Negev. (Moshe Dayan, Story of My Life, p. 112)

The very next day, July 11, the Jordanians sent a patrol to the outskirts of the town, made up of one tank and two armored cars, to probe Israeli strength. Shavit mentions this – he says it was “two Jordanian armored vehicles.”

But for some reason he doesn’t call them “giant armored vehicles,” or “menacing.” Perhaps only Israelis have giant armored menacing vehicles.

Shavit does say that the “two vehicles were of no military significance.” So one of these vehicles in Israeli hands was of great significance, but two in Jordanian hands were, for some reason, irrelevant.

Whatever
the explanation for these contradictions, the Jordanian patrol ran into trouble, and had to shoot its way out of town. The residents, apparently thinking this was a Jordanian assault to retake the town, began attacking the remaining Israeli soldiers. Five Israeli guards stationed outside the Dahmash Mosque were the first to be killed, and almost immediately the entire town erupted in shooting. (Kurzman, p. 515)

Despite the surrender agreement, and the promise to turn over arms, the Israelis, now numbering only 500 men, had to once again take the town in another desperate battle.

Fighting house-to-house to root out snipers, and this time giving no quarter, within an hour much of the town was once again under control, and an estimated 200 Arabs were dead.

But the Dahmash Mosque, was still fighting, held by an estimated 70 fighters, and with an unknown number of others inside. Rather than launch a costly frontal assault, Lt. Col. Kelman decided to breach the mosque’s walls with an anti-tank weapon, known as a PIAT, and then have a platoon rush the building.

After the PIAT was fired, the men that stormed the building found that the defenders were dead, killed by the effects of the armor piercing projectile in the confined space of the mosque. (Kurzman, p. 515-516)

The second battle to take Lydda was over, but now facing the Israelis was the difficult question of what to do with the inhabitants. The town leaders, knowing that they had broken their word to surrender and disarm, and knowing in particular that the five Israeli soldiers outside the mosque had been massacred and their bodies mutilated, feared that the Israelis would now return the favor.

It’s hardly surprising that the Israelis were in no mood to give the residents another chance to break their promise to live in peace. But, of course, the Israelis also didn’t execute or “massacre” them. Instead, the residents were ordered to evacuate the city and move towards the Jordanian lines and Ramallah.

The obvious and quite reasonable decision that the residents had sealed their own fates and had to leave, is the occasion for endless hand wringing and rending of garments by Shavit, no doubt much to the delight of his New Yorker editors.

And Shavit can hardly contain himself:

• Zionism had carried out a massacre in the city of Lydda.

• Zionism had obliterated the city of Lydda.

•Lydda is the black box of Zionism.

• For decades, Jews succeeded in hiding from themselves the contradiction between their national movement and Lydda.

• For forty-five years, Zionism pretended to be the Atid factory (an olive oil soap factory near Lydda) and the olive groves and the Ben Shemen youth village living in peace with Lydda. Then, in three days in the cataclysmic summer of 1948, Lydda was no more.

• Like the ancient Jews, the people of Lydda went into exile.

• … either reject Zionism because of Lydda, or accept Zionism along with Lydda.

And drearily on and on.

Except if you know the facts – that the town surrendered, went back on its word, massacred and mutilated Israeli soldiers, and then despite all this the residents were allowed to leave unharmed – the picture looks very different.

It’s a picture that the New Yorker doesn’t want its readers to see – their long record of anti-Israel agit-prop makes that clear. What is not clear is why Ari Shavit played along.