After CAMERA informed journalists of the problems in Abdulrahim's story, the New York Times corrected its piece, adding information from the military noting that Zakarneh, who the paper had cast as innocent, was killed after shooting at Israeli troops from a motorcycle. Neither the correction nor the updated piece, though, informs readers that Islamic Jihad also admitted Zakarneh was killed while confronting soldiers.

A story in today’s New York Times paints a neat symmetry between Israelis and Palestinians killed in the conflict this spring.

In the piece, Jerusalem bureau chief Patrick Kingsley writes of

a sharp rise in violence across Israel and the occupied territories over the past month, beginning with the deadliest wave of Arab attacks within Israel in more than a half decade. The attacks killed 14 and prompted an Israeli crackdown in the occupied West Bank, which killed at least 15 Palestinians” (links in original).

Arab attacks killed 14. An Israeli crackdown killed 15. One is cast as a morbid reflection of the other. But such an equation is only possible only because Kingsley obscures from readers the glaring, fundamental distinctions.

Those killed in Israel — Jewish, Arab and Druze Israelis along with two Ukrainians — were victims of terror attacks. They were intentionally murdered while working, shopping, riding a bike, socializing at a bar, or taking their toddler for a walk, killed by attackers who mowed down their innocent targets with random violence. Several of the attackers were inspired by the Islamic State (ISIS) terror group.

By contrast, a large proportion the Palestinians killed in the West Bank died during clashes, when Israeli soldiers conducting anti-terror operations were attacked by armed Palestinians, including members of internationally designated terror organizations.

The passage does include a link from the phrase “Israeli crackdown.” Does that, at least, lead to some reasonable level of detail?

To the contrary, the story at the other end of the link only further obfuscates, going out of its way to convince trusting readers that all of the Palestinians were non-combatants. The stage there is set with a subheading that, as with Kingsley’s language, suggests an equivalence: “At least 14 Palestinians have been killed in a widespread Israeli military operation in the West Bank, launched in response to a string of attacks in Israel that killed 14 people.”

The rest of the April 16 article by Raja Abdulrahim, who as a college student had defended Hamas and Hezbollah, picks up from there, with opening paragraphs that prompt readers to imagine random violence by Israel:

… [Palestinian] residents are staying up late waiting for the next military raid in their city.

“I fear I could be going to work and suddenly come upon Israeli soldiers in the street and they could shoot me,” said the mother of three girls, twin 7-year-olds and a 3-year-old. “I could die, I could become paralyzed. Then who is going to take care of my daughters?”

Mustafa Sheta, the theater’s manager, said he feared taking his four kids to school each morning, worried Israeli snipers might still be positioned on rooftops.

Ms. Awartani said her sister-in-law refused to go to sleep before her two university-age sons did, fearful that they would leave the house at night and be shot dead during a raid.

“We’re all afraid of losing our children,” Ms. Awartani said.

Abdulrahim's references to specific victims are meant to further the impression that the Palestinian casualties, like the Israeli ones, were struck down by arbitrary violence. Readers are given no indication that any one of the 14 Palestinians killed were confronting Israeli troops. The piece provides details about only three of the casualties: Mohammed Zakarneh, Ghada Sabteen, and Mohammad Assaf.

At least 14 Palestinians have been killed by Israeli forces since the beginning of Ramadan on April 2, including 16-year-old Mohammad Zakarneh, who was shot and killed on Sunday during one of the Israeli raids in Jenin, his mother said. He was leaving work at a produce shop and was heading home to break his Ramadan fast. The Israeli military would not comment on his death.

Also killed was Ghada Sabteen, 47, a widow and mother of six who was shot in the leg as she approached soldiers at a checkpoint near Bethlehem. Palestinian authorities have called for an investigation into her killing, but the Israeli military has not commented on whether it would conduct one.

On Wednesday, Mohammad Assaf, a 34-year-old lawyer, was shot in the chest and killed during a raid in the city of Nablus, reportedly shortly after dropping his children off at school.

The New York Times’ handling of the first example — the 16-year-old killed while simply heading home from work and about whom the Israeli military had no comment — is telling.

According to the Palestinian Authority’s Wafa News Agency, Al Jazeera, the Palestine Chronicle, Agence France Presse, and Israeli media outlets, Zakarneh was actually 17 years old. If so, the Times error is a relatively minor detail compared to Abdulrahim's other mischaracterizations.

Contrary to the reporter’s claim, the Israeli military did indeed comment on the incident. A Times of Israel piece published several days before Abdulrahim’s story notes:

According to the IDF, the soldiers entered the area, in the northern West Bank, in order to arrest two brothers of Ra’ad Hazem, the terrorist who killed three Israelis in a terror attack in Tel Aviv on Thursday.

The military said it shot Zakarneh after he fired at the soldiers from a passing motorcycle. 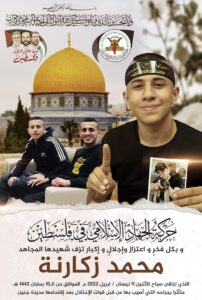 So much, then, for Abdulrahim’s third detail, too: her claim that Zakarneh was merely coming home from work. Indeed, a statement by the Palestinian terror group Islamic Jihad, which was also published days before Abdulrahim’s article, confirmed that Zakarneh (who they also describe as a 17-year-old) was killed “while confronting [Israeli] forces.” An Islamic Jihad martyr poster portrays Zakarneh as member of terror organization and shows him holding a rifle.

The New York Times account of Ghada Sabteen is less egregious, but still misleading. Abdulrahim tells readers that Sabteen “was shot in the leg as she approached soldiers at a checkpoint.” Readers can hardly be expected to glean from this language that Sabteen was running toward the soldiers at close range, as video of the unfortunate encounter showed.

The third individual, Mohammad Assaf, was indeed tragically killed in the crossfire during clashes between other Palestinians and Israeli troops. But he is seemingly an outlier among the 14 Palestinians, whom Abdulrahim leaves readers to conclude were innocent victims of Israeli violence. 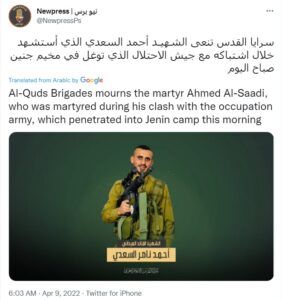 Abdulrahim and her editors seemingly don’t want her readers to know about these acts of violence by many of the Palestinians killed, because there isn’t a hint about it in her New York Times story.

The distortions are not surprising from a newspaper that’s increasingly more interested in peddling an anti-Israel narrative than in informing readers about the realities in the region.