One America News Network (OANN), which reaches tens of millions of viewers, exhibits a split personality when covering the Palestinian conflict with Israel. On the one hand, the conservative network consistently presents informative and balanced commentary on the conflict during weekday evening hours by Graham Ledger (8 p.m. Eastern) and Liz Wheeler (9 p.m. Eastern) when the subject comes up, which is occasionally. On the other hand, news segments and news crawlers occurring particularly during non-evening hours tend to be biased against Israel when the subject comes up, which is routinely.

A recent example of this is the January 2 crawler item, “The number of Jewish settlements built on the West Bank has increased by thousands since President Trump took office.”  Yes, the item reads exactly as shown here. The claim “… settlements … increased by thousands” is an absurdity. But even if the phrase had said “settlement housing units” instead of “settlements,” the item would still be problematic (more below).

That day’s programming also included a misleading segment monitored during the 6 a.m. hour dealing with the conflict. An instance of the crawler item referred to above occurs at 1:26 minutes into this segment: 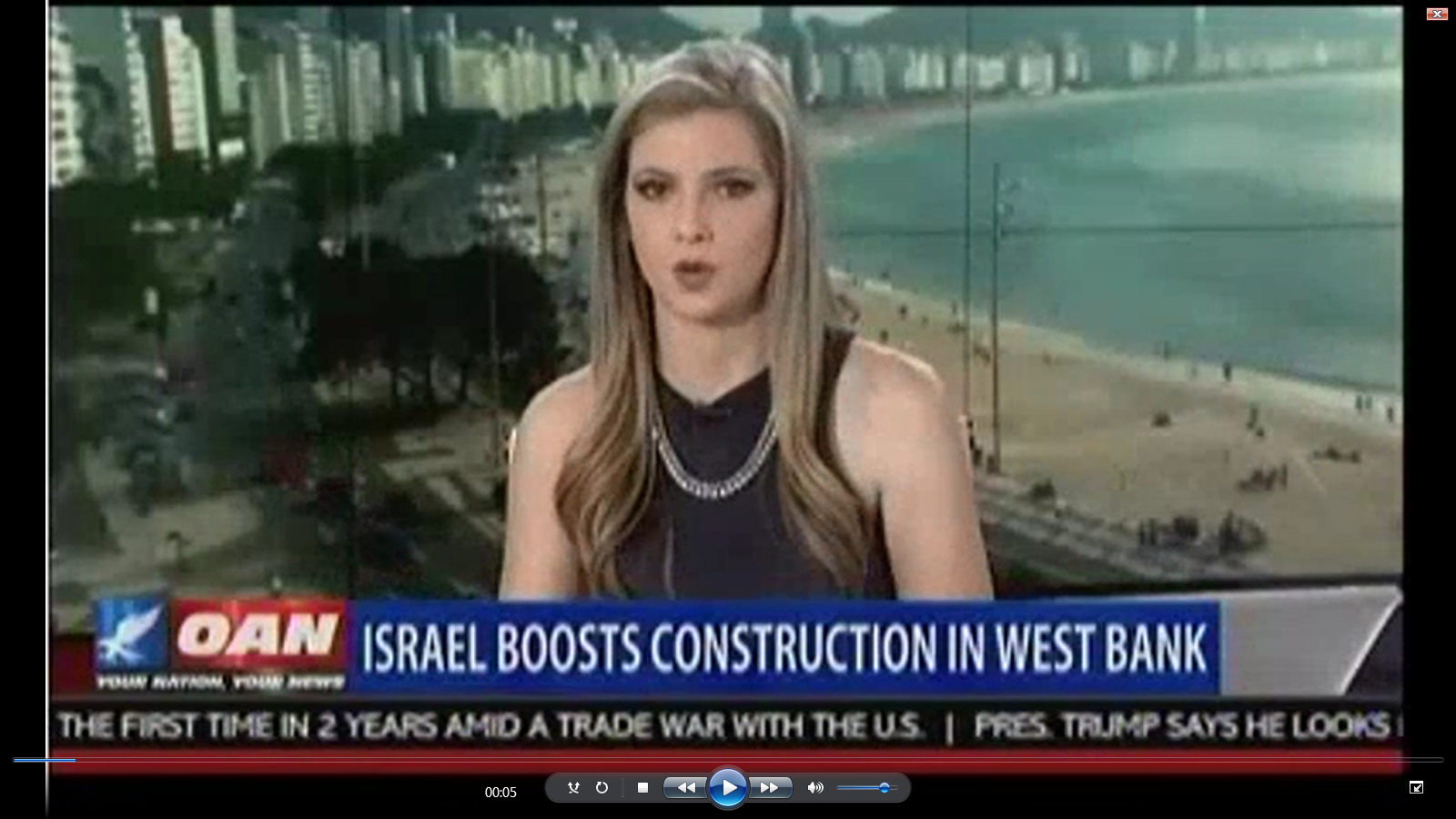 The segment, containing West Bank scenes featuring two unidentified speakers, tells a contrived story that can be summarised as:  “The current U.S. presidential administration consents to Israeli actions aimed at thwarting the possibility of any peace agreement with the Palestinians”:

Israel is boosting its construction of homes in the West Bank… Along with moving the U.S. embassy to Jerusalem, President Trump may be helping Israel with other policy goals. According to reports, the number of Jewish settlements built on the West Bank has increased greatly since he took office… Just this last week an Israeli committee approved the construction of thousands of new settlement homes. The last time construction went on at this pace was in 2013 in what was seen as a protest against former Secretary of State John Kerry’s efforts to strike a peace deal between Israel and Palestine [sic]… In 2018, we saw yet another year of a large scale approval for settlement housing units … The lands were captured from Palestine [sic] in 1967 and the international community considers them to be occupied territory. Construction in this area now complicates the potential peace plan between Israel and Palestine [sic].

Countering this misleading and fake news

• OANN’s repeated use of the term “Palestine” as if it’s a nation, as has been OANN’s practice for years when referring to the West Bank (or Palestinian territories), is misleading and at odds with prevailing journalistic practice. The problem is that there has never been a sovereign nation of “Palestine” though the term could refer to an imputed Arab objective. Another problem is that this usage is a staple of anti-Israel advocacy groups. “Palestine” persists on OANN – on January 17, an instance of “Palestine” occurred at 6:28 a.m. during a brief about Malaysia.

• The claims about the increase in the number of settlements or settlement homes are problematic. Recent (December 2018) sourced reports paint a different picture. Here are examples from publications on different parts of the political spectrum: UN: Israeli Construction in West Bank Settlements at a Record Low (Haaretz) and Settler housing starts drop 52% in third quarter of 2018 (Jerusalem Post).

• The segment states, “The lands were captured from Palestine in 1967 and the international community considers them to be occupied territory.” However, OANN news segments rarely, if ever, point out the fact that Israel took control of the territory of the West Bank as a result of successful self-defense in the 1967 Six-Day War. The West Bank is not sovereign territory of any country, but rather land disputed by both Israel and the Palestinian Authority. It was illegally occupied by Jordan from 1948 until 1967, when Israel took control. Meanwhile, Israel remains the legal, obligatory military occupational authority in the West Bank pending conclusion of a negotiated agreement on the territories’ final status. Furthermore, the West Bank Palestinians are self-governing with Israeli personnel only entering Palestinian communities to pursue terrorists.

• The notion that the settlements are a main obstacle to peace between Israelis and Palestinians is a non-starter. First, the Arabs consistently refused to consider peace with the Israelis prior to the initiation of the settlements enterprise which took place only after the culmination of the 1967 War. Second, these settlements have never constituted more than only six percent of the total land mass of the entire West Bank.

The segment states: “Construction [by Israelis] in this area [of the West Bank] now complicates the potential peace plan between Israel and Palestine.” It should be  pointed out that the reality is that under the Oslo Accords, the West Bank is designated as consisting of three areas: A,B, and C. At least 90 percent of the Palestinian Arabs live in areas A and B, governed by the Palestinian Authority, constituting 40 percent of the West Bank. Area C, which is 60 percent of the territory, and is mostly vacant land, is under Israeli control. The vast majority of the Israeli settlers reside on Jewish-owned land in Area C.

Moreover, as has been envisioned in various peace plans, Area C is expected to be handed over to the Palestinians as part of a future Palestinian state, with Israel retaining various areas contiguous to Israel. The “West Bank,” or Judea and Samaria (as referred to both biblically and historically), constituted the heartland of ancient Israel. Communities of Jews had been working the land there long before the Arab conquest of the area.

Why do OANN’s news segments and news crawler items dealing with the Palestinian-Israeli conflict exhibit the journalistic malpractice shown here? Is it not due to biased or incompetent news writing/editing? So far, the network’s chief decision maker, Charles Herring ([email protected]), OANN’s president, has been non-committal, at least publicly, about the matter. For the sake of OANN’s reputation, Mr. Herring should take remedial action to eliminate the problem.