If you don’t understand Israel’s experience during the Second Intifada, a multi-year a wave of Palestinian terror attacks that began 20 years ago this month, you can’t understand the state of the Palestinian-Israeli conflict today.

The bloody half-decade that followed Palestinian rejection of a peace plan in 2000 – a traumatic era in which Jewish civilians were hunted, targeted, and killed on buses, in restaurants, and at dance clubs – shattered Israeli dreams that peace was forthcoming, simply matter of offering Palestinians statehood. It convinced the country that peace depended less on Israeli compromise and more on a change of mindset among Palestinian leaders who clung to the dream of eliminating the Jewish state. And it underscored for Israelis that the lives of their children depend, if not on an agreement with the Palestinians, then on a unilateral separation coupled with effective security measures.

When Israelis think of the terror wave, they remember the Park Hotel on the Mediterranean coast, where in 2002 a Palestinian entered a dining hall packed with Jews celebrating Passover and murdered 30 civilians, most of them elderly; the massacre of 21 people, a majority of them teenage girls, waiting to enter the Dolphinarium dance club in Tel Aviv; and the ruins of the Sbarro pizzeria, which was packed with children when it was selected as the target of a Palestinian suicide bomber, who killed 15 civilians.

20 years since the start of the Second Intifada. Hard to imagine anything which has left more of a mark on Israelis. And hard to imagine American Jews under the age of 28 with any understanding of it at all. An enduring multidimensional fracture.

But that experience is largely missing in what media coverage there was of the anniversary of the violence.

Instead of helping readers understand how these and other horrific Palestinian attacks indelibly scarred Israelis, some media outlets seemed more interested in marking the anniversary of the intifada with yet another lopsided recitation of the Palestinian narrative of the conflict.

An item on AP Planner, for example, marked the anniversary with an announcement about an Israeli “provocation.”

“20th anniversary of Israeli party leader making ‘provocative’ visit to Islamic shrine,” the headline read. The body of the Planner announcement referred to that shrine as the “third holiest shrine in Islam.” It states that “Palestinians and Israeli liberals denounced the visit as a dangerous provocation,” which was set against the background of “the failure of the Camp David peace process.”

But there was no mention of the fact that this third holiest shrine in Islam is actually the first holiest site in Judaism. (The item did at least acknowledge, incompletely, that “Jews revere the esplanade as the site of the temple destroyed in AD70.”) There was no mention that the “failure” of the peace process was catalyzed by Palestinian leader Yasir Arafat’s rejection of Bill Clinton’s peace plan. And no mention of terrorism – not a single Palestinian suicide bombing, nor a single Jewish death.

In effect, the AP Planner placed blame entirely on Israel for the intifada, though readers were left in the dark about what the “uprising” looked like.

This account of Israel’s supposed responsibility for the Palestinian attacks treats the Palestinian narrative as unimpeachable fact, while ignoring evidence that suggests different causes for the unrest.

A Pre-Planned Wave of Violence

In 2001, for example, a Palestinian cabinet minister announced that the violence was pre-planned. “Whoever thinks that the Intifada broke out because of the despised Sharon’s visit to the Al-Aqsa Mosque is wrong,” Palestinian communications minister Iyad Falouji said, “even if this visit was the straw that broke the back of the Palestinian people.” 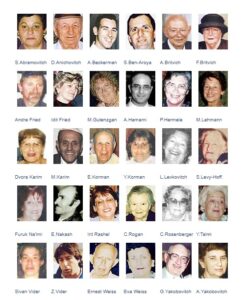 The mostly elderly victims of the Park Hotel bombing on Passover were targeted by a Palestinian suicide bomber.

“This Intifada was planned in advance, ever since President Arafat’s return from the Camp David negotiations,” he continued.

The Associate Press should know this, since they themselves covered the admission: “A Palestinian Cabinet minister said Friday that the 5-month-old uprising against Israel was planned after peace talks failed in July, contradicting contentions it was a spontaneous outburst by Palestinians,” acknowledged  a March 2001 AP story.

Other Palestinians leaders have said likewise. After speaking with a Palestinian official, David Samuels wrote in the Atlantic that the violence “began with the intention of provoking the Israelis and subjecting them to diplomatic pressure.” Yasir Arafat already intended to use violence, the official, Mamduh Nofal, told Samuels. And Sharon’s visit to the Temple Mount was seized upon as a convenient time to start:

As a member of the High Security Council of Fatah, the key decision-making and organizational body that dealt with military questions at the beginning of the intifada, Nofal has firsthand knowledge of Arafat’s intentions and decisions during the months before and after Camp David. “He told us, ‘Now we are going to the fight, so we must be ready,'” Nofal remembers. Nofal says that when Barak did not prevent Ariel Sharon from making his controversial visit to the plaza in front of al-Aqsa, the mosque that was built on the site of the ancient Jewish temples, Arafat said, “Okay, it’s time to work.”

In its piece marking the 20th anniversary of the intifada, AFP reported that

the second intifada broke out after right-wing Israeli opposition leader Ariel Sharon visited the Al-Aqsa mosque compound in annexed east Jerusalem on September 28, 2000. The move was seen as a provocation by Palestinians and violent clashes between them and Israeli forces followed.

Note how the wire service conceals that Jews regard the site as the Temple Mount, the holiest site in Judaism, a fact that could help explain why Sharon visited the site. Even worse, AFP describes the violence as being between Palestinians and “Israeli forces,” a stunning erasure of the terrorism that targeted Israeli civilians.

This rewriting of history is perhaps because AFP prefers to focus squarely on Palestinian grievances. Readers are introduced to checkpoints, blockades, barriers — but there is no mention of even a single Israeli death.

Reuters, for its part, at least briefly mentioned suicide bombings in a pair of stories marking 20 years since the intifada. Each story focuses on one side of the conflict. But it’s only the story about Palestinian views that uses colorful language to capture the pain of Palestinians: They are described as harboring “vivid childhood memories” of violence from the intifada, and carrying “trauma” stemming from those years.

The story about Israelis, by contrast, opts for more sterile language. Israelis experienced “fear.” The killings made Israelis “very angry.” It all strikes the reader as less than, and worse than, trauma.

Indeed, here again it’s Palestinian victimhood that seems more interesting to the reporters. In the story focused on Palestinians, a young Palestinian recounts her lived experience of Israeli soldiers who, she says, “took over the upper floors of her family’s building to fire into Jenin’s refugee camp, considered a stronghold for Palestinian militants.”

The story about Israelis includes no such personalized accounts of Palestinian attacks on Israelis.

Indeed, though nominally about the Israeli experience, the latter piece is framed in terms of Israel’s coolness toward of the Palestinians, who are treated as “the other,” readers are told, and hidden away behind walls by disinterested Israelis who “prefer not to see them.”

In the story about Palestinians, by contrast, readers are shown a portrait of an attractive 24-year-old Palestinian woman posing in front of Israel’s security barrier; another of a 17-year-old Palestinian woman who appears to be a student; an artful shot of a young Palestinian man in the Gaza Strip; and an Oct. 1, 2000 photo in which, according to the caption, “Palestinian police exchange fire with Israeli soldiers.” (Wire reports from the time revealed more informative detail about what the latter picture showed: “Near Netzarim, scores of gunmen, cheered on by hundreds of Palestinian rock-throwers, took aim at a fortress-like Israeli outpost. One bearded gunman knelt behind a low wall as he fired his M-16 assault rifle. One demonstrator pleaded with a more hesitant shooter to hand over the weapon so he could have a go,” the AP reported on Oct. 1) 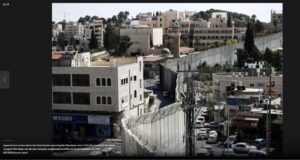 A typical image from Reuters’ slideshow about Israelis and the intifada. 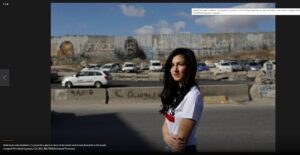 A typical image from Reuters’ slideshow about Palestinians and the intifada.

In the Reuters piece about Israelis, reporters manage to find an Israeli to quote who faults his country because, he says, it “did not make wise use of the positive conditions we had to hand” to bring about a more successful result with the Palestinians. And what of Palestinian responsibility for unsuccessful attempts at peacemaking? Arafat’s rejection of Clinton’s peace proposal is whitewashed in the story about Palestinians, which describes the Palestinian leader as merely having “failed to clinch a peace agreement with Israeli Prime Minister Ehud Barak.”

The Reuters articles, meanwhile, minimize the uniquely vicious attacks against Israelis by drawing a false moral equivalence between Israeli military operations and Palestinian suicide bombers. The reporters describe the intifada as comprising “suicide bomb attacks on Israeli cities, and Israeli air strikes and tank raids on Palestinian towns,” as if the targets were, in a neat parallel, those Israeli and Palestinian cities and the towns.

This is specious. It was Israeli civilians who were largely the targets of Palestinian suicide bombings, while the Israeli military strikes targeted the leaders and operatives of terror organizations who sent those suicide bombers.

And so, too, when the articles summarize the intifada as an “armed conflict in which more than 3,000 Palestinians and 1,000 Israelis were killed,” it again misleads and misses the bigger picture. The vast majority of Israelis killed during the intifada were civilians. The same can’t be said about the Palestinian casualties, among whom civilians were, tragically, unintended casualties of strikes on militants.

The eagerness of media organizations to downplay, or even ignore, the defining characteristic of the Second Intifada — the relentless wave of Palestinian terror attacks targeting Israeli civilians — has come to be expected from slanted journalism that, in the scathing account of former AP reporter Matti Friedman, “tells us far less about Israel than about the people writing the news.” It is expected. But it remains unacceptable.