Avaaz is an international organization that promotes activism through online petitions and organized protests. It was described by The Guardian as “the globe’s largest and most powerful online activist network.”

With a purported 44 million members in 194 countries worldwide, and with no fewer than 3 million followers on Facebook, Avaaz claims its members have “taken action” over 325 million times since its inception.

The activist network is now promoting a petition that went viral, calling for action against the destruction of a Palestinian community. The petition has the catchy headline: “They’re asking us for a miracle.”

At the time of writing, some 860,000 people have signed the petition aimed against the Israeli government. Every few seconds another person adds their name to this campaign.

The text informs its readers that:

Near the hilltops of the village of Bethany, 2000 years ago, it is said that Jesus Christ brought Lazarus back to life.Today those hilltops are home to an indigenous community who are about to be bulldozed into the ground. Their homes, land, andway of life completely wiped out.

But these brave families refuse to fade silently into the darkness. Instead, they are taking a huge risk, rising up against the bulldozers by nonviolently “sitting-in” their homes. They’re betting on a miracle: that their act of courage will inspire people around the world to help stop the bulldozers before they crush them.…

More narrowly the petition is targeted to “the families of Pope Mountain, and leaders around the world”:

As citizens from around the world, we want you to know that you are not alone. We stand with you and support your nonviolent sit-in to defend your homes, land and way of life. We call on all world leaders to demand that Prime Minister Netanyahu cancel all plans to destroy this community. We specifically call on the European Union and International Criminal Court to urgently make clear to the Israeli government that destroying this community crosses red lines and will have serious repercussions.

No matter how many times you reread the text, the lack of factual information stands out. While the petition is filled with pathos and a heart wrenching description of families facing eviction while waiting for a miracle to save them, it is devoid of any specifics explaining why the community is facing this tragedy. The context of where the community is situated or why it is facing such a brutal eviction is mysteriously left out.

Here are the missing facts of the story.

Bethany, the town mentioned in the petition, is the ancient post-biblical Jewish town of Beit Anya. According to the New Testament, it is the place where Jesus brought Lazarus back to life.

Today the Palestinian city of Al-Eizariya resides on the ancient ruins of Beit Anya, located near the Israeli city of Ma’aleh Adumim. The Bedouin community facing eviction are members of the Ja’alin tribe which mostly resides in the West Bank territory commonly known as E1.

The Ja’alin tribe illegally settled in an area that is part of the territory allocated to the city of Ma’aleh Adumim. The buildings they constructed are illegal in every aspect: They were built without a permit, on land they don’t own (its partly state land and partly private land not owned by the tribe), and lastly the houses do not match the local zoning plan.

The Ja’alin tribe claims that they are Palestinian Bedouins who have lived on the land for decades. According to their own narrative, they were evicted in 1948 from their lands in the Negev desert in southern Israel, roamed, and finally settled in the current location before 1967.

In the Avaaz petition, they are presented as the “indigenous” community. However, even their own narrative shows that their claim to the land is at best a few decades old.

There are also serious questions whether their narrative is accurate. Replying to a Supreme Court petition filed by the Ja’alin residents, the Israeli government stated that aerial land photographs show that until 1995 the area was almost empty. The vast majority of the buildings were constructed only after 1995.

The government’s argument is corroborated by aerial land photographs of Israeli NGO “Bimkom.” These photographs are of the community of the Jabal al baba (which is apparently the “Pope Mountain” that the petition cites ). 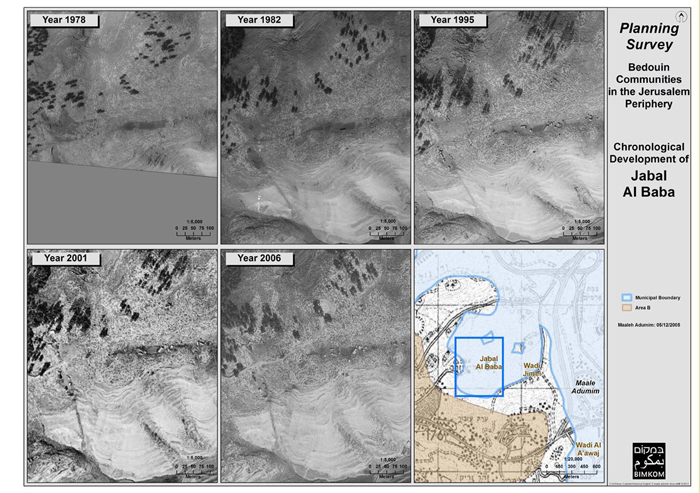 Why does Israel want to destroy the buildings?

As part of its larger plan to settle and legalize Bedouin communities throughout Israel and the territories, Israel is advancing several plans intended to facilitate the Bedouin community in legal neighborhoods. So far, Israel has invested millions of shekels in a plan that would provide 36 plots of land capable of housing 70 families.

In August 2015, the state finished preparing the intended plots and made them available for settlement. This involved the leveling of the plots and the building of water, sewage and electric infrastructure. Building permits were issued in advance. The plots, half a Dunam each (0.05 Hectare), are located on state land. They are meant to be registered in the name of the Bedouin families free of charge, allowing them to build permanent housing.

And just how far will the Ja’alin tribe have to move in order to receive their free and legal plots of land?

The Ja’alin tribe would have to move about an entire … single kilometer from their current illegal residence. 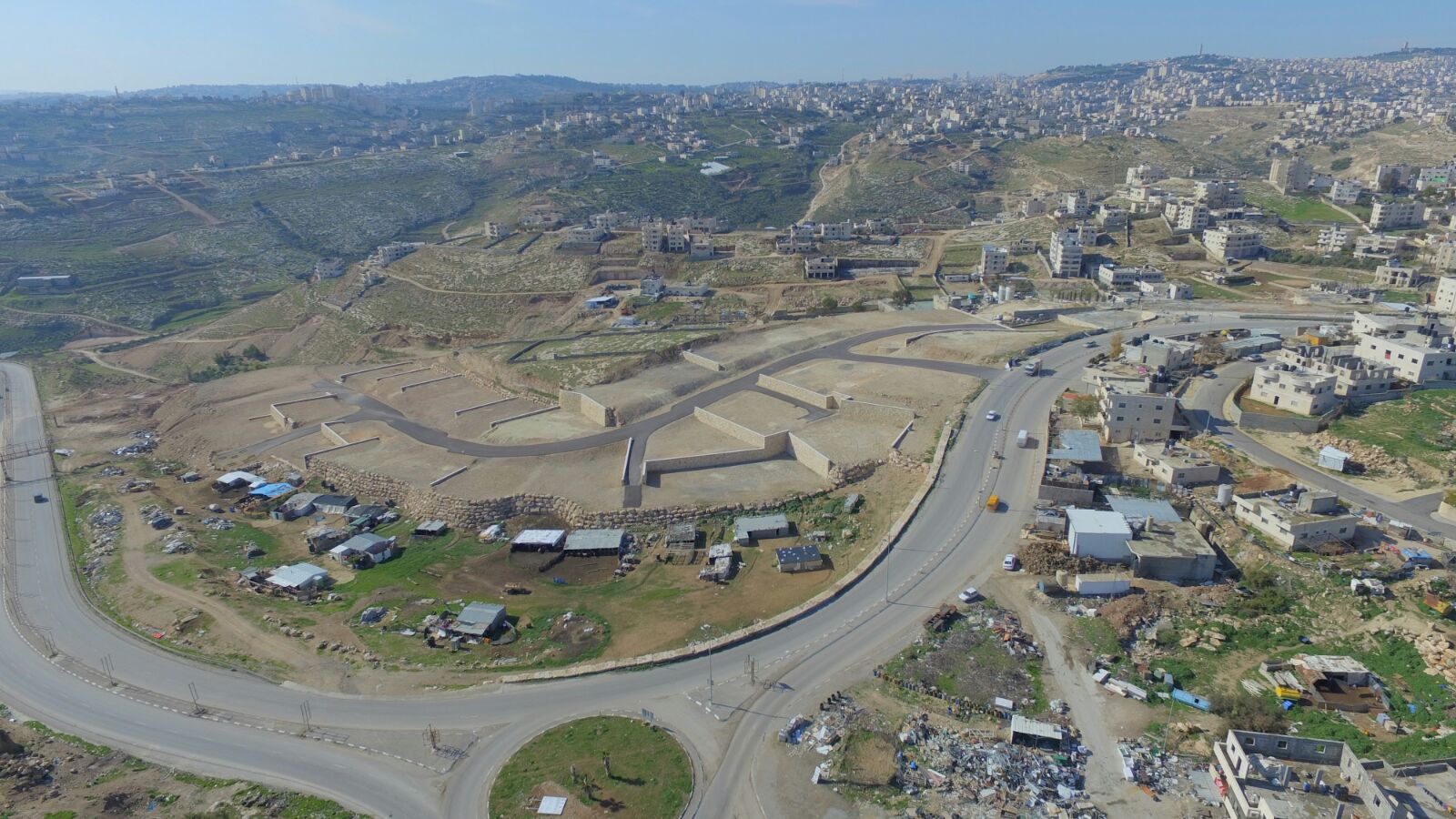 In the above pictures you can see the plots that have been prepared for the Ja’alin families. Similar plans are in the works for the entire tribe.

This is the full scale of the “destruction” of a community mentioned in the petition, signed by over 860K people.

So why don’t the Bedouin want to move?

A possible answer is spelled out in the state’s response in the court petition:

In conversations [with the civil authority] with Bedouin representatives we learn that many of them are interested in the plan and wish to receive land and build a permanent house. A major reason for their hostility to the plan is the Palestinian Authority and other groups,
whose interests aren’t identical to the interests of the people living in the area.

The state’s answer alludes to pressure by the Palestinian Authority and “other groups.” Palestinian residents who are interested in moving to the newly offered plots will not speak openly about it, possibly because they fear for their lives.

In another court case, regarding an (ultimately rejected) claim of ownership to the land intended for resettlement, the authorities described what happened when work began:

With the beginning of the work, we were stopped by people claiming to be representatives of the Palestinian Authority who terrified the construction workers hired for the work.

As a result of the scare tactics, the Israeli authorities were forced to protect the construction workers.

An interview with the Bedouin Sheik Mukhtar Farid Abu Mashhour, a resident of the area, tells a similar story. In 2003, asked by a journalist what assistance they receive from the Palestinian authority, he raised his hands in anguish and bemoaned:

“How do they help? They buy them caravans so they will continue to live there…they give them storage units and say it’s an improvement in living standards. This isn’t help – its exploitation. They bring delegations of people from abroad to attract donations. These funds aren’t given to the Bedouin. It’s convenient for them that they live here so wretchedly.”

In the same article, Maher Gnam, described as the “deputy manager of the local government in the Palestinian Authority,” explains:

“These residents live in a strategically important position where there is a war against the policy of the occupation. We aid them and so block the Israeli policy that wants to expand the occupation in this area.”

How the Avaaz anti-Israel manipulation works

The petition provides the reader with no concrete facts. Instead it relies on the emotive use of language. Bulldozers, destruction, miracle, inspiration — these are empty slogans and rallying cries. The people who sign the petition are voicing an amorphous objection to a vague and unspecified “destruction” of a Palestinian community of which they know nothing about.

Finally, the picture used to illustrate the campaign is another example of “Pallywood.” Many pictures exist of the woman hugging this particular olive tree and they are all from 2005, with no connection whatsoever to the Ja’aalin tribe, the plan to relocate the tribe or even the specific area. It is pure propaganda.