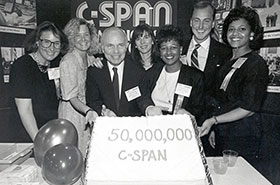 In November 2018, Cable-Satellite Public Affairs Network (C-SPAN), with a reach of millions of viewers, featured an analysis of the Arab-Israeli conflict based on distorted history. It was hosted by the National Council on U.S.-Arab Relations (NCUSAR), an Arab-centered organization hostile to Israel. This hostility was reflected in the choice of participants for the 79-minute discussion. 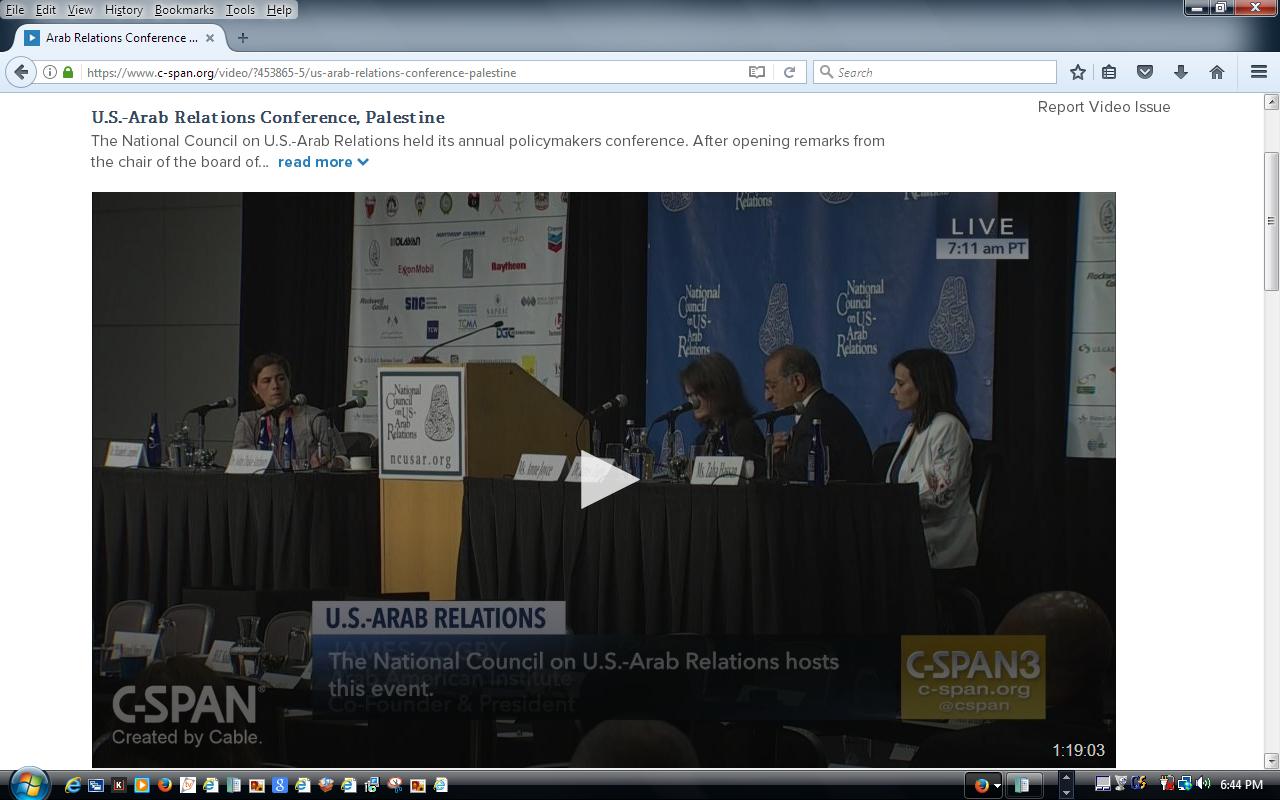 View entire discussion or any part of it.

NCUSAR, the hosting Organization, characterizes itself as an “American non-profit, educational NGO dedicated to improving American understanding of the Arab countries, the Mideast, and the Islamic world.” NCUSAR’s founder John Duke Anthony is an adjunct professor at the Georgetown Center for Contemporary Arab Studies (CCAS) since 2006. CCAS is receives its  funding from the United Arab Emirates  among others.

UNRWA, created in 1949, is the only U.N. agency devoted to serving a single refugee group. The only other U.N. refugee agency is the High Commissioner for Refugees (UNHCR) which serves all the rest of the world’s refugees.  It is also responsible for anti-Israel hostility: UNRWA employees have praised anti-Jewish violence; UNRWA schools have been used by Palestinian terrorists to store and launch rockets upon Israel; UNRWA textbooks for Palestinians demonize Israel and Jews.

In September 2018, the United States ended its funding for UNRWA, which the State Department described as “irredeemably flawed.”   Elizabeth Campbell urged a restoration of U.S. financial aid to UNRWA, claiming the accusations against the agency were unwarranted and touting its work as indispensable.

Anne Joyce’s Middle East Policy Council, funded in part by members of the Saudi royal family, has propagated anti-Israel materials.  The Council’s board of directors has included executives from companies with huge financial stakes in Saudi Arabia.

• “The [1948] Palestinian Nakba [catastrophe] saw the expulsion [by Israel] of three-quarters of the indigenous Arab population of Palestine.”

A key element of the Palestinian narrative is the claim that as a result of the war in 1948, Arab refugees were forcibly expelled from their towns by Israeli forces. But this is incorrect. Most of the Arabs who exited Israel were not expelled by the Israelis. As former Israeli Ambassador to the U.N. Dore Gold has  pointed out:

That is why the recent words of Palestinian President Mahmoud Abbas, at the PLO Consultative Council on December 9, 2018, are so significant. Looking back historically, Abbas declared: “Everyone started to speak in our name, in our absence. Therefore we could do nothing. And you recall, if you remember, that in 1948, when the “Nakba,” or catastrophe, took place, we weren’t a party to it. We were taken out, and we were told, after a week we will return you.”

Elsewhere he was even more explicit on this point. Back in March 1976 in the Palestinian publication Falastin El-Thawra that came out in Beirut, he said that the Arab armies forced the Palestinians to emigrate and to leave their homeland.

In other words, Abbas is saying that the Arab states caused the Palestinians to flee with the false promise that they would come back. The truth is that throughout the State of Israel, in places like Haifa, Tiberias, and the villages of the coastal plain, Israeli leaders told the Palestinians to stay. They begged them to stay!

Of course there were cases in which Palestinians left as a by-product of the war. But as Israel historian Benny Morris argued in Ha’aretz on July 29, 2017, Israel had no “expulsion policy” in 1948. Yet the notion that Israel had been born in sin because of its supposed role in the “ethnic cleansing” of the Palestinian Arabs has persisted and fueled the BDS movement on American campuses and in other places, spreading hate against Israel to this very day.

• Hassan’s claim that Israeli leader Ariel Sharon was “the architect of those mass killings [1982 massacre in Lebanon]” is a falsehood, as demonstrated in a libel court case.

Time magazine smeared Israel in October 1982 when it claimed, without evidence, that  then-Israeli Defense Minister Ariel Sharon encouraged the massacre of 460 Palestinians and Lebanese by Christian Phalangists (troops) in the Sabra and Shatila refugee camps in Beirut, Lebanon in June 1982. he slaughter was revenge for the murder of Lebanese President-elect Bashir Gemayel, a Christian Arab. At the time, Israeli troops were stationed in Lebanon.   In 1984, Sharon filed a $50 million libel suit against Time magazine in a New York court. A six-member jury found Time’s report to be false and to have defamed Sharon. However, the jury ruled the magazine had not acted with malice, which one must prove in order to win a libel suit in American courts. So while Sharon had proved his innocence, he lost the libel suit on technical grounds. The Chicago Tribune, commenting in 1987 on the trial, wrote:

Sharon believed [that] unfair attacks [on him by Time] … stretched back to the 1950s.  [But] justice nonetheless hinged on the gutsy federal judge, Abraham D. Sofaer, who convinced the Israeli government to produce the documents that proved Time was wrong. Sofaer took it upon himself to conduct the much crucial cross-examination, including that of David Halevy, Time`s Jerusalem correspondent who had filed the Sharon story … Halevy finally admitted on the stand that he had no source. He had instead determined the “truth.”

Hassan’s claims on other related matters are similarly problematic.

James Zogby expresses his own partisan views, casting all the blame for the conflict on Israel. For example, he says:

• “There is no two-state solution that is possible. It is not going to happen. I think we need to accept this and deal with the consequences…I am of the opinion that meeting with [Israel’s Prime Minister] Netanyahu accomplishes very little. This is not a leader who wants to compromise.”

Despite all evidence to the contrary, Zogby blames the Israeli leadership for the presumed death of the two-state solution. But, in fact it is Palestinian leaders who rejected the two-state solution — in 2000, 2001 and 2008 at Camp David, Taba and after the Annapolis conference, respectively. The same leadership also  spurned a resumption of talks with Israel as outlined by U.S. Secretary of State John Kerry in his 2014 “framework.”

At the same time, Abbas refuses to compromise on anything, including the basic recognition of a Jewish state and he insists on the so-called “right of return” of millions of Arabs (the vast majority of whom have never lived in Israel) which would result in overwhelming Israel with this new population, effectively destroying it as a Jewish state. Again and again, the Palestinian leadership, despite U.S. pressure on them to come to the table, has insisted that it will not participate in direct talks until Israel meets its preconditions.

Netanyahu has repeatedly publicly asked for negotiations to take place, including: “I turn to you, our Palestinian neighbors, led by the Palestinian Authority, and I say: Let’s begin negotiations immediately without preconditions” (Benjamin Netanyahu, June 14, 2009). In a series of interviews in July 2010, Netanyahu urged Abbas to show “courage” by joining direct negotiations without pre-conditions.

The CAMERA report, Why Israel Insists on Palestinian Recognition of a Jewish State, shows why it’s important that the Palestinians recognize Israel as a Jewish state.

Zogby’s assertions on  other related matters are similarly problematic.

John Duke Anthony, accorded the status of elder statesman here, provided the concluding statement of the session, a four-minute legalistic diatribe here claiming the United States is violating both international law and the U.S. Constitution in failing to recognize “the inadmissibility of the [Israel’s] acquisition of territory by force” while supporting Israel.

Anthony’s accusation is false. His vilification of the United States and Israel ignores the fact that Israel took control of the territory of the West Bank as a result of successful self-defense in the 1967 Six-Day War. The West Bank is not sovereign territory of any country, but rather land disputed by both Israel and the Palestinian Authority. It was illegally occupied by Jordan from 1948 until 1967, when Israel took control.

Former State Department legal adviser Stephen Schwebel, who later headed the International Court of Justice in The Hague, wrote in 1970 regarding Israel’s case: “Where the prior holder of territory had seized that territory unlawfully, the state which subsequently takes that territory in the lawful exercise of self-defense has, against that prior holder, better title.” Prof. Eugene Rostow, former U.S. undersecretary of state for political affairs, wrote in 1991: “The Jewish right of settlement in the area is equivalent in every way to the right of the local [Arab] population to live there.”

Israel’s claims to sovereignty in the West Bank are not based on the results of the war, but on the rights of Jews under international law. The League of Nations’ Palestine Mandate, Article 6, calls for “close Jewish settlement” on the land west of the Jordan River. Article 6 is incorporated by Article 80 of the U.N. Charter, sometimes referred to as “the Palestine article.” The United States endorsed the mandate, including Article 6, in the 1924 Anglo-American Convention.

Distorting history while couching it in clever rhetoric, the participants provided false talking points for those ill-disposed toward the Jewish state. Anti-Israel propaganda events, such as this one, are routinely broadcast as legitimate news events by C-SPAN without qualification. C-SPAN does not provide any background or context to these aired events. Nor does the network bother to issue any disclaimer such as: “Points of view expressed in this program are not necessarily those of this network.” This  irresponsible journalism continues to be overlooked by its patrons – the cable/satellite TV provider industry – and the U.S. Congress which grants special access privileges to the network. Unfortunately, barring a huge public outcry, there’s no reason to expect any change.