CAMERA’s Israel office yesterday prompted correction of a Reuters article which had overstated the percentage of Gaza Strip residents who are 1948 refugees or their descendants. The March 8 article (“Israeli troops kill Palestinian during Gaza protests: health ministry“) had erred: “Gaza is home to 2 million Palestinians, nearly all of them descendants of refugees dating back to the 1948 Middle East war.”

According to UNRWA figures, less than 73 percent of Gazans are refugees (of which just tens of thousands of refugees from 1948, and the rest are descendants). UNRWA reports: “The Gaza Strip is home to a population of approximately 1.9 million people, including some 1.4 million Palestinian refugees.” (UNRWA’s precise figure is 1,386,455 refugees).
A May 2018 Reuters article reported that two-thirds of Gaza’s residents are refugees (a tiny percentage fled or were expelled in 1948, and the rest are descendants.)
AP has likewise accurately reported that “two-thirds of Gaza’s 2 million residents are descendants of refugees” (July 24, 2018).
In response to communication from CAMERA’s Israel office, Reuters corrected the article which now accurately reports:

Gaza is home to 2 million Palestinians, around 70 percent of whom are refugees from the 1948 Middle East war or their descendants, according to UNWRA.

In addition, editors commendably posted the following correction prominently at the top of the article: 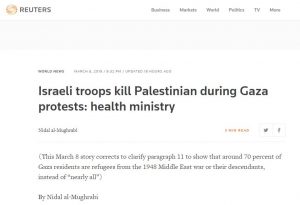 (This March 8 story corrects to clarify paragraph 11 to show that around 70 percent of Gaza residents are refugees from the 1948 Middle East war or their descendants, instead of “nearly all”)