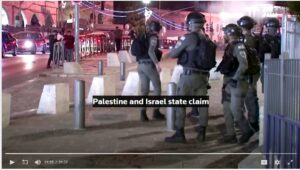 Screenshot of the video with captions prior to yesterday’s correction

References to modern “Palestine” in the West Bank and Gaza are inaccurate and are not consistent with Reuters’ own style. Correct nomenclature for the Palestinian government is “Palestinian Authority,” and the territories they control are accurately referred to as “Palestinian territories,” or West Bank and the Gaza Strip, to designate the geographic area. In the case of the Reuters video, appropriate wording is: “Palestinians and Israel state claim . . . ”
Reuters has commendably corrected the identical error in the past, both in English and Arabic.
In addition to erroneously using the term Palestine, yesterday’s video misidentified Arab Knesset member Ahmed Timi as Amar Tibi.
In response to communication from CAMERA, Reuters deleted the sentence in question along with the erroneous reference to Amar. The corrected clip is also available on YouTube.
Donate Now