Both Reuters and The Los Angeles Times yesterday departed from their usual formulation about Palestinian refugees from 1948 which accurately acknowledges that hundreds of thousands fled or were driven out, and instead reported only that hundreds of thousands were driven from their homes. Yesterday’s misleading reports ignored the majority of 1948 refugees who fled of their own accord, often at the behest of their own leaders. While Reuters has since updated its story with the more accurate phrase noting those who fled, The Los Angeles Times has yet to address its inaccurate report.

Thus, in yesterday’s print edition, The Los Angeles Times’ Alexandra Zavis referred to “the Nakba, or catastrophe, when hundreds of thousands of [the Palestinians’] forebears were driven from their homes during the 1948 war over Israel’s founding” (“In Gaza Strip protests, anger has many target; March on border with Israel is to peak this week,” page 1).

(On a separate issue, it is remarkable that in this article Zavis deals extensively with Palestinians who have “nothing to lose” thanks to “Israel’s decade-long blockage,” high unemployment, fishing restrictions and more, but has completely ignored reports that Hamas, the Gazans’ own government, has instructed Palestinians to vandalize the conveyor belt which carries commercial and humanitarian goods into the Gaza Strip into Israel and to destroy the gas pipeline, resulting in a closure of the crossing and leaving a reserve of cooking gas enough for less than one day. Moreover, Hamas has reportedly prohibited fishermen from fishing at all starting yesterday. Zavis’ complete omission of Hamas’ total fishing ban is particularly striking, given that the article devotes six paragraphs to Israeli restrictions allowing for a fishing zone of six to nine nautical miles.)

CAMERA yesterday contacted Times editors to request a clarification, making clear that of the hundreds of thousands of Palestinians displaced in 1948, most fled and were not driven out. As of this writing, one has not yet appeared. 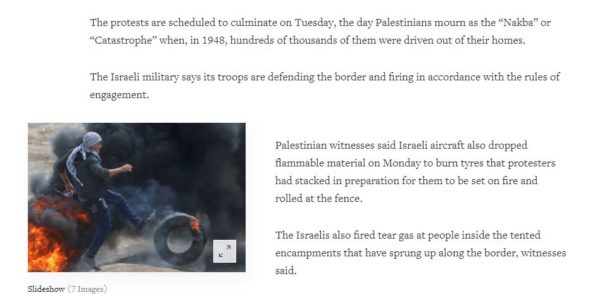