Reuters, a British news wire service providing financial information, news, and photographic images to major newspapers, magazines, and websites around the world, has frequently presented a biased picture of the Arab-Israeli conflict. Reuters claims to be the world’s largest international news and television agency with over 2,000 journalists, photographers and videographers in 151 countries, reporting daily in 24 languages to print media and reaching almost 20% of Internet users on over 900 websites. According to their website, Reuters is “the world’s leading provider of news photography for today’s global media universe” with a “long-standing commitment to provide comprehensive and impartial coverage.”

Unfortunately, Reuters’ commitment to impartial coverage does not seem to extend to the Middle East. Here, the news service displays a pattern of misrepresentations and double standards in many of the photos it distributes. Reuters’ focus tends heavily toward images of Palestinians as victims, with few, if any, pictures of Israeli victims. Reuters news photos, posted shortly after transmission on the http://news.excite.com/photo website, were examined following two recent Palestinian terrorist bombings victimizing Israelis. They reveal a striking lack of balance:

1. On Thursday, March 1, 2001, a Palestinian terrorist detonated a bomb aboard a taxi-van near Moshav Mei Ami in northern Israel, killing one Israeli man and wounding nine others, including the terrorist. The first Reuters caption that mentioned the terrorist bombing appeared under an irrelevant photo of a Palestinian woman walking by a graffiti-covered wall at the Deir El Balah refugee camp in Gaza Strip. This was the seventh photo that had appeared that day of Palestinians. Five photos depicted Palestinians as victims, with such captions as: “A Palestinian woman weeps as she views her damaged home”; “Palestinian youths duck for cover as Israeli soldiers open fire”; “Palestinian students take cover as Israeli soldiers open fire on them”; “Palestinians wait on main road in Gaza after Israelis stop traffic.”

Only four photographs appeared on the Mei Ami bombing in Israel. In contrast to the specific identification of Palestinians as victims, the captions on these photos did not identify the terrorist victims as Israelis. They read: “Bodies of injured men lie on the road after a car bomb exploded in the northern Israeli town of Mei Ami”; “Woman is loaded into ambulance after car bomb explodes in northern Israel”; “Injured woman awaits medical attention after car bomb blast in Umm Al-Fahm”; “An injured man is carried away after car bomb blast in northern Israel.” According to Reuters’ captions, even the dead victim remained anonymous: “One person was killed and nine people were wounded…” Of the captions referring to the bombing, the first few referred only to a car bomb blast with no mention of a perpetrator. The last two captions mentioned “a suspected Palestinian guerilla.”

Not all wire services purvey such biased images. AP photographs from March 1st on the same website included six of the bombing and four of Palestinians. The Palestinians in the photographs were not portrayed as victims, and the captions referred to Israel being on high alert for bombings. The captions under photos of the bombings did identify the victim as an Israeli, although the terrorist here too was labeled “a suspected Palestinian militant.”

On the following two days after the Mei Ami bombing attack, Reuters distributed 10 pictures of Palestinian funerals and mourning. There were no photos of Israelis mourning.

2. On March 4, 2001, a terror bombing in central Netanya killed a Hamas suicide bomber and three Israeli Jews. At least 60 others were wounded, some seriously. Twelve AP photographs of the bombing appeared on the now-defunct http://news.excite.com/photo website, which displayed news photographs as they were distributed by various wire services. These included several photos of the Orthodox burial society searching for remnants of the victims and several of wounded, traumatized, or covered dead victims of the terrorist bombing. The victims were clearly identified as Israelis.

Reuters photos of that day told a completely different story. At the time, the website carried no photos of Israeli victims, although later, a simple photo showing an injured woman on a stretcher was added to the Reuters photo archive. The caption underneath that picture wrongly described the number of bombing victims, claiming 2 killed and 45 injured. Again, the victims were not identified as Israelis. The other Reuters photographs of the bombing included two photographs showing Israeli police removing the body of the Palestinian suicide bomber, one photograph of a hospitalized Palestinian beaten by some Israelis after the bombing, and another that was captioned “Israelis chant ‘death to Arabs’ after the bomb attack.” The message conveyed, even in the wake of a murderous attack on Israeli civilians, was that Palestinians were the victims.

The next day, Reuters provided no photographs of funerals for the Israeli victims, while AP and other wire services carried several. Reuters, instead, distributed five photographs of Palestinian funerals and grave side mourning.

The captions, as well as the pictures, play a crucial role in shaping public perception of events in the Middle East. Reuters’ misleading captions present a troubling problem, compounded by a consistent refusal to acknowledge and correct its mistakes.

1. On February 8, 2001, a powerful remote-controlled car bomb went off in the crowded Orthodox Beit Yisrael area of Jerusalem. No one was killed, which was considered miraculous by the residents of the area, especially due to the circumstances – a truck carrying gas canisters had just passed by the booby-trapped car, and the usually crowded vegetable store right next to the car was closed for afternoon prayers when the bomb exploded. Soon after the news got out, thousands of nearby yeshiva students and Orthodox residents gathered in the street to celebrate the miracle with song and dance. The Jerusalem Post International Edition on February 23, 2001 carried a Reuters photo of the celebration with the following caption:

Moments after the car bombing in Jerusalem’s Beit Yisrael neighborhood earlier this month, yeshiva students waved a piece of the car’s wreckage and celebrated that attack’s failure to kill anyone. Four people were lightly injured in the explosion.

The same photo appeared on February 9, 2001, the day following the bombing, in the New York Times, carrying the Reuters caption:

A crowd of Israelis chanting anti-Arab slogans in Jerusalem yesterday as one held a jagged piece of metal from the explosion of a car bomb.

Ha’aretz had reported that some supporters of the Kach movement did chant anti-Arab slogans, but they were shoved back by police and confronted by yeshiva students. The Reuters photo shows, by contrast, the smiling faces of yeshiva students and Hasidim who appear to be celebrating.

Since there were thousands celebrating, but only a small group shouting anti-Arab slogans, isn’t it more probable that the smiling, happy people in the pic
ture are the ones celebrating? And if it cannot be ascertained which group they were part of, the caption should have, at least, mentioned both groups.

Aside from the question of accuracy, there is the larger question of misrepresentation. The photo (and its caption) of the street scene that followed the bombing was supposed to represent that scene. Even if the photo did capture the relatively small group shouting anti-Arab slogans (which is improbable), the photo and caption were a misrepresentation of an event where the vast majority (thousands) were celebrating and praising G-d for what they considered to be a great miracle.

When confronted about the apparently erroneous caption, the New York Times consulted with the Jerusalem bureau of Reuters, which stood by its photo caption. Reuters admitted that there was a crowd of people celebrating the lack of deaths, but insisted that the people in the picture were chanting anti-Arab slogans, and therefore no correction was warranted.

2. On February 16, 2001, Reuters distributed a photograph by Suhaib Salem showing a Palestinian woman tossing dozens of bullet shells in the air. The caption read: 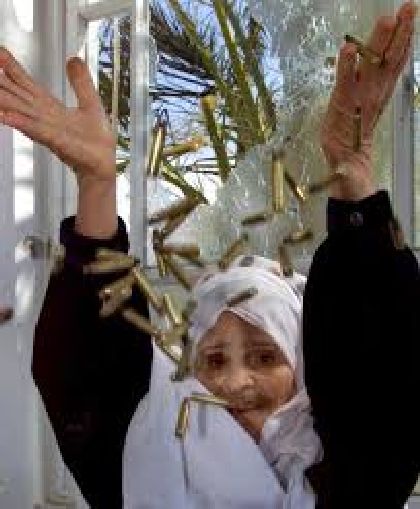 A Palestinian woman displays empty Israeli bullet shells inside her house in the Rafah refugee camp between Egypt and the southern Gaza Strip, February 16, 2001. Five Palestinian families said this week that they are homeless after Israeli army forces demolished their houses in Rafah in southern Gaza.

Reuters here suggested that the Palestinian woman was displaying evidence of Israel’s attempt to destroy her home. Of course, the caption is contradictory – bullet shell casings are ejected from the weapon of the shooter, they are generally not found near the target of the shooter. The fact that the Palestinian woman was displaying numerous bullet shell casings inside her house would suggest that her home was being used as a shooting base, most likely by Palestinian gunmen shooting at Israeli targets.

When challenged on this matter, however, Reuters again declared that it was “standing by the caption”. When pressed about the meaning of “Israeli” bullet shells inside a home in a Palestinian refugee camp, Reuters Global Editor-in-Chief Stephen Jukes speculated that Israeli soldiers had entered the home of this Palestinian woman and had used it as a shooting base. He did not explain why an Israeli soldier would risk his life by entering a hostile refugee camp rather than shoot from behind a fortified position, or how Israeli soldiers managed to penetrate into the heart of Area A – Palestinian controlled territory – with nary a mention from the world press, UN, and Arab countries. The IDF spokesman denied that soldiers entered a house in the Palestinian refugee camp, dismissing Reuters’ explanation as preposterous. Reuters, however, refuses to correct the error.