In 2017, Reuters published an important interview in which senior Hamas official Mahmoud al-Zahar clarified that the terror organization’s newly released policy document did not in any way represent a retreat from Hamas’ commitment to the destruction of Israel. As Reuters’ headline succinctly put it: “Leading Hamas official says no softened stance towards Israel.” 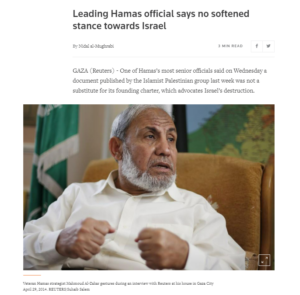 This week, Reuters cites that very same policy document to justify its untenable Aug. 6 claim that “Whereas Hamas leaders have made statements softening their commitment to the destruction of Israel, the smaller PIJ [Palestinian Islamic Jihad] has made no such move and rejects any compromises with Israel” (“Explainer: Palestinian Islamic Jihad, the group targeted by Israel in Gaza“).

To understand exactly how much Reuters has softened its coverage of Hamas, and how little Hamas has softened its commitment to the destruction of Israel, we’ll go back to 2017. Reuters’ own 2017 interview with al-Zahar is an excellent starting point. At the time, Reuters reported:

One of Hamas’s most senior officials said on Wednesday a document published by the Islamist Palestinian group last week was not a substitute for its founding charter, which advocates Israel’s destruction.
Speaking in Gaza City, Mahmoud al-Zahar, a regular critic of Israel, said the political policy document announced in Qatar on May 1 by Hamas’s outgoing chief Khaled Meshaal did not contradict its founding covenant, published in 1988.
Trailed for weeks by Hamas officials, the document appeared to be an attempt to soften the group’s language towards Israel. But it still called for “the liberation of all of historical Palestine”, said armed resistance was a means to achieve that goal, and did not recognise Israel’s right to exist.
“The pledge Hamas made before God was to liberate all of Palestine,” Zahar said on Wednesday. “The charter is the core of (Hamas’s) position and the mechanism of this position is the document.” . . .

In its new document, Hamas said itagrees to a transitional Palestinian state within frontiers pre-dating the 1967 Middle East war but continues to oppose recognising Israel’s right to exist and backs an armed struggle. (Emphases added.)

By agreeing to a transitional Palestinian state within 1967 lines, Hamas’ 2017 policy document (which was unveiled by then Hamas leader Khaled Meshaal) affirms the Palestine Liberation Organization’s 1974 stages plan, which stipulates taking whatever territory possible and using it as a means to gain the rest. As described in The Journal of Palestine Studies (“Political Program for the Present Stage Drawn up by the 12th PNC, Cairo, June 9, 1974”):

This [phased] strategy, dating from June 1974, has served as the PLO’s guiding principle ever since. It stipulates that the Palestinians should seize whatever territory Israel is prepared or compelled to cede to them and use it as a springboard for further territorial gains until achieving the “complete liberation of Palestine”.

Indeed, the 2017 policy affirms:  “Hamas rejects any alternative to the full and complete liberation of Palestine, from the river to the sea.”

The document, which may be viewed in its entirety here, includes the following:

Palestine, which extends from the River Jordan in the east of the Mediterranean in the west, and from Ras Al-Naqurah in the north to Umm Al-Rashrash in the south, is an integral territorial unit. It is the land and the home of the Palestinian people.

Rejecting Israel’s presence in any borders, the document continues:

The establishment of “Israel” is entirely illegal and contravenes the inalienable rights of the Palestinian people and goes against their will and the will of the Ummah; it is also in violation of human rights that are guaranteed by international conventions, foremost among them is the right to self-determination.

19. There shall be no recognition of the legitimacy of the Zionist entity.

In communication with CAMERA, Reuters justified its report last week about Hamas’ alleged softening on its commitment by pointing to “Hamas’ 2017 statement when former Hamas leader Khaled Meshaal said Hamas recognized the 1967 borders of Palestine even if it did not recognize the state of Israel.” Given that the 2017 policy statement in questions “rejects any alternative to the full and complete liberation of Palestine, from the river the sea,” how can Reuters possibly cite this document as the basis for claiming that Hamas has softened its commitment on the destruction of Israel?
Indeed, Reuters rightly reported in 2017 that the policy document was a Hamas attempt to soften its “language towards Israel,” which is very different from Reuters’ 2022 claim that Hamas has softened its commitment to Israel’s destruction and is now open for compromises. (Hamas’ pragmatic need to govern its people, and therefore develop understandings with Israel via third parties like Egypt, should not be confused with any acceptance of territorial comprises with the Jewish state.)
Deutsche Welle has previously corrected after similarly misreporting the 2017 policy document. The German media outlet’s amended text accurately reports:

Hamas had said in a 2017 paper that it could foresee a national discussion about a Palestinian state based on the borders that were in place before the Six-Day War in 1967. But the very same paper also said there was no alternative to a fully sovereign state spanning the entirety of Palestinian territory, with Jerusalem as the capital. The latter would practically rule out coexistence with Israel.

In short, contrary to Reuters’ reporting, Hamas shares Islamic Jihad’s total commitment to the destruction of Israel and complete rejection of compromise. Reuters’ false claim that Hamas has softened its commitment to these essential principles reflects a softening of the news agency’s commitment to its own Trust Principles.