On December 8, a Palestinian stabbed a Jewish mother in the back with a foot-long knife while she was walking her children to school. Instead of producing a straightforward report about the attack, Reuters instead used the headline to apparently justify the stabbing: 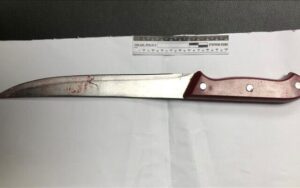 The knife used in the December 8, 2021 stabbing attack on a Jewish mother in Jerusalem.

Instead of centering the actual story – a stabbing attack – the headline centers the attacker, framing her as a victim for facing “eviction” and being “held.” No evidence is provided that the property dispute actually motivated the attack. The article’s lede about “long-running tensions in the neighborhood” similarly turns the story into the justification of a violent attack by a Palestinian teen girl on a Jewish mother in front of her young children.

While the ongoing property dispute in the Shimon HaTzadik / Sheikh Jarrah neighborhood may be relevant context for readers, the story manages to get that context wrong, anyway. In explaining the property dispute, the article tells readers only:

The Palestinian families who could lose their homes in Sheikh Jarrah have lived there for decades. Settlers claim the land as theirs and have presented 19th-century documents as evidence.

The Jewish owners’ claims are not simply based on “19th century documents.” They are the successors of the Jewish owners who were driven out during the 1948-49 war, and Jewish ownership was acknowledged by the Jordanian Custodian of Enemy Property and the UN. The Palestinian squatters have been offered protected tenant status (i.e., they will not be evicted) if they finally start paying rent.

CAMERA has written to Reuters requesting corrections and clarifications, and urges prompt action to fix the headline and the story.