A May 6 Reuters article (“Palestinians say they will defy Israeli order in prisoner payments dispute“) whitewashes suicide bombers and other Palestinian terrorists who died as they carried out deadly attacks against Israel as “those killed in unrest.” Covering up the fact that the the Palestinian Authority pays massive amounts of funds to the families of terrorists, Rami Ayyub and Ali Sawafta began their article:

Palestinian leaders on Friday vowed to defy a new Israeli military order which they fear could lead to the confiscation of money destined for prisoners, their relatives and the families of those killed in unrest.

At no point does the article indicate that the payments benefit the families of suicide bombers and other terrorists killed as they were carrying out deadly terror attacks against Israelis. 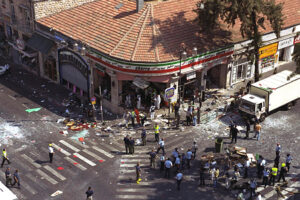 Thus, for instance, among the beneficiaries of the PA payments is family of Izz al-Din Shuheil al-Masri, the suicide bomber who murdered 15 civilians, nearly half of them children, in the Sbarro pizzeria in Jerusalem on Aug. 9, 2001. According to Reuters, al-Masri was “killed in unrest.”
Also among “those killed in unrest” is Abdel-Basset Odeh who walked into the Park Hotel in Netanya on March 27, 2002, and as guests were gathered for their Passover seder, exploded himself, killing 30 people, including elderly Holocaust survivors, and injuring 140.
Also “killed in unrest” is Saeed Hotari who blew himself up outside the Dolphinarium disco in Tel Aviv on June 1, 2001 murdering 21 people, mostly teenagers, and injuring 120.
There’s also Abed Hassouna, “killed in unrest” as he stormed a bat mitzvah celebration in Hadera, spraying his assault rifle throughout the room, killing six and injuring 33.
The list goes on and on, claiming over 1000 Israeli bystanders whose lives were snuffed out first by cold-blooded murderers whom Reuters egregiously claims were “killed in unrest,” their victims and heinous crimes forgotten.
“It’s humiliating that we, victims of these convicted jihadist terrorists, parents of murdered children, have to raise our voices about [these payments], and evidently we are alone in doing so,” wrote Arnold and Frimet Roth in 2011. Their young daughter Malki was murdered in the Sbarro bombing.
Palestinian killed over 1000 Israeli victims in bombing, shooting, and stabbing attacks. Reuters subsequently snuffed out their lives a second time, erasing the memory of the victims’ existence and of their murderers’ heinous crimes, falsely casting their killers as hapless victims “killed in the unrest.”
See also “New York Times Favors Palestinian Narrative on Payments to Terrorists“
Donate Now