On Nov. 1, Sky News Arabia – a joint venture between the UK-based Sky News and Abu Dhabi Media Investment Corporation – published a report about local elections in the Golan Heights that’s riddled with errors and distortions (“Golan residents celebrate the ‘foiling’ of Israeli elections”).

The article focuses on Israeli municipal elections held on Oct. 30 in the four Druze towns in the Golan Heights, and the resulting protests and clashes they sparked. Below is a full translation of the original Arabic article, with the errors and distortions underlined. (Translation by CAMERA Arabic.)

The residents of the occupied Syrian Golan celebrated the foiling of the Israeli municipal elections, that were held in the territory on Tuesday for the first time since its occupation in 1967.

Israeli sources pointed out that participation rate ranged between 0% and 1.5%.

The Golan had seen a general strike, in rejection of the Israeli elections that were forced upon the residents who affirm their commitment to their Syrian identity, according to the official Syrian news agency SANA.

Demonstrations were also launched in the Golan villages on Tuesday, organized by activists who resist Israeli attempts of Judaization.

The Israeli military [sic] used live ammunition and gas grenades to dissemble the sit-in that took place in the town of Majdal Shams, and several protesters were also arrested.

This is the first time the Israel Interior Ministry has decided to hold the elections in the four villages [towns] of the Golan Heights – Buq’atha, ‘Ein Qenya, Mas’adeh and Majdal Shams – however the candidates in Buq’atha and Mas’adeh had withdrawn from the elections due to threats by opponents, which brought about a cancellation of the elections in the two towns.

The six falsehoods in the report are as follows:

Falsehood #1: “Israeli elections were forced upon the residents.” 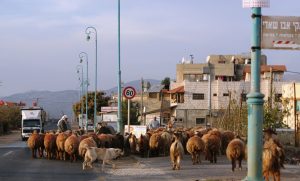 Sky reports without challenge the claim from the Syrian government’s official news service (SANA) that the Israeli government forced elections upon residents of the Druze towns. In fact, the impetus for the elections elections was the effort of group of Druze residents of the Golan who fought in Israeli courts for the change of policy. An article in the Israeli “Walla” website elaborates (CAMERA’s translation):

“During the past eighteen months, six Druze petitions were brought before the supreme court, opposing the way the town council members and heads were appointed [prior to 2018, Israel’s Interior Ministry appointed them], and demanding that open municipal elections be held in their communities as well,” lawyer Fahd Safdi from Mas’adeh tells Walla News. “At the same time we launched letters to the Interior Ministry and applied heavy pressure so it would enable us to exercise our right to vote.”

Falsehood #2: “The voter participation rate ranged from between 0% and 1.5%.”

Falsehood #3: Israel has been engaged in “Judaization” in the Golan.

“Judaization” (Tahweed in Arabic) is a vague term among Arabic speakers than can signify any increase of either the physical, metaphorical or imagined presence of Jews in a given place; it is often used in the context of Jerusalem. This includes but is not limited to: Scholars searching for archeological findings in the Old City and its surroundings, visitors walking peacefully around the Temple Mount compound, or even a Christian individual trying to set the Al-Aqsa mosque on fire.  The question of what “Judaization attempts” the report is alluding to goes unanswered.  In 51 years of Israeli control, the construction of Jewish villages in the Golan Heights has rarely faced Druze opposition of any kind.  Moreover, how a democratic process initiated by Druze, in which both the voters and the candidates are Druze, can be labeled “Judaization” is a mystery.

An Israeli police spokesperson confirmed to CAMERA that there was no use of live ammunition during the incident.  Similarly, AFP (quoted by France24) and Reuters accounts of the incident in Arabic did not claim any such use of “live fire” by Israeli police.

The Israeli police spokesperson confirmed to CAMERA that “no arrests” were made.

Israeli police officers, wearing helmets and carrying teargas launchers, opened a passage for the voters outside Majdal Shams’s polling place. With the protesters continuing to prevent people from entering, the police fired teargas in order to disperse the crowd. No one was hurt or arrested.

Falsehood #6: “The candidates in Buq’atha […] had withdrawn from the election.”

In fact, one candidate in Buq’atha did not withdraw his nomination, and therefore was declared the winner in advance – this official Israeli document confirms this.

Such shoddy journalism again indicates that Sky News Arabia appears more interested in joining its brethren in the Arab media by parroting anti-Israel propaganda than in engaging in well-sourced, professional reporting – a disregard for basic journalistic standards that also casts a shadow on its London-based parent.