The definition of antisemitism that was adopted by the Obama State Department included, “accusing Jews as a people of being responsible for real or imagined wrongdoing … committed by non-Jews.” The misleadingly-named group “Jewish Voice for Peace” (JVP) has done just that with its “Deadly Exchange” Campaign, which puts the blame on an American Jewish organization, the Anti-Defamation League (ADL), and the Jewish State of Israel for American problems between police and communities of color. JVP’s campaign has been called “undeniably [an] anti-Semitic libel designed to paint Jews with blood and hold Jews responsible for state violence.” In Teen Vogue’s latest piece on Israel, the publication has echoed JVP’s libels and distributed them to its audience of adolescents and 20-somethings. (“How Policing in the U.S. and Security in Israel Are Connected,” July 16, 2018.)

As CAMERA has previously documented, since at least December of 2016, Teen Vogue, ostensibly a fashion and beauty magazine, has published a number of biased articles about Israel. This past May, for example, CAMERA members compelled the publication to correct the patently false claim, made by one of its writers, that Israeli soldiers prevented her father from playing soccer at his West Bank home – during the Jordanian occupation of the territory, prior to 1967.

This week’s Teen Vogue column, like the JVP “Deadly Exchange” campaign, takes aim at a training program run by the ADL in which Israeli law enforcement groups help train their American counterparts in counter-terrorism. The purpose of the exchange is for American law enforcement officers “to learn how Israeli police, intelligence and security forces work to prevent terrorist attacks.” Yet JVP, and now Teen Vogue, have turned it into something sinister. 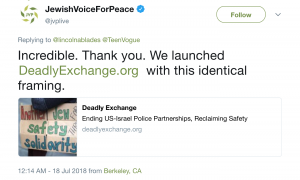 Jewish Voice for Peace even commended the author, Lincoln Anthony Blades, on Twitter, writing, “Incredible. Thank you. We launched DeadlyExchange.org with this identical framing.”

The ADL is a Jewish civil rights organization that has adopted as its mission not only “to stop the defamation of the Jewish people,” but also “to secure justice and fair treatment to all.” As part of its work against bigotry, the ADL was one of the first groups to call out Jewish Voice for Peace for its anti-Israel activism. In 2010, the ADL said that “JVP uses its Jewish identity to shield the anti-Israel movement from allegations of anti-Semitism and provide a greater degree of credibility to the anti-Israel movement.” In return, JVP set out to discredit the century-old civil rights organization with its “Deadly Exchange” campaign.

Blades has adopted Jewish Voice for Peace’s charges that Israel and an American Jewish civil rights organization are to blame for problems between American police and American communities of color. His evidence of the connection, however, is flimsy and based on a selective recitation of facts. For example, he writes,

Along with their relationships around money and weapons, Israel and the U.S. share a history of deploying over-militarized policing practices. In America, that style of policing gained attention during the St. Louis police department’s response to the 2014 Ferguson uprising, which followed the death of Mike Brown. While it was jarring to watch local police officers wearing military equipment and armed with military-grade weapons, accompanying tanks rolling through local streets, and shooting teargas at distraught citizens, it was even more troubling when a Twitter user alleged that the gas canisters shot at Ferguson protesters were the same ones that had been fired at Palestinian protesters just days before, both made in the U.S. 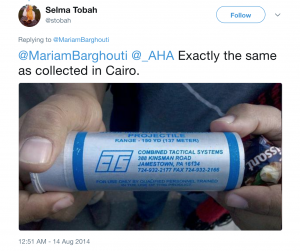 The allegation that the same tear gas was used in both Ferguson and in the West Bank, even if true, tells nothing about the context in which it was used, about the reasons for its use, or about the politics of each region. The fact that another Twitter user claimed the same gas canister was used in Egypt as well seems to have been deemed irrelevant.

Tear gas has also been used on protesters in Kashmir and in Turkey in 2013, and in Bahrain in 2012. Yet, only Israel is singled out.

Three years before the Ferguson protests, Tim Fitch — the chief of the very same St. Louis County Police Department responsible for firing teargas at activists and concerned citizens — had flown to Israel to receive training from Israeli police, intelligence, and military in a weeklong course on terrorism-focused policing.

Fitch retired in January of 2014. Michael Brown was shot in August of that year, and the first Ferguson protests followed. Fitch was not even working at the St. Louis police department at the time the protests occurred. Any connection to Israel therefore, is attenuated at best.

Blades relies heavily on accusations made against the Shin Bet and Israeli police special patrol unit Yasam, as reported in Qatari-funded Al Jazeera and the fringe-left media outlet Intercept. But accusations aren’t findings. Misconduct by police in Israel is investigated and prosecuted. Al Jazeera, too, has been the subject of accusations – accusations that it supports the brutal Houthi rebels fighting in Yemen, and that its Islamabad bureau chief is a member of Al Qaeda. Yet, Blades considers Al Jazeera a reliable source.

In his description of the May riots promoted by their organizers as the “Great Return March,” Blades overlooks the role of terrorist groups. The United States has designated Hamas and other groups promoting these violent attacks along the Gaza border as terrorist organizations since 1997. This is not a recent development. Blades also ignores the attempts to breach the border fence, cross into Israel, and even target Israelis with live fire. Indeed, even the New York Times article that Blades cites reports that “the Israelis said they also exchanged fire with two gunmen across the fence and fired at two others who tried to infiltrate into Israel,” yet Blades ignores this information.

The recent history of police violence enacted on unarmed black and brown citizens by American law enforcement mirrors the recent history of Israel treating Palestinians as violent insurgents. As the U.S. federal government has categorized some black protesters as “extremists”, directs its government agencies to enforce anti-Muslim policies, and empowers its immigration-enforcement agency to rip young kids away from their parents, the Israeli government seems to be conflating all Palestinian demonstrators with Islamic extremists, undertaking an effort to deport African migrants living in Israel and detaining thousands of Palestinian children (using U.S. tax dollars).

Blades seems unacquainted with the history of Hamas, which governs Gaza and which is very much a violent group. While Israel takes great pains to separate Palestinian civilians from Hamas members, there is no denying the group’s violence. Not only does its charter call for Islam to “abolish” the state of Israel, but it seized control of Gaza in 2007 in a violent coup that included killing members of rival party Fatah, burning a police station, and bombing Fatah headquarters. Over the past two months, the group has destroyed over 7,000 acres of land using incendiary devices launched into Israel by kites and balloons. Earlier this week a flaming balloon from Gaza landed in an Israeli preschool where toddlers were playing.

Both Hamas and the Palestinian Authority, moreover, incite children to violence, which is the reason that some Palestinian minors unfortunately must be detained. As to the African migrants, Israel has been searching for a humane solution for people who crossed its border illegally for some time, as Blades’s own source explains. While a plan had been proposed to offer cash assistance to those leaving, the plan was never put into effect.

Blades also cites Israel’s adoption of former New York city “stop and frisk” laws as further evidence of this allegedly shady alliance. The law was adopted as a temporary measure in February 2016 to help combat the knife attacks that were a near-daily occurrence in Israel at the time. It is no longer in force.

Blades calls his column, “Do Better,” and describes it as one that “that debunks fallacies regarding the politics of race, culture, and society — because if we all knew better, we’d do better.” Yet, fallacies originated by a fringe group of anti-Israel activists are exactly what he promotes.

There are other problems with this piece as well. He introduces it by discussing the U.S.’s recent withdrawal from the UN Human Rights Council due to what Blades calls “the council’s alleged anti-Israel bias.” Of course, the Obama administration also called the UNHRC biased, as has Britain, due to the fact that Israel is the only country for which the Council has a permanent item on its agenda.

Blades continues, “The U.S. and Israel’s mutual solidarity comes as both nations face accusations of committing human rights violations: … the latter for its violent treatment of Palestinian protesters, many of whom were said to be unarmed.” His source for this is a biased and inaccurate analysis piece by Ishaan Tharoor that CAMERA addressed in April. As we wrote then, “Tharoor fails to mention … that Hamas itself has acknowledged that at least five of these individuals [killed] were Hamas terrorists. The Israeli Defense Forces identified another five as also belonging to a terror group. Pictures of these men in Hamas garb were widely distributed.”

Blades also repeats the common myth that Israel is the largest recipient of U.S. aid. In fact, when in-kind military support in the form of U.S. troops stationed abroad is included, it’s Japan, not Israel, that is the biggest beneficiary of U.S. aid. Unlike Japan, South Korea, Germany, and Kuwait, to name just a few of the places in which U.S. troops are on the ground, “no US military personnel are put at risk to ensure Israel’s safety.” Moreover, the U.S. benefits enormously from military cooperation with Israel, for example, the Iron Dome technology that was shared.

Of course, if Blades is getting his background information from Teen Vogue’s prior reporting on the subject, it’s no wonder he is so misinformed. Teen Vogue is still promoting its February 2017 article, “The Israeli-Palestinian Conflict: What You Need to Know,” which CAMERA debunked last year.