Does the New York Times think any violent attack on any Jew living anywhere in the Holy Land at any time in history counts as “resistance”?

A story in today’s print edition about a kibbutz in the north of Israel describes deadly attacks on Jewish civilians—farmers and Holocaust survivors living in British-ruled Palestine—with that noble-sounding word:

The hardy farmers who founded Nir David, then named Tel Amal, in 1936 were joined by a group of Holocaust survivors in the 1940s. Together, they worked the land, drained the surrounding malarial swamps and fought off local Arab resistance. Soon the kibbutz expanded from one bank of the Asi to the other. 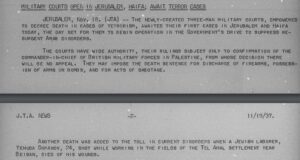 A November 1937 JTA dispatch describes the killing of a 24-year-old Jew shot “while working in the fields” of Tel Amal.

The editors responsible for the piece and the author, Isabel Kershner, surely understand what the word “resistance” evokes. Just a day before this story appeared online, a New York Times book review used the word to describe the “heroic feats” of Jewish women who fought the Nazis. Another story used it to describe captured African slaves who made “the choice to die rather than submit” to their slavers. And a third piece that day used it as the proper noun describing fighters against fascism and Nazism in Italy. A piece online today refers to “resistance fighters” who confront Myanmar’s military junta that took power in a coup earlier this year.

Amidst all these descriptions of resistance fighters for worthy causes, the New York Times also applied the word in a way that casts Holocaust survivors tending their fields in the role of Nazis, slavers, and military dictators. 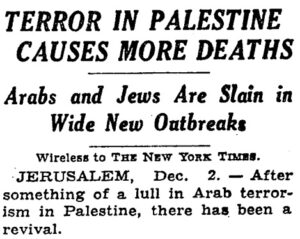 How might the paper have referred to attacks on the kibbutz, if not as “resistance”?  Many describe armed assaults on a civilian community as “terrorism.” It was certainly an “attack.” And indeed, those are the words the same newspaper used in its contemporaneous reporting on such incidents. “Terror in Palestine Causes More Deaths,” read the headline to a December 1938 New York Times piece that spoke of a revival “in Arab terrorism in Palestine” and reported the ambush and killing of three Jewish supernumeraries. An April 1938 Times piece detailing “an attack…by armed Arabs on Tel Amal” explained that “four armed Arabs tried to penetrate the settlement while thirty others began firing from near-by hills.” The attackers were described as “brigands.” These were among of several deadly attacks on the kibbutz.

When we do hear attacks against innocent Jews described as “resistance,” it normally doesn’t come from news reporters that promise objectivity, but rather in the laudatory self-descriptions of antisemitic terror groups like Hamas, whose leader recently spoke of the “resistance” targeting Israeli cities with indiscriminate rocket fire, and which has dubbed its suicide bombings against crowded buses as legitimate “resistance.”

This isn’t the first time the New York Times sterilized anti-Jewish actors. The newspaper, for example, once scrubbed the word “terror” from a story about the killing of the leader of a terrorist group. Last year, Kershner and another Times reporter described a notorious partnership between Nazi Germany and Amin al Husseini, a virulently antisemitic Palestinian leader that shared Nazi goals, merely as a collaboration targeting “Zionism” as opposed to Jews. And several years ago, a Times reporter referred to a balisong (or butterfly knife) waved by a Palestinian attacker as a “boy scout” knife.

Thread: A list of @nytimes euphemisms relating to anti-Jewish violence: