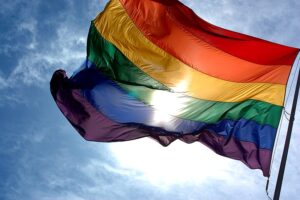 In fact, gay fathers and mothers are eligible for paternity leave in Israel. According to the Association of Israeli Gay Fathers (CAMERA’s translation from the Hebrew):

One of the fathers, whether it is the biological or non-biological father, according to their choice, is entitled to paternity leave up to 26 weeks.
In the case of a single birth, 14 of the weeks are paid leave. In the case of twins, 17 weeks are paid. (In the event that the employee going on leave has worked at his current workplace for less than one year, he will be entitled to the paid weeks only, and will not have the option to continue without pay for up to 26 weeks.)

According to the Kol Zchut (“All Your Rights”) site, supported by the Ministries of Justice and Social Equality, and the Joint Distribution Committee, birth leave for same-sex couples is as follows:

In response to communication from CAMERA’s Israel office, Thomson Reuters promptly corrected, removing the incorrect claim from the story. In addition, editors commendably appended the following note alerting readers to the change:

The Thomson Reuters article was about a study by the University of California, Los Angeles (UCLA) which found that a minority of 33 countries of the Organisation for Economic Co-operation and Development (OECD) grant gay fathers the same amount of leave as heterosexual new parents. Reuters reported:

First published in the Journal of Social Policy, the research found that gay male couples received the same number of weeks off as different-sex couples in just 12% of those nations.

Israel, therefore, stands among a distinct minority in granting equal parental leave for gay fathers. It is unclear whether the error originated in the study itself.

CAMERA has located the full text of the UCLA study, and has found that it is the source of the error. The authors erred (page 9):

Th authors, with lead researcher Elizabeth Wong, apparently are conflating same-sex couples who have full custody of the child – they receive the full leave – versus gay fathers whose child is in the biological mother's custody. In the latter case, the same-sex couple does not have responsibility for caring for the child, and therefore they do not receive leave. The identical policy exists in Australia, which the authors hold up as the gold standard. In Australia, too, a  requirement for receiving leave is that the parent "have or will have responsibility for the care of a child."