Times of Israel last week commendably clarified multiple reports which had stated as fact that residents of the the small Palestinian hamlet of Khan Al-Ahmar east of Jerusalem have lived there since the 1950s. In fact, aerial photographs reveal that the site was desolate in those times, with settlement beginning in the 1980s and growing in earnest within the last 15 years.

The Jan. 26 article, “Israel to destroy Khan Al-Ahmar hamlet, rebuild it 300 meters away,” many previous ToI stories (for example, see here, here and here), had erroneously report that Khan Al-Ahmar was settled in the 1950s. The articles state that the villagers “have lived at the site, then controlled by Jordan, since the 1950s, after the state evicted them from their Negev homes.” 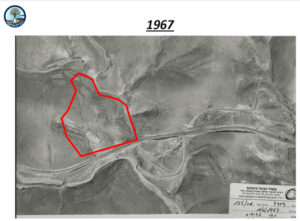 Regavim’s aerial photographs of the site over several decades reveal this was not the case. Indeed, a photograph of the site in 1967 shows that Khan Al Ahmar was virtually empty. It appears that there were approximately four or five buildings there in 1980. By 1999, there were approximately up to two dozen structures at the site. The aerial images reveal that the encampment grew significantly between 2006 and 2012. (All images are available in the previous hyperlink.)
While residents now claim residency since the 1950s, the photographic evidence does not support this claim.
In response to communication from CAMERA’s Israel office, Times of Israel commendably amended last week’s report along with the earlier articles. The updated text on the Jan. 26 article includes the following details:

Khan al-Ahmar’s Palestinian residents, members of the Jahalin tribe, say they arrived in the area in the 1950s after being displaced during the 1948 war. They recount practicing a nomadic lifestyle for years before putting down a permanent settlement.

The hamlet’s first structures appear in aerial photographs in the late 1970s. By the end of the 1980s, the tiny community’s presence in the area was recorded in contemporaneous academic accounts.

The camp slowly grew until the 1990s, when it seemed to expand much more rapidly. The community today remains small, numbering less than 200 residents.

Right-wing Israeli groups say that the aerial photos are proof that the village was only recently built, weakening their claim to the land. They further claim that the Palestinian Authority deliberately sent the residents there to take over strategic West Bank land.

The villagers argue that they had little alternative but to build without Israeli construction permits, as such permits are almost never issued to Palestinians for building in parts of the West Bank, such as Khan Al-Ahmar, where Israel has full control over civilian affairs.

Once the village is demolished, residents are slated to be transferred several miles east, near the Palestinian town of Abu Dis. The relocation site was hooked up to water, electricity, and sewage, and has a school to replace the current Italian-funded institution, which was constructed from mud-caked tires and has become a symbol for the village.