“Bedouins in the West Bank hold fast to their land — as pressure builds for them to leave,” is the specious Los Angeles Times online headline last week about Khan Al Ahmar, the Jahalin Bedouin encampment in the contested E1 area east of Jerusalem. 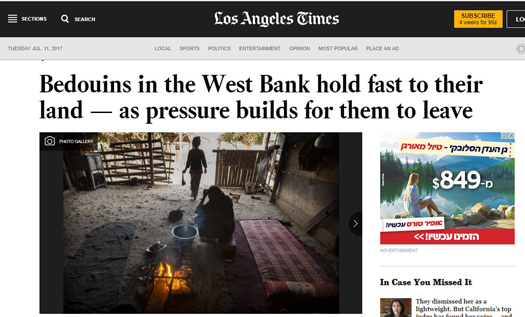 It contradicts The Los Angeles Times own past reporting about the Jahalin in the area. In January 1994, the newspaper noted: “No one, not even [Jahalin member Mohamed Ahmad] Hairsh, claims that his tribe has a legal right to be there.”

Nevertheless, as The Times’ article this week notes, the “rugged, sparse landscape”

is at the center of a political tug of war. The region is coveted by Israelis who want to expand Jewish settlements and to solidify control over Jerusalem, as well as Palestinians who see it as part of their own state someday.

The Bedouins, caught in the middle, may soon be forced from this land.

It is precisely because the strategic land sits at the center of a political tug of war that it is particularly critical that journalists responsibly report the relevant history and facts. For instance, how long have the Khan Al Ahmar homes at risk of demolition sat on “their land,” as the headline put it? From time immemorial? Before or after the 1948 war? After the key 1967 war?

In the course of a 1600 word article on Khan Al Ahmar, however, The Los Angeles Times’ Joshua Mitnick excludes this relevant information. Instead, there is a more general statement about the Jahalin tribe in the E1 area between Jerusalem and the large Israeli settlement of Maaleh Adumim: “Displaced to the West Bank from ancestral lands after Israel gained independence in 1948, the Jahalin tribes settled in the open area outside Jerusalem with their flocks of sheep and goats.”

In addition, a photo caption in the photo essay illustrating the online article likewise states that the Jahalin “fled into the West Bank as refugees in the years after Israel’s establishment.”

Is it true that the Jahalin settled the open area outside Jerusalem following the 1948 war? In 1994, The Los Angeles Times reported that (“Risk to Bedouin Campsite Reflects Mideast Land-for-Peace Dilemma,”) Israeli Army Maj. Elise Shazar, then the Civil Administration’s spokesperson, “insisted, however, that authorities have aerial photographs indicating that the Jahaleen have been there only years – not decades.” Likewise, in a 1996 interview with the IMRA news service, Shlomo Dror, then spokesman for COGAT (Coordination of Government Activities in the Territories), stated: “In 1988, the Jahalin tribe moved near Maaleh Adumim. Many members of the tribe work in Maaleh Adumim. They knew the whole time they were on government land.”

(In the 1994 article, even Lynda Brayer, a lawyer representing some of the Bedouin did not suggest her clients’ claim dated back to 1948. Rather, she claimed that most of her clients had lived in the area since the early 1960s.)

What about the history of the Jahalin specifically in Khan Al Ahmar? Aerial photographs (see below) of Khan Al Ahmar, provided by Regavim, an Israeli NGO which opposes illegal Bedouin construction, reveal no encampment of Jahalin in Khan Al Ahmar for years after the 1948 war. Indeed, a photograph of the site in 1967, nearly two decades after Israel’s war of independence, shows that Khan Al Ahmar was virtually empty. It appears that there were approximately four or five buildings there in 1980. By 1999, there were approximately up to two dozen structures at the site. The aerial images reveal that the encampment grew significantly between 2006 and 2012.

Yet the Times irresponsibly denies readers the information that the 160-person outpost sprung up only within the last 15 years or so, with a significant number of the residents having arrived within the last 10 years.

In contrast to the online headline which declares the area “their land,” the print edition sub-headline gets it right: “Desert land adopted by Bedouins is coveted by Israelis as well as Palestinians”.

How long has the Abu Dahouk family, featured in the article, lived on “their land” in Khan Al Ahmar? Again, The Times excludes this information, limiting its report to Eid Abu Dahouk’s claim that his “family is among the 7,0000 Bedouins from the Jahalin tribe who claim the Judean desert slopes east of Jerusalem as their home and cling to the remnants of their lives as semi-nomadic herders.”

“There is no way to have a Palestinian state with Israel controlling this area,” the article quotes shepherd Eid Abu Dahouk, nicknamed Abu Khamis. “If Israel evacuates the Bedouin community from this area, the boundary of Jerusalem will be extended to the Dead Sea. It will be the end of the last hope of peace.”

Abu Khamis’ claim that the evacuation of the Bedouin community between Jerusalem and the Dead Sea would lead to expansion of Jerusalem’s boundaries to the Dead Sea is unique and baseless claim.

Still, the newspaper chooses to underscore this misinformation by repeating an equally bogus variation of the same argument:

Many Palestinians and rights activists worry that evicting the Bedouins to make way for settlement growth would create an Israeli wedge between the northern and southern West Bank, making the creating of a contiguous Palestinian state physically impossible.

Indeed, the claim that Israel’s annexation of the E1 area would cut the West Bank in half, making a contiguous state impossible, is a familiar, and false, claim. Even if Israel were to annex all of E1, approximately 15 kilometers remain east of E1, enabling north-south passage and ensuring contiguity for a future Palestinian state.

The New York Times was compelled to correct a Dec. 10, 2012 claim that Israeli construction in E1 would “divid[e] the West Bank in two. The Palestinian cities of Ramallah and Bethlehem would be cut off from the capital, making the contiguous Palestinian state endorsed by the United Nations last week virtually impossible . . .” The Times’ ensuing Dec. 16, 2012 correction stated:

An article on Dec. 2 about Israel’s decision to move forward with planning and zoning for settlements in an area east of Jerusalem known as E1 described imprecisely the effect of such development on access to the cities of Ramallah and Bethlehem from Jerusalem, and on the West Bank. Development of E1 would limit access to Ramallah and Bethlehem, leaving narrow corridors far from the Old City and downtown Jerusalem; it would not completely cut off those cities from Jerusalem. It would also create a large block of Israeli settlements in the center of the West Bank; it would not divide the West Bank in two. And because of an editing error, the article referred incompletely to the possibility of a contiguous Palestinian state. Critics see E1 as a threat to the meaningful contiguity of such a state because it would leave some Palestinian areas connected by roads with few exits or by circuitous routes; the proposed development would not technically make a contiguous Palestinian state impossible.

Meanwhile, though The Times notes that the local school was “built with the help of foreign and Israeli human rights activists,” it downplays the involvement of foreigners in the area’s land dispute. Mitnick notes that “[f]oreigners, diplomats and human rights workers are frequent guests here because the encampment – illegal under Israel’s military occupation – sits on a strategic fault line of the Israeli-Palestinian conflict.” But the foreigners aren’t merely innocent or impartial bystanders peering from outside into the Palestinian-Israeli fault line as they indifferently consume the sweet tea and pita prepared by Abu Khamis’ wife, Sara. The European diplomats and NGO workers are full-fledged participants in the dispute, actively backing the illegal construction, yet another fact the article conceals from readers.

As Haaretz reported about the Bedouin residents in the E1 area:

In the past, the Civil Administration has offered residents to move to a permanent location, which the residents say does not meet their needs in terms of Bedouin lifestyle, amount of land and proximity to other Bedouin tribes. The government has avoided any large-scale evacuation of Palestinians in Area C, partly because of the involvement of European and American diplomats.

The Bedouins living in Area C near Ma’aleh Adumim endure harsh conditions and poverty, and the EU has often provided structures in their villages. These buildings have been put up illegally, but the EU makes sure to put a large sticker with the EU flag on all of them. The Civil Administration sometimes removes these structures.

Meanwhile, COGAT has reported to CAMERA that it is currently promoting 12 residential projects including infrastructure for water, electricity and sewage for Bedouin throughout Judea and Samaria (the West Bank). COGAT maintains that the projects are suitable for the Bedouin lifestyle and that many families inhabit the 200 legal buildings that Israel constructed a few years ago in the Jahalin HaVatikah neighborhood of nearby Abu Dis.

By encouraging the Bedouin to entrench themselves in the illegally built encampments on state land, while Israel has repeatedly offered alternative housing including infrastructure lacking in their current homes, the European Union is potentially providing the Bedouin false “life and hope,” and exacerbating the Palestinian-Israeli divide. Were the European Union to abandon its policy of constructing illegal shelters lacking basic infrastructure, and to instead assist the Bedouin to move to nearby legal homes with running water, electricity and sewage, Bedouin may no longer be “caught in the middle.” Nor would 12-year-old Nasrin have to wash her hair with a bucket in her dilapidated shack.