“Getting It Straight” is the promise to readers in the correction box of the Eagle-Tribune newspaper of Lawrence, Mass. Editors pledge:

The Eagle-Tribune will correct, in this space, factual errors that occur in its news column. Our continuing effort is not only to be factual, but to present information in a reasoned tone, in correct newsworthy context and in the clearest possible manner. If you have concerns regarding fact or tone, contact Senior Managing Editor Al White at 946-2000..

When a Sept. 30 headline misidentified a murdered Israeli baby as Palestinian, CAMERA contacted the paper seeking a correction.

The erroneous headline was: “Palestinian child killed as Israeli troops destroy gunman’s house.” But, as the accompanying Associated Press article by Nasser Shiyoukhi made clear:

Israeli troops today blew up the home of an Islamic Jihad gunman who carried out an attack on a West Bank settlement on the eve of the Jewish New Year, killing two people, including a seven-month-old baby. . . .

[Palestinian assailant Mahmoud] Hamdan infiltrated the Jewish settlement of Negohot late Friday, knocking on the door of a trailer where a family was enjoying a holiday dinner, residents said. One of the guests, a 27-year-old Jewish seminary student, opened the door and was shot in the chest. Then Hamdan entered the house and began shooting randomly, killing the seven-month-old baby girl. 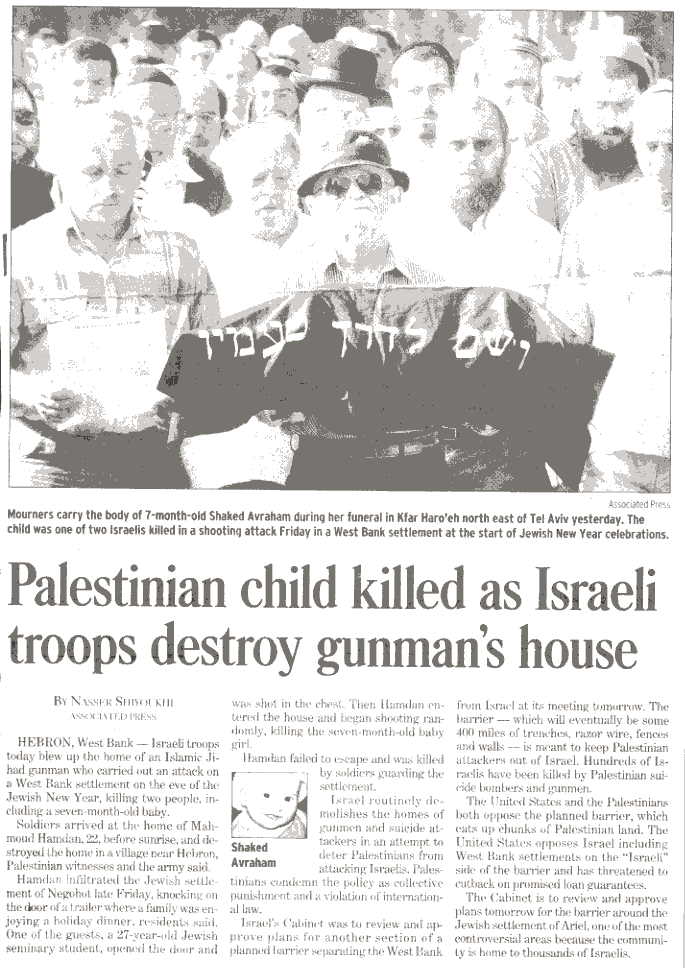 While the lead of the AP story is somewhat ambiguous as to whether the phrase “killing two people, including a seven-month-old baby,” modifies the Israeli troops’ action or the Islamic Jihad attack, the second excerpted paragraph is unequivocal.

Also, the article did not mention the killing of a Palestinian child during Israel’s retaliatory operation on Hamdan’s home because no Palestinian child was killed. According to a Sept. 30 AFP article, six “Palestinian stone-throwers” were injured in the action (“Israeli army demolishes West Bank house of Islamic Jihad militant”).

The only child to die in this unfortunate course of events was Israeli baby girl Shaked Avraham, Hamdan’s seven-month-old victim–a small photo of her appears in the middle of the mis-headlined article. Also, her tiny body, draped in a shroud, is surrounded by mourners in a large three-column photo directly above the erroneous headline. The caption reads:

Mourners carry the body of 7-month-old Shaked Avraham during her funeral in Kfar Haro’eh north east of Tel Aviv yesterday. The child was one of two Israelis killed in a shooting attack Friday in a West Bank settlement at the start of Jewish New Year celebrations.

How could the headline writer so badly err when the facts–made clear in an Associated Press story and photo caption–were in front of him? Granted, a headline writer at a small local newspaper may have little or no knowledge about the intracacies of the Middle East conflict, but it seems that the nature of his job require him to actually read the stories for which he is writing headlines. Apparently, the headline writer’s operating assumption was that when it comes to the Israeli-Palestinian conflict and a dead baby, the Israelis are culpable and the tiny victim is, of course, Palestinian. No matter what the articles themselves say.

In response to feedback from CAMERA members, the Eagle-Tribune commendably printed the following correction on Oct. 16:

Due to an editor’s error, a headline on an Associated Press story that appeared in The Eagle-Tribune on Sept. 30 incorrectly stated that a Palestinian child was killed when Israeli troops destroyed the home of an Islamic Jihad gunman. The gunman’s attack on a West Bank settlement killed a 7-month-old Israeli girl and a 27-year-old Jewish seminary student. No child was killed in the destruction of the gunman’s house. Israel routinely destroys the home of terrorist attackers to deter Palestinian attacks on its citizens.