The original published version of this report was posted by JNS, an independent, non-profit news agency specializing in coverage of Israel news and broader global Jewish news.
The nearly three-hour Center for a New American Security (CNAS) discussion (“Israeli-Palestinian Conflict”) broadcast  live May 31, 2016 from Washington, DC’s Willard Hotel on C-SPAN television (reaching potentially millions of viewers), was a case of seemingly well intentioned individuals ignoring the elephant in the room in a discussion about prospects and conditions for a two-state peace solution between Israelis and Palestinians. The audience in the hall for the public policy organization consisted of no more than a few dozen all seemingly exhibiting groupthink, but a useful challenge did occur during the time for audience questions. As if it were the key factor, much of the discussion was devoted to the feasibility of creating workable security systems needed to reassure both the Israelis and the Palestinians. 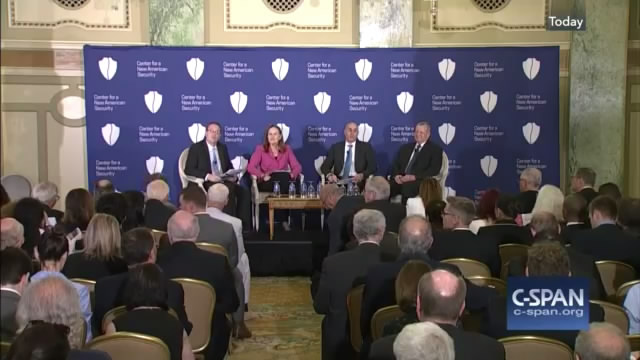 The discussion failed to deal with key problems: Palestinian leaders rejected U.S. and Israeli offers of two-state solutions in 2000, 2001, 2008 and spurned renewed talks on such an agreement proposed by Secretary of State John Kerry in 2014. The Palestinian Authority (West Bank ruler) insists on various conditions unlikely to be accepted by any Israeli government before peace negotiations can take place, including: Israel must accede to the demands that it accept Palestinian refusal to recognize Israel as a Jewish state (evidently 22 Arab Muslim states is fine but one Jewish state is one too many) and a “right of return” (that does not exist in international law) for millions of Arabs (nearly all of whom have never lived in Israel).

The closest that the discussion came to dealing with such fundamental issues springing from repeated Palestinian rejections of the two-state solution came at the outset of the discussion. Moderator Goldenberg said: “… the work … in 2000 all the way through 2013 … made it easier for negotiators to wrap their heads around what the solution might be …” If that meant it made recognition by mediators of Palestinian rejectionism unavoidable, then it was a start.
The discussion failed to touch on the demilitarization issue. Israelis, based on the painful lessons of a history of Arab aggression against the Jewish state starting in 1948, have insisted that any future Palestinian state must be demilitarized. Given large-scale arms smuggling into the Gaza Strip, even under partial Israeli blockade, and availability of arms on the West Bank, this seems unlikely. But it was not discussed by the CNAS panelists.
What if …?
During the time for questions, this dilemma was posed by the audience: What if after a peace agreement is signed, political change occurs within the two parties to the conflict? Goldenberg restated the point: “On the Palestinian side, what happens if you end up with a Hamas government [whose Islamist charter commits it to the destruction of Israel and killing Jews] or on the Israeli side, what do you do if you end up with a government that is not happy with the situation?” Allen provided the response: “That is difficult—let’s just put it that way [the audience laughs].” Later in the program the moderator commented following a lengthy Reshef monologue about security issues, “Well, thank you Amnon Reshef, about a future we believe is possible.” Indeed.
The discussion avoided dealing with Palestinian attitudes that could doom any peace process. CAMERA frequently has reported on opinion polling of Palestinian Arabs suggesting that pessimism is warranted. For example, a September 2015 poll showed that a majority favor elimination of Israel as a Jewish state and support violence against Israelis.
A brainwashed people?

About two-thirds into the program, Reshef, in a head-scratcher, asserted: “One should take into consideration that during the last almost 50 years the Israeli public was brainwashed by all of the various [Israeli] governments in the necessity of the settlements in the West Bank in order to secure Israel and all of this stuff. So, we are going to face a very difficult challenge how to change the state of mind of the Israeli people.” Reshef’s obsessive focus on settlements not withstanding, it’s unfortunate that the audience wasn’t informed that settlements comprise less than six percent of the disputed territory and that Israel in the 2008 two-state offer it made – and Palestinian leadership rejected – put forth the notion of compensating land swaps.

It’s difficult to put much, if any, credence in a lengthy discussion of the Israeli-Palestinian relationship in which the only instance of the use of the word “brainwashed” (or its equivalent) is in reference to the “Israeli public.” But Israel is a robust Western-style democracy unlike the Palestinian Arab autocratic societies of the West Bank and Gaza Strip. Belying Reshef’s false characterization of an Israeli populace brainwashed into supporting the “necessity of settlements,” opinion polling released in March 2016 shows a sharp difference of opinion which could be expected in such a vibrant, free society. Pew Research Center findings were reported in The New York Times on March 9, 2016. The Pew study “found substantial differences among Israeli Jews on crucial questions. Even among self-identified centrists, opinion was split three ways on the issue of Israeli settlements in the occupied West Bank. Over all, a third believed the settlements hurt Israel’s security, a third thought they helped security and the remainder
said they made no difference.”
A brainwashed people
Indeed, the Palestinian Arabs display signs of being a brainwashed people. There’s the incitement problem in the West Bank, led by the “moderate” Fatah movement but whose antisemitic, anti-Zionist indoctrination is difficult to distinguish from that of the terrorist Hamas in charge of the Gaza Strip. The PA presides over a society influenced for decades by a steady stream of antisemitic, anti-Israel incitement from official and semiofficial sources. This violates Article 26 (2) of the U.N. Universal Declaration of Human Rights, as well as Israeli-Palestinian “peace process” agreements. On the other hand, there is nothing in mainstream Jewish society relating to Arabs (or any ethnic/religious/racial group) that is remotely analogous to the incitement found chronically in official Palestinian sources aimed at the destruction of Israel and Jews. Palestinian Arabs have (and not surprisingly – their anti-Israel supporters elsewhere) demanded a Jew-free apartheid in the West Bank though 1.5 million Arabs live in Israel as citizens with equal rights. A panel discussion by experts that avoids this fundamental reality is of little use to viewers.
C-SPAN has a history with CNAS
This was not the first appearance of CNAS’s obtuseness on Israeli-Arab matters. Unsurprisingly, it has been seen previously in conjunction with C-SPAN. In recent years on Washington Journal, C-SPAN’s daily three-hour call-in talk-show, there have been at least three instances (documented by CAMERA’s “C-SPAN Watch” online feature)—July 29, 2012 (9:55 a.m.); June 11, 2012 (8:11 a.m.); and April 1, 2012 (9:42 a.m.)—of CNAS staffers on the show failing to refute callers’ pernicious anti-Israel falsehoods.
All in all, the CNAS/C-SPAN collaboration, rather than informing audiences about the key issues hindering Israeli-Palestinian peace prospects, has obscured these issues.