CAMERA’s 2011 study, Indicting Israel: New York Times Coverage of the Palestinian-Israeli Conflict, devoted an entire chapter to “Violence Double Standards” demonstrating how Palestinan terrorism and violence against Israelis is routinely reported through the lens of Israeli actions and Palestinian victimhood. (See here, page 53) Reporting, news placement, and photo choices are all geared toward deflecting readers’ attention away from Palestinian aggression and away from Israeli victims onto Palestinian victims of Israeli actions, even when those Palestinians are engaged in aggression against Israelis.

On June 29, shortly before 11 PM, two terrorists driving a car bearing Palestinian license plates targeted an Israeli car on the Alon road in the West Bank. That car was carrying four young Israeli men returning home from a nearby basketball game. The terrorists opened fire on the men and continued shooting even after the Israeli driver sharply turned his vehicle onto another road. The Israelis drove on for about 200 meters until they could stop and call for help. The four wounded men were evacuated to Israeli hospitals where one, Malachi Moshe Rosenfeld, died of his injuries. The Palestinian assailants fled. This was the latest of several terrorist attacks, the second deadly one, that took place in the region since Israeli security forces eased restrictions on Palestinian travel at the beginning of the Muslim Ramadan.

Several days later, on July 3, an Israeli military vehicle came under attack by Palestinian stone-throwers near the Qalandia checkpoint north of Jerusalem. The windshield was smashed. According to the IDF spokesman, the vehicle’s driver, Binyamin Brigade Commander Col. Israel Shomer, fired warning shots in the air before firing toward the assailants and killing Mohammed Hani Al Kasbah. (See Palestinian news report.) Some Palestinians claimed that the assailants were simply attempting to scale the security fence to reach the Al Aqsa mosque for prayer services when Al Kasbah was shot, but the IDF denied this.  According to Palestinian reports, Al Kasba’s funeral was attended by hundreds of Palestinians who marched from the Qalandia checkpoint to his house.

How Did The New York Times Cover These Events?

The Palestinian terrorist attack, the Israeli victims, the emotional funeral for Malachi Rosenfeld attended by thousands, elicited scant interest from New York Times staffers. A terse paragraph by Isabel Kershner in the World Briefing section covered the story, but almost half of that was devoted to an entirely different non-fatal incident in which a Palestinian was shot at a checkpoint (after he charged at Israeli security forces).

The print headline, “Man Dies After West Bank Attack,” like so many other NYT headlines about deadly Palestinian violence targeting Israelis, avoided referring to the Palestinian perpetrators and to the Israeli identity of the victim. The only identifying piece of information deemed important enough to include was the location of the murder, the West Bank, as if to suggest the victims’ presence there somehow mitigated the crime against them. (Only the Web site headline noted that the victim was Israeli.)

By contrast, the killing of the Palestinian stone-thrower received much lengthier and more prominent coverage (a 750-word article on page A6 in the international section) by the same reporter, Isabel Kershner. The headline, “Palestinian, 17, Is Killed by Forces From Israel,” immediately identified the victim as Palestinian, noted his age, and implicated Israeli forces as the perpetrator of the killing.

The article was accompanied by two photographs, a large one of weeping Palestinian women mourning the death of the Palestinian stone-thrower and a smaller one of an Israeli soldier pointing a gun at passing Palestinians. The photographs and captions reinforced and reemphasized the themes New York Times wanted its readers to retain, namely, that Palestinians were victims of Israeli aggressors on “occupied” territory.

Caption beneath first photo: “Relatives mourned the death on Friday of Muhammad Hani al-Kasba, a 17-year-old Palestinian. He was killed by Israeli forces in the occupied West Bank.”

Caption beneath second photo: “Hours after Mr. Kasba was fatally shot, an Israeli soldier stood guard on Friday as Palestinians waited to cross into Jerusalem via the Qalandia checkpoint in the West Bank.”Â

Missing From the Coverage

There was little information and no photographs of the slain Israeli, Malachi Moshe Rosenfeld,  or any of the other wounded Israeli victims of the Palestinian terrorist attack.

There was no coverage of the large funeral for the murdered Israeli. and no mention or photos of any of his mourners. 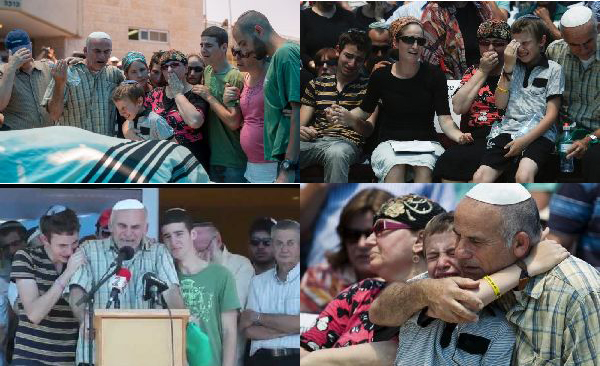 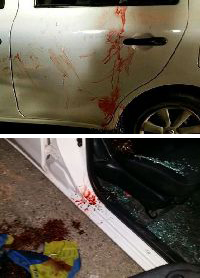 There were no photos of or captions about the bloodied Israeli car that carried Malachi and the other Israeli victims (left). Nor was there a photo of the windshield of the army jeep smashed by the Palestinian stone-throwers (below). 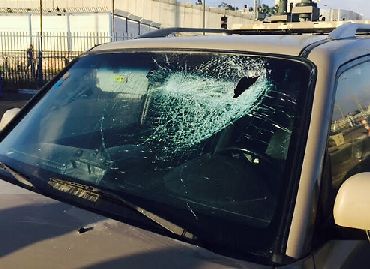