For all their high-minded rhetoric about free speech and expression, some “human rights” activists and lawyers seem zealously opposed to allowing debate. As a recent conference panel demonstrated, this is particularly true among those who seek to besmirch the Jewish state with substantively empty accusations of “apartheid” and “racism.” However, after efforts by CAMERA and others to counteract this behavior, purveyors of the libel – and their sponsors – now know they will not be left unchallenged.

As CAMERA has already exposed, Human Rights Watch (HRW) – under the imprimatur of the American branch of the International Law Association (ABILA) – was recently allowed to organize a panel on “Racism and the Crime of Apartheid in International Law” during ABILA’s annual International Law Weekend. The panel, held on October 22, featured four anti-Israel partisans, all on record accusing Israel of “apartheid,” and just one late addition, opposing panelist (Barrister Josh Kern). Despite continued inquiries and expressions of concern, no additional effort was made by the organizers to foster a more balanced, serious discussion. 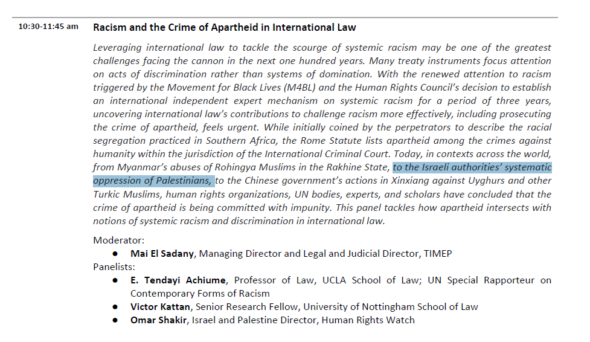 A screenshot of the language originally used in the program’s description of the panel, accusing Israel of “systematic oppression of Palestinians.”

There was even a late addition in the form of law professor Milena Sterio as a moderator, which is where some irony is introduced. Sterio’s background includes writing favorably of the infamous Goldstone Report that accused Israel of atrocities.

As luck would have it, Richard Goldstone, the former South African judge who chaired the commission which authored the report, was participating in the conference as a keynote speaker. Though his speech was sharply critical of the United States, it is Goldstone’s position on the charge of “Israeli apartheid” that is relevant.

While HRW goes to great lengths to create a false impression of a “growing consensus” that Israel is committing “apartheid,” such as through organizing one-sided panels, Goldstone serves as an example of how there isn’t even consensus in HRW’s own ideological circles

In addition to famously disowning his own report against Israel, which Sterio nonetheless described as an “invaluable contribution,” Goldstone has also openly opposed what he calls the “apartheid slander” against Israel. Had HRW or ABILA President Leila Sadat actually been interested in balance, perhaps they simply could have invited Goldstone to stick around for another hour.

As expected, Israel was the major focus of the panel, which was attended by perhaps 50-75 academics, legal professionals, and students. The United States and Myanmar were the only other two situations raised by the panelists. China’s horrifying treatment of the Uyghurs and other Turkic Muslims was briefly addressed only after being prompted by an audience member. Issues like modern-day slavery in Mauritania and Iran’s continued repression of minority groups were left unmentioned.

Panelist Mia Swart, who Leila Sadat had claimed was brought on to “assuage” concerns of one-sidedness, lamented that South Africa hasn’t pursued “strategic litigation” on apartheid to “help the Palestinians.” Swart also made a point to note that Nelson Mandela once visited with Yasser Arafat. Given Arafat’s prolific role in murdering Jews of any nationality and his regular use of antisemitic tropes, he hardly seems an ideal figure to reference positively at a panel on racism.

United Nations “expert” E. Tendayi Achiume, who largely avoided the framing her comments in the context of the law, notwithstanding the fact that she was at a law conference, suggested that apartheid is a “technology of settler colonial domination” being practiced by Israel.

HRW’s Omar Shakir claimed that the debate over the Israeli-Palestinian conflict is “mired in myth of two warring sides and ethnicities” and of “peace processes and political solutions,” suggesting that the only relevant question is “structural violence and structural oppression.” It’s a fancy way of arguing the absurd, that Israel alone bears responsibility for having survived repeated invasions and for the Palestinians repeatedly rejecting offers for statehood, and that absolutely no agency or responsibility should be assigned to the Palestinians.

The existence of even a single opposing viewpoint was still too much for some. One audience member angrily insisted during the Q&A session that Israelis are “settler colonialists.” Repeatedly interrupting as Kern tried to respond, the audience member insisted Israeli Jews are “aliens,” notwithstanding the millenniums-old, uninterrupted presence and indigeneity of Jews in the Land of Israel.

What better way to conclude such a panel than with an antisemitic rant denying Jews their history and identity?

Though only a lone opposing panelist was added to the lineup, a message was delivered after one of the main sponsors, White & Case, issued a sharply critical statement in response to repeated media inquiries and a sustained campaign by CAMERA, its supporters, and others:

“We expect the viewpoints presented at any event we support to be within a range that is non-extremist and overall balanced. We believe the panel being presented this Saturday titled ‘Racism and the Crime of Apartheid in International Law’ did not meet these criteria, and we have shared this view with the event organizers.”

HRW, as well as ABILA after the appallingly disingenuous behavior of President Leila Sadat, now must bear that public repudiation.

Furthermore, though outnumbered, Kern provided a useful framework during his brief intervention for the public to understand why actors like HRW and Leila Sadat so fear and resist any challenge to their narrative. In his conclusion, Kern argued:

“All peoples, including Israelis, Arabs, the Jewish people, [and the] Palestinian people are entitled to be free from colonialism, from foreign domination, from discrimination and from persecution. Surely, it is not beyond us to develop a human rights discourse for both Palestinians and Israelis.”

Yet, as Kern went on to note, much of the “Israeli apartheid” rhetoric “points to a discourse that is intended to return to the Khartoum agenda of 1979. No peace with Israel. No recognition of Israel. No negotiations with Israel.”

Underneath their shallow narrative of Palestinian victimization and Israeli abuses lies a morally corrupt, zero-sum vision in which Jewish rights to self-determination or to life are irrelevant or, at best, subordinate. It is a narrative that isn’t about lifting Palestinians up, but rather tearing Jews down.

Hyper-partisan organizations like HRW are of course entitled to such opinions, no matter how morally repugnant and intellectually stunted. But like for all contentious questions, answers are best found through open inquiry and vigorous debate. That an academic and legal association like ABILA lowered itself to HRW’s level should concern all serious legal professionals, academics, and students.