Media coverage of the fighting between Hamas and Israel has been criticized on many grounds, but one of the most persistent complaints notes the almost total absence of photos and video of Hamas gunmen, rockets, rocket launch sites, and rocket launch crews. At this point more than 3400 rockets and mortars have been fired at Israel, many apparently from sites near the hotels used by the more than 700 foreign journalists who are or were in Gaza. Despite this, journalists have produced only a handful of videos (here and here and here, for example) and essentially no photographs of Hamas fighters and rockets.

While some critics have cited this absence as evidence of pro-Palestinian media bias, or acquiescence to Hamas dictates and threats, many reporters and photographers have claimed that the Hamas fighters and rocket launchers were hidden, and so there was nothing to photograph or film.

For example, Anne Barnard, the Beirut Bureau Chief for the New York Times, who until a few days ago was reporting from Gaza, sent out this Tweet on August 8:
Is her claim true that the lack of Gaza photos wasn’t unusual because there also weren’t “lots of pix of Iraq insurgents vs US occupation”? Does this make her case that there wasn’t a pro-Palestinian bias or bending to Hamas threats?

In fact, Barnard and her like-minded colleagues are dead wrong, because a quick google image search for almost exactly her term, “Iraqi insurgents,” reveals numerous such photos.

Let’s start with this one, of Iraqi insurgents in Fallujah, which garnered the 2005 Pulitzer Prize:
And here are a few more, all from Iraq during the insurgency (click on the photos for further info): 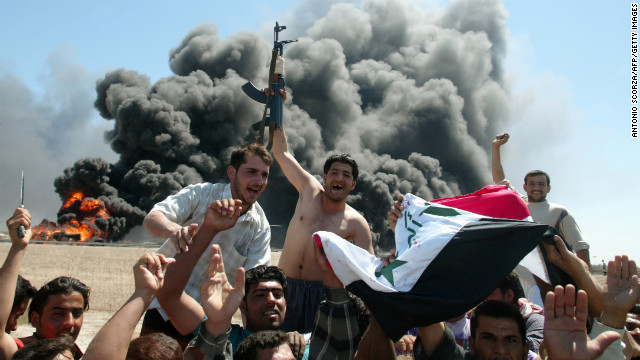 Of course, these images are just a tiny proportion of the pages and pages of photos that result from the google search cited above.
The bottom line is that the excuses offered up by Anne Barnard and her colleagues are just that, excuses, meant to hide an uncomfortable reality. Whether because of Hamas intimidation or their own agendas, journalists in Gaza did not do their basic job, which is to report without fear or favor, and to honestly recount the facts. Not ignoring what you can see from your hotel window would certainly seem to be a key part of that basic journalistic job.
Donate Now