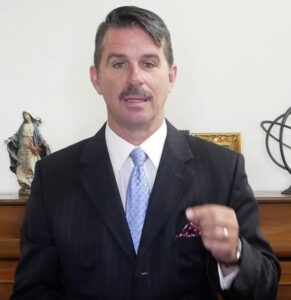 A screenshot from a Patrick Coffin video promoting a trip to the Passion Play taking place in Oberammergau, Germany in May, 2020. The video was posted on YouTube in June, 2019. (YouTube Screenshot.)

Patrick Coffin, a prominent Catholic commentator, wants us to believe that the image of super-intelligent and uber-aware commentator that he has presented in scores of videos over the past decade is not who he really is. He made this clear last week in a “Tweet” he posted in response to an article about E. Michael Jones, a notorious theological antisemite whom Coffin has fawningly interviewed three times on his podcast “Coffin Nation” since August 2018. During his appearances, Jones has spoken about horror movies, the decadence of modern architecture, and Pete Buttigieg’s presidential campaign.

In response to the article, which declared that Catholic YouTubers (like Coffin) who have Jones on their shows “should be ashamed of themselves,” Coffin responded defensively, declaring, “Sure, I’m supposed to know about and agree with 100 percent of every past statement made by every guest I have on—and I certainly must agree with your take. Kindly go away.”

Coffin suggests that he was somehow unaware of Jones’s anti-Jewish animus, and that even if he did know about these statements, it would be OK for Jones to appear on Coffin Nation because he didn’t “agree” with Jones’s antisemitism.

With his suggestion that he did not know about Jones’s past statement(s) about the Jews, Coffin would have us believe the impossible. 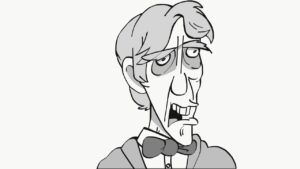 Jones is an inveterate and notorious Jew-hater and has been for years. Jones’s writings and public statements indicate he has a two-fold agenda: Put Jews back into the ghetto and gays back into the closet. Even a cursory search on Google or Amazon (where Jones’s books are sold) would reveal the anti-Jewish nature of his work. The ADL complained about him in 2013 and even if Coffin did not trust the ADL’s reporting, he should have done some digging on his own.

If he had, he would have discovered that the Catholic League called out E. Michael Jones’s contempt for Jews in 2004, declaring, “The Catholic League condemns Jones’s anti-Semitism and repudiates his efforts to justify it in the name of Catholic theology. One thing is clear: there are many choice terms one can use to describe Jones’s view of salvation history; ‘Catholic’ is not one of them.” In the intervening years, Jones wrote a book titled The Jewish Revolutionary Spirit and its Impact on World History, a text that Coffin has mentioned in his introductions of the author on his show.

In 2016, two years before Coffin interviewed him, Jones spoke to a crowd of white nationalists at an event called the London Forum, a gathering place for the folks who blame Jews for the world’s problems. He was introduced to the forum as “one of the best researchers and writers for the movements against Zionist domination of the world.”

The crowd at the London Forum cheered when Jones recounted bumping into David Duke, a former Grand Wizard in the Klu Klux Klan, at the 2015 International Identity Congress in Guadalajara, Mexico. As Jones explained to the crowd in London, Jones had no idea that Duke was going to be there. He had agreed to speak at the conference in Mexico and, lo and behold, who should show up but Duke himself!

“Anyone know who David Duke is?” Jones asked the crowd, who respond with an enthusiastic “yeah.” “A big cheer for David Duke,” Jones says, eliciting yet another roar of approval from the crowd in London. Video of the event shows Jones bathing in the approval from the crowd after mentioning Duke’s name. Apparently, he and Duke got along swimmingly despite their ideological differences.

Jones said he would not have attended the event if he knew Duke was going to be there, but he should not have been all that surprised to see him there. In his petite mémoire about the conference — published two years before his first appearance on Coffin’s show — Jones writes that it had two purposes: to celebrate the 100th birthday of Salvador Borrego, “Hitler’s foremost apologist in Mexico” and to “formulate the principles of international nationalism.” (For the uninitiated, Berrogo’s book Derrota Mundial [“Worldwide Defeat” in English] declares that the failure of Nazism was a disaster for humanity because it allowed the Jewish conspiracy to advance unchallenged after World War II.)

Despite all of this, Patrick Coffin, the Catholic journalist who has worked to expose the misdeeds of the Catholic hierarchy in the child abuse scandal that has rocked the Vatican, suggests he had no idea that Jones had the opinions he did about the Jews. But it was Jones’s contempt for Jews that helped him get traction in social media, especially with the help of professional Jew-baiter Owen Benjamin.

In his appearances in Benjamin’s videos, Jones has called the people who run the recycled clothes industry “Jewish ragpickers” and has joked about the Southern Poverty Law Center raising money by scaring “the s–t out of little Jews” and getting “them to think that some guy was going to start Auschwitz again and put them back into ovens.”

At some point, after we have disabused ourselves of the notion that Coffin didn’t know about Jones’s antisemitism, we have to consider the possibility that Coffin isn’t all that put off by Jones’s hostility toward Jews, particularly in light of a brief little hiccup that took place in late 2016.

It was a weird moment, to put it mildly. It was caught on video and posted on YouTube in late 2016 when Coffin appeared for the last time on “Catholic Answers Live,” an internet radio show broadcast out of California. He had been hosting the show for more than seven years and connected with a loyal following of listeners before venturing out with a podcast of his own. Three of his colleagues were in the studio to say farewell.

Catholic Answers President Christopher Check, a former Marine, joked that having all his staffers in the studio at once was contrary to the doctrine of dispersion “which is how you protect the Howitzers from counter battery fire,” he said. “One hand grenade here would just take out the A-Team of Catholic apologetics.”

Another staffer went along with the joke. “Good thing there are no hand grenades here,” he said, prompting Check to declare that given that it was St. Michael’s feast day the good saint was protecting them from harm.

Then the camera zoomed in on Coffin as he chimed in with a joke of his own. “You want to protect the Howitzers and the other Jewish families in the neighborhood,” he said with a smirk that turned into a frown of disappointment once he realized that his joke had bombed.

Coffin misjudged his audience. For these folks, the image of beleaguered and dead Jews is not a good premise for a joke. Nobody wanted to be the first person to laugh at an ugly jibe like that, especially since it came out of nowhere.

If E. Michael Jones was in the studio, Coffin would surely have gotten the breakout laughter he needed for his joke to work. Jones likes that sort of stuff. He loves it. He traffics in it.

The irony is this. During his career as a Catholic journalist, Coffin has railed against Catholic priests, bishops, and journalists who turned a blind eye to the abuse of children by clergy. In particular, he has condemned priests and bishops for failing to scrutinize and hold one another accountable and failing to expose and stop the sexual abuse of children.

“I’m a professional speaker,” he said in a recent podcast. “I go to conferences. I get the full background check. It’s like a digital colonoscopy check.”

And yet here is Coffin turning a blind eye to the well-documented Jew-hatred of a prominent Catholic writer.

Is that how Catholics should hold one another accountable?