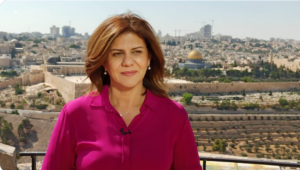 The news agency’s headline had stated “Al Jazeera journalist killed by Israeli forces in West Bank” (6:24 am GMT). (The original headline is still available at France 24).

No investigation had been completed to make this determination and  big questions surround the circumstances of the fatal shooting that took place this morning during a gun battle between Israeli troops and Palestinian gunmen.

The article itself acknowledges a military official said:

“There is an ongoing inquiry into this event. We offered and want to conduct a joint investigation with the Palestinians.”

The army said there was an exchange of fire between suspects and security forces and that it was “investigating the event and looking into the possibility that journalists were hit by the Palestinian gunmen.”

As reported by Haaretz and others, however, Palestinians have reportedly refused to cooperate on an investigation, a fact which AFP did not report. In addition, Palestinian boasts during the battle that they hit an Israeli soldier when no soldier was hit raise questions about who hit Abu Aqleh. Haaretz reported:

During the raid, according to the military, militants opened fire at the Israeli forces and hurled explosives at them, before the soldiers returned fire. No casualties were reported among the Israeli force. . . .

“I don’t think we killed her,” Ran Kochav, a spokesman for the Israel Defense Forces, told Kan public broadcaster. “We proposed to the Palestinians to open a swift joint probe. If we indeed killed her, we’ll take responsibility, but it doesn’t seem to be the case.”

“If the Palestinians cooperate we’ll have better answers,” Kochav said, arguing “they might have a good reason” not to. According to him, “the Red Crescent took the body away” immediately after the shooting.

According to the military’s Arabic-language spokesman, footage shared on social media shows Palestinian gunmen in Jenin “boasting about hitting a soldier lying on the ground,” but no Israeli soldiers were hit at all.

Palestinians in Jenin were even filmed boasting “We hit a soldier; he’s lying on the ground”. However, no IDF soldier was injured, which increases the possibility that Palestinian terrorists were the ones who shot the journalist. pic.twitter.com/K2ySJGqucH

Shortly after CAMERA’s communication with AFP regarding the headline and the additional unreported information, AFP published an updated story (8:45 am GMT) accompanied by a headline which no longer accused Israeli troops of the killing: (“Al Jazeera journalist killed during Israel West Bank raid“).

The revised article reports Al Jazeera’s unsubstantiated charge lower down in the second paragraph, alongside Israel’s speculation that she was killed by Palestinian fire. The first paragraph reports only established facts:

Additional information which appeared in the later version includes:

“Journalists must be protected in conflict zones and we all have a responsibility to get to the truth,” Lapid added. …

“According to the information we’ve gathered, it appears likely that armed Palestinians – who were indiscriminately firing at the time – were responsible for the unfortunate death of the journalist,” Bennett said in a statement.

Barron’s, which had published AFP’s earlier story with the problematic headline, has removed the article in response to communication from CAMERA.