The incomplete captions about Abu Jelda, who was fatally injured by Israeli gunfire during a home demolition, had also ignored the fact that he was participating in a gun battle when he was shot.
Thus, the captions about Hamad Mustafa Hussein Abu Jelda had noted his age (24) and that “he succumbed to his wounds, five days after reportedly being shot by the Israeli army during a home demolition in the occupied West Bank. Security sources in Jenin told AFP that Abu Jelda had been shot during an Israeli army raid on Jenin camp on September 6, to destroy the home of Raad Hazem, who killed three Israelis in a deadly shooting attack in Tel Aviv.”
A sampling of the captions as they originally appeared, without mention of Abu Jelda’s command position in al-Aqsa Martyrs Brigade and omitting the gun battle, follow:

A second Palestinian died Sunday from wounds sustained in an exchange of fire during a terrorist house demolition last week, according to the Palestinian Health Ministry.
Sources in Jenin identified the man as 24-year-old Hemed Mustafa Abu Jalda, a field commander for the al-Aqsa Martyrs Brigade. He had been wounded in an exchange of fire during last Tuesday’s demolition of the home of Ra’ad Hazem . . . 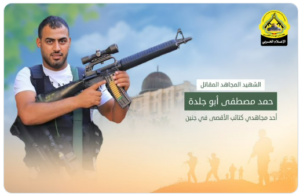 Al Aqsa Martyrs Brigade announcement about the death of their member Abu Jelda, a “jihad warrior”

Al Aqsa Martyrs Brigade has claimed him as a Jihad warrior, and his body was wrapped in shrouds emblazoned with the brigades’ logo, as AFP’s own photo shows. Why did AFP deem his age relevant to the caption while his command position in a terror group was not? And would his age be more relevant than the complete circumstances of the fatal shooting, the gun battle?
Similarly, AFP’s Sept. 11 article about Abu Jelda’s death (“Palestinian dies days after being shot in Israeli raid”) ignored the gun battle that took place at the time. It also claims that no militant group had claimed him, stating: “Pictures of Abu Jelda released by local activists showed him posing with an M16 rifle, though no armed faction has claimed him as a member.”
Yet, at least two hours before the story was published the Al Aqsa Martyrs Brigades had already claimed him as one of their “jihad warriors.”
In response to communication from CAMERA, AFP stealthily updated the captions to include his affiliation in the terror organization, referring to him as “Palestinian Al-Aqsa Martyrs’ Brigade militant Hamad Mustafa Hussein Abu Jelda.” AFP did not add any indication in its photo archive alerting subscribers to the change. An example of one of the amended captions follows: