Agence France Presse, a leading news agency which promises “the highest standards of verification,” calls on its journalists to cross-check and challenge the information its sources provides:

We have a duty to seek the truth and not passively report information as it is presented to us. We must challenge our sources. We can accurately quote a politician, but is he or she giving correct facts or telling the truth? 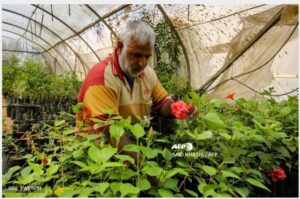 Abdel Rahman al-Najjar, the flower grower who falsely stated that the Israeli army destroyed all of Neve Dekalim’s greenhouses when they left. AFP did not correct his misinformation (AFP photo by Said Khatib)

Yet, in his Aug. 22 article, AFP’s Adel Zaanoun reproduced, without qualification or correction, a blatantly false statement by a Palestinian flower grower in the Gaza Strip who had worked in the hothouses of the Neve Dekalim settlement before Israel withdrew from the Gaza Strip in 2005. The article, “Gazans speaking Hebrew 15 years after Israel left,” quotes Abdel Rahman al-Najjar, who raises flowers and once worked in a nursery located in the former Israeli settlement of Neve Dekalim:

“I worked in a flower nursery in that settlement, but the (Israeli) army destroyed everything before leaving. . .”

In fact, as had been widely reported, US Jewish philanthropists purchased some 790 acres worth of the hothouses in the Gaza Strip in order for them to be used by Palestinians after the Israelis’ departure. As AFP itself reported on Aug. 18, 2005 (“US Jewish donors give 14 million to preserve Gaza greenhouses”):

A group of Jewish donors in the United States has given 14 million dollars to guarantee that Israeli greenhouses in the Gaza Strip will be in working order for Palestinians after the evacuation of Israeli settlers, the New York Times said Thursday.

While the Israeli government has compensated settlers for the greenhouses themselves, the donation will purchase crucial equipment like computerized irrigation systems, the daily said.

Vegetables and flowers grown in the greenhouses had been a major source of Israeli export income and provided about 3,500 Palestinian jobs, it said.

Zuckerman collected the money in 48 hours from friends and contacts at the request of his friend James Wolfensohn, former president of the World Bank and now White House envoy to the Middle East.

While some of the hothouses in Neve Dekalim were dismantled before the Israelis withdrew, others were left behind for the Palestinians, and were subjected to widespread looting. Across the Gaza Strip, approximately a third of the hothouses were reportedly dismantled, the rest purchased for Palestinian use.

Unfortunately, Palestinians stripped bare the intact greenhouses, along with all other infrastructure that Israel left behind, such as the Neve Dekalim synagogue, school and more.

NEVE DEKALIM, Gaza Strip — Palestinians looted dozens of greenhouses on Tuesday, walking off with irrigation hoses, water pumps and plastic sheeting in a blow to fledgling efforts to reconstruct the Gaza Strip.

American Jewish donors had bought more than 3,000 greenhouses from Israeli settlers in Gaza for $14 million last month and transferred them to the Palestinian Authority. Former World Bank President James Wolfensohn, who brokered the deal, put up $500,000 of his own cash.

Palestinian police stood by helplessly Tuesday as looters carted off materials from greenhouses in several settlements, and commanders complained they did not have enough manpower to protect the prized assets. In some instances, there was no security and in others, police even joined the looters, witnesses said.

“We need at least another 70 soldiers. This is just a joke,” said Taysir Haddad, one of 22 security guards assigned to Neve Dekalim, formerly the largest Jewish settlement in Gaza. “We’ve tried to stop as many people as we can, but they’re like locusts.”

For Associated Press photographs of Palestinians in Neve Dekalim greenhouses right after the Israeli disengagement, see here. The captions read:

A Palestinian carries a plastic roll he took from a greenhouse, background, at the evacuated Jewish settlement of Neve Dekalim in the Gaza Strip Tuesday, Sept. 13, 2005. Palestinian police on Tuesday blocked off abandoned Jewish settlements and chased after scavengers in a first attempt to impose law and order after chaotic celebrations of Israel’s pullout from Gaza, but the overwhelmed forces were unable to halt looting of the area’s prized greenhouses.(AP Photo/Emilio Morenatti)

A Palestinian cuts an electricity wire inside a greenhouse at the evacuated Jewish settlement of Neve Dekalim in the Gaza Strip Tuesday, Sept. 13, 2005. Palestinian police on Tuesday blocked off abandoned Jewish settlements and chased after scavengers in a first attempt to impose law and order after chaotic celebrations of Israel’s pullout from Gaza, but the overwhelmed forces were unable to halt looting of the area’s prized greenhouses.(AP Photo/Emilio Morenatti) 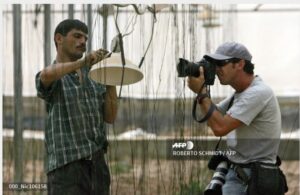 Picture dated 13 September 2005 shows Associated Press (AP) Jerusalem-based Spanish photographer Emilio Morenatti (R) shooting in the dismatled Jewish settlement of Neve Dekalim in the Gaza Strip. Morenatti, 37, was seized by four armed and masked men as he left an agency apartment in Gaza City early morning 24 October 2006 and bundled into a waiting car. No group immediately claimed responsibility for the kidnapping, the latest in a string of abductions of foreigners in the increasingly lawless Gaza. AFP Photo/FILES/ROBERTO SCHMIDT ROBERTO SCHMIDT / AFP

AFP itself had published a picture of AP’s Emilio Morenatti photographing that Sept. 13, 2005 scene of the Palestinian cutting an electrical wire at a Neve Dekalim greenhouse following the Israeli disengagement. CAMERA notified AFP editors about the falsehood yesterday but they have yet to correct the error.

Times of Israel had published AFP’s report, including the false claim that the army destroyed all of the greenhouses. In response to communication from CAMERA, Times of Israel commendably deleted from its site al-Najjar’s falsehood about the destruction of all the hothouses.

For the French version of this article, please see InfoEquitable.