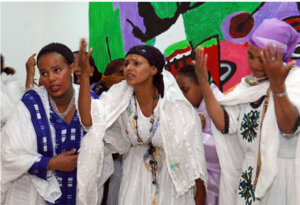 Ethiopian Jews perform a dance during a visit with President Peres, 2008, in Beit Shean, northern Israel. Seven percent of Israeli Ethiopians live in the northern district, versus just 2 percent in the West Bank. (Photo by Avi Ohayon/GPO)

The international media’s tendency to see Israel through the narrow lens of the state’s presence in the disputed West Bank leads to bizarre outcomes at times. Thus, this week Agence France Presse gerrymandered the disputed territory into a completely unrelated story: the debate over bringing relatives of Israeli Ethiopians to Israel in light of Ethiopia’s civil war.

It was only in 1984, and then in 1991, that the Jewish state organised massive air lifts for around 80,000 Ethiopians, many of whom ended up living in the occupied West Bank. (Emphasis added.)

In fact, according to Israel’s Central Bureau of Statistics, less than 2 percentof Israel’s Ethiopian Jews live in the West Bank.

Many Ethiopians live in central Israel and the southern district. Few live in the West Bank. The French version of the same article does not contain this error.

Good morning, @AFPFactCheck. @AFP errs that “many” of Israel’s Ethiopian Jews ended up in West Bank. In fact, according to Israel’s Central Bureau of Stats, <2% live in West Bank https://t.co/gPkNY6p0kL pic.twitter.com/FxJsk5083E

CAMERA brought the CBS data to the attention of AFP editors on Nov. 15. As of this writing, AFP has yet to correct the basic factual error.