The New York Times has refused to correct multiple factual errors about casualties from the fighting between Hamas and Israel. In its coverage of the conflict, the paper repeatedly told readers that Palestinians killed by misfired Palestinian rockets were actually killed by Israeli strikes.

The misinformation was part of the paper’s overall pattern of demonizing Israel while pushing the Hamas narrative. A week ago, an unprecedented front-page, above the fold feature sought to cast Israel uniquely as killers of children. Although the death of children in wartime is certainly newsworthy, the paper’s level of concern for such tragedies seems dependent on who they can cast as guilty. Children killed by American soldiers and drones, Israeli children murdered in Palestinian terror attacks, or children killed in other wars across the world—although no less tragic than those killed during recent fighting—haven’t been highlighted in this way. Why does the newspaper believe those casualties are less important for readers to take note of? (It’s worth recalling, too, that the paper buried its own reporting on three young Israeli children slaughtered with their parents in 2011 on page sixteen of the print edition.)

Meanwhile, as the New York Times News section reported false figures meant to inflate the number of casualties from Israeli airstrikes and obscure the harm Hamas inflicts on its own people, the Opinion pages became a platform for a relentless assault on Israel. One Guest Essay after another took aim at the Jewish state, while criticism of Palestinian behavior was apparently off limits. As did the paper’s news stories, an Opinion essay falsely attributed to an Israeli strike the death of Palestinian children killed by Hamas. Multiple essays called for no less than an end to Israel. One essay was accompanied by a series of maps purporting to show a shrinking Palestine that have been repeatedly shown to be false. And while the news side of the paper published a somber homage to children killed in the conflict, another Guest Essay outrageously defended and legitimized deadly Palestinian rocket attacks that targeted Israeli Jewish civilians and killed children.

Palestinian Rockets Killed People on Both Sides of Border

On May 10, when Hamas initiated the cross-border fighting by launching barrages of indiscriminate rockets into Israel and the Israeli air force retaliated with strikes on Hamas targets in Gaza, some Hamas rockets fell short and landed in Gaza.

Investigations from Gaza and Israel suggest that two misfired rockets launched by Palestinian groups that day killed sixteen Palestinians, including eight children. In reference to one rocket that landed in Jabaliya, Defense for Children International Palestine, an NGO linked to the terror group PFLP, stated on Twitter that “a homemade rocket fired by a Palestinian armed group fell short and killed eight Palestinians, including two children.”

In a second incident around 6:05 p.m., a homemade rocket fired by a Palestinian armed group fell short and killed eight Palestinians, including two children. The rocket landed in Saleh Dardouna Street near Al-Omari Mosque in Jabalia, according to evidence collected by DCIP.— Defense for Children (@DCIPalestine) May 11, 2021

Another rocket landed in Beit Hanoun around the same time, killing another eight Palestinians including six children. In a striking departure from its usual language attributing strikes to Israel, the NGO declined to blame the deaths on Israeli airstrikes: “DCIP has not yet confirmed the cause of these deaths. At the time of the incident, Israeli drones and warplanes were reportedly overhead and Palestinian armed groups were firing homemade rockets towards Israel.”

The Associated Press likewise reported at the time that “it was not clear if the blast was caused by an Israeli airstrike or errant rocket.” The AP later reported that, according to a senior Israeli military source, Israel did not strike the area where the family members were killed. The Meir Amit Intelligence and Terrorism Information Center also attributed this incident to a Palestinian rocket.

Again: On the first day of fighting alone, at least eight Palestinians, but likely sixteen, were killed by Palestinian rockets. This includes at least two but likely eight children.

The New York Times, though, repeatedly treated these as casualties of Israeli airstrikes.

A front-page article the next day, by Patrick Kingsley and Isabel Kershner, reported that “Israeli airstrikes left at least 20 Palestinians, including nine children, dead, according to Palestinian officials.” By that point, Agence France Press had already acknowledged about the casualties that “it was not immediately clear whether they all died in Israeli strikes or from a misfired Hamas rocket.” And Israeli officials had already noted that the latter was the case.

The Times reporters ignored all this, and reported only what the “Palestinians officials” — more specifically, Hamas officials, who have a record of dishonesty when talking about casualties — had claimed. The Hamas claim was false. The New York Times misinformed their readers. And the paper refused to correct the error.

This happened again in a May 16 story by Declan Walsh, which falsely claimed it was a “fact” that Israeli strikes were responsible for all Palestinian casualties. “No legal adjudication is possible in the heat of battle,” Walsh wrote. “But some facts are clear. Israeli airstrikes and artillery barrages on Gaza, an impoverished and densely packed enclave of two million people, have killed at least 197 Palestinians, including 92 women and children….” 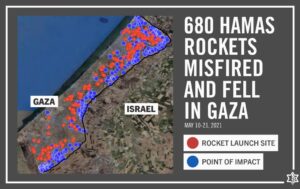 Again, Walsh’s numbers were the same ones reported by the Hamas-run Gaza health ministry, and they referred to the total death toll. By May 16, this included the casualties of the misfired rockets on the first day of fighting and likely others killed by hundreds of misfired Palestinian rockets in the days that followed. So what the Times had reported as a “fact” was, in fact, a falsehood. (Incredibly, the same article that blamed Israel for all those deaths eventually cited human rights researchers who note that Hamas tends to be cagey about admitting which of the dead are their fighters, and how many were killed by their own misfired rockets.) Again, the paper refused to correct its error.

A third piece, this time on the Opinion pages, similarly attributed deaths caused by Hamas rockets to Israeli strikes. Published online on May 11, the day after the fighting with Hamas began, the essay by Rula Salameh falsely claimed that “Israel retaliated with airstrikes on Gaza, killing at least 28 people, including 10 children.”

Those numbers included the casualties from the Jabaliya and Beit Hanoun strikes, meaning more than half of the total and child casualties that Salameh attributed to Israeli strikes are believed to have been killed by Palestinian rockets. The piece appeared in print after DCIP and Israeli sources noted that many of the deaths were caused by misfired rockets from Gaza. But despite its promises that Guest Essays are fact checked, the Opinion desk has refused to correct the error.

Moreover, as noted above, a May 25 Guest Essay by former PLO legal advisor Diana Buttu was accompanied by an image of a series of maps purporting to show a shrinking Palestine — an image that has been repeatedly shown to be false. Even after Washington Post fact checker Glenn Kessler said the series of maps “includes something that did not exist (Palestinian control over all the territory), something that did not happen (the proposed United Nations partition) and something odd (pre-1967 occupations by Jordan and Egypt are depicted as Palestinian-controlled),” the Times refuses to remove it, calling it “art.”  But artistically rendering a  falsehood doesn’t make it less false. It gives it credibility.

For detailed rebuttals of the maps images, see here, here, here, and here. The map images have been corrected by MSNBC and removed from McGraw Hill textbooks.

Unless Times editors have abandoned journalism completely — that is, reporting events and facts rigorously to inform the public and correcting errors — what explanation is there for allowing known falsehoods to remain on the record? Is animus against Israel so central to the mindset of reporters and editors that rudimentary ethics are discarded?