“They Were Only Children,” was the headline of the unprecedented and pilloried New York Times’ front-page feature last week featuring the dozens of children killed in fighting between Israel and Hamas, driving home the message that these kids had wanted to be “doctors, artists, and leaders,” as the article put it.

According to The Times’ own belated reporting, it turns out that at least one of them wanted to be a terrorist. Moreover, by the tender age of 17, he fulfilled his aspiration. In their article yesterday, Adam Rasgon (who was one of the three writers of “They Were Only Children”) and Iyad Abuheweila reported (“Gaza Militant Group Says 17-Year-Old Killed by Airstrike Was a Member“):

After a 17-year-old was killed in the Gaza conflict this month — one of 69 children killed in fighting between Israel and militants — a militant group claimed him as a member, though would not say whether he was killed while fighting.

The teenager, Khaled al-Qanou, was killed by an Israeli airstrike in the northern part of the Gaza Strip on May 13, according to a statement from the militant group, the Mujahideen Brigades. It is against international law to recruit or use minors in armed conflicts.

Mr. al-Qanou was among those pictured in a New York Times feature on all the children killed in the recent conflict, but details about his death had not been confirmed then.

That 17-year-old al-Qanou was a member of a terror group is not at all surprising. Palestinian terror groups have in the past swelled their ranks with teenagers, and even run popular summer camps for them.

As a 2016 Hamas “Vanguards of Liberation” camp promotional video said (translation by MEMRI):

These young people tour this place and look at [pictures of] the leaders, who sacrificed their souls as martyrs in Jihad for the sake of Allah, leaders who will be their role models on the path to liberation and martyrdom.

Enrollment in Hamas camps offering military training in the Gaza Strip is hardly a marginal phenomenon, as they attract tens of thousands of participants. Indeed, it would be surprising if al-Qanou was the only older teen listed in The Times report affiliated with a designated terror organization.

But The Times never said a word about how Hamas sets Gaza youth on the path of martyrdom. Here’s what “They Were Only Children” did report about the children at risk:

Gaza is crowded and its population skews young, with about half under age 18. So when Israeli warplanes hit homes and residential neighborhoods, the number of children at risk is extraordinary. Sometimes nearly entire households disappear with a single blast.

Israel blames Hamas for the high civilian death toll in Gaza because the group fires rockets and conducts military operations from civilian areas. Israel’s critics cite the death toll as evidence that Israel’s strikes were indiscriminate and disproportionate.

Apparently, The Times does not regard the indoctrination of impressionable youth to worship suicide bombers and other terrorists as a risk worthy of coverage.

Also noteworthy is the fact that The Times not only so cavalierly published unconfirmed information concerning Palestinian children killed in the Gaza Strip, but gave the inflammatory story — replete with questionable information supplied by a terror-linked NGO and social media — such prominent billing.

The revelation about al-Qanou’s terror group affiliation is hardly the only indication so far of poorly researched and unconfirmed information. As CAMERA previously noted, The Times had embarrassingly published a stock photo of a random Muslim girl mistakenly identifying her as one of the children killed in the Gaza Strip. It would be elucidating to know how that misinformation came to Times’ hands and made its way into their coverage.

Another unconfirmed element of the “They Were Only Children” story is how many were killed by misfired Hamas rockets. Here’s what The Times had to say on the topic:

While most of the children were Palestinians killed by Israeli airstrikes, there are exceptions.

At least two of the children killed in Gaza — Baraa al-Gharabli and Mustafa Obaid — may have been killed when Palestinian militants fired a rocket at Israel that fell short, according to an initial investigation by Defense for Children International-Palestine.

Even given the still partial information available at this time about all of the fatalities in the Gaza Strip, The Times has clearly grossly understated the phenomenon. According to a detailed analysis carried out by the Meir Amit Intelligence and Terrorism Information Center of the fatalities in the first days of fighting (May 10-12), eight children aged 17 and younger were killed by misfired Palestinian rockets. According to the Meir Amit center, they are:

The last two names were the only ones that The Times identified as possible, unconfirmed “exceptions” to what the paper claimed is the rule: “most of the children were killed by Israeli airstrikes.”

The other six children were killed together by a misfired Palestinian rocket, according to the Meir Amit researchers. Here’s how The Times reported their deaths, leaving out any indication that a Palestinian rocket was the apparent cause:

“It was devastating,” said Mukhlis al-Masri, a cousin. “The pain for our family is indescribable.”

(Rafah al-Masri, by the way, was the little girl misidentified by a totally random, unrelated picture.) The “paper of record” gave no additional information about Hamad and Hassanain beyond their names and ages.

Killed Alongside Their Hamas Commander Fathers

Some of the minors were the children of Hamas commanders, and were killed when their fathers were targeted. Thus, even Defense for Children International Palestine, the terror-linked NGO upon which The Times relied, acknowledged the following information regarding Muhammed Suleiman, 15, whom The Times identified only by name and age:

Mohammad’s father was reportedly a commander in Izz Ad-Din Al-Qassam Brigades, a Palestinian armed group and the armed wing of Hamas, according to information collected by DCIP.

Muhammed was killed when the Israeli military targeted his father Saber Ibrahim Mahmoud Suleiman, together in a field. The Times clearly had access to that information, and yet chose to conceal it. 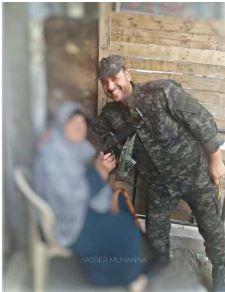 In uniform with a gun, commander Iyad Sharif, father to Mina and Lina. (Photo from Maan News Agency)

The Times also provided no detail about Mina Sharir, 2, and her sister Lina, 15. They were killed during an May 11 airstrike targeting their father. The Times of Israel reported:

A spokesperson for the Israeli military added that Israel also conducted an additional targeted killing of a Hamas commander, killing the head of the terror group’s anti-tank guided missile unit in Gaza City. Iyad Fathi Faik Sharir had led a number of attacks against Israel in recent years, the army said.

Meir Amit identified additional children killed when they were in close proximity to wanted Hamas leaders. They include Hala Rifi, 13, and Zaid Talbani, 4, killed when the military targeted Hamas counterespionage chief Wail Issa. Also killed in that airstrike was Zaid’s sister Miriam, 2. But The Times provides no details concerning the circumstances of their deaths; stating nothing more than their names and ages.

Israel takes extensive steps to reduce civilian losses when carrying out airstrikes against terror targets, with phone calls, text messages, pamphlets, and warning “knocks,” and has also called off strikes when children were found to be in the area. Civilian casualties are nevertheless inevitable in any armed conflict in which the combatants place their infrastructure and attack from within densely populated civilian areas, as the United States well knows from its experiences in Iraq and Afghanistan, among other places. The Times, however, has yet to run a feature identifying the children killed in American airstrikes in these countries.

Fighting a terrorist organization that operates within civilian areas isn’t easy. Watch as IDF pilots call off a strike because children were there: pic.twitter.com/N8ycwqwgck

As CAMERA previously noted, Israel’s record in minimizing the deaths of civilians in such conflicts compares favorably to that of other countries. Given Israel’s superior success in minimizing civilian casualties, The Times’ singular, unprecedented focus on the civilian casualties  of this conflict gives particular weight to accusations of the paper’s “blood libel” against the Jewish state.

The Times feature about the children opened:

When asked to describe how they felt, many parents answered with a simple “It’s God’s will,” their voice often reduced to a whisper, the words conveying resignation. They said their children had wanted to be doctors, artists and leaders.

Imagine if The Times report indicated which and exactly how many young lives were snuffed out due to misfired Palestinian rockets, how many would-be doctors, artists and leaders were wiped out due to their involvement instead with terror groups, and how many were tragically killed when they were in close proximity to senior Hamas targets. If the paper were to disclose that key information, readers might actually understand that the children’s deaths weren’t God’s will, or rather Israel’s will, as the paper strenuously labors to convince.

June 9 Update: Another Teen Exposed as a Hamas Member

The Meir Amit Intelligence and Terorrorism Information Center yesterday revealed that another of the children profiled by The Times is a Hamas member. About the aforementioned Muhammad Suleiman, killed alongside his father Hamas commander Saber Ibrahim Mahmoud Suleiman, ITIC reported: