For the second time in a week, Deutsche Welle has corrected after wrongly reporting that a high-level international meeting took place in Tel Aviv when it actually happened in Jerusalem, Israel’s capital.

Directly below that heading, the text of the article correctly reported that the meeting in question took place in Jerusalem, not Tel Aviv:

Netanyahu said the meeting in Jerusalem dealt with regional security issues and ways to prevent Hamas from siphoning off civilian aid to strengthen its capabilities. (Emphasis added.)

This press release from Israel’s Ministry of Foreign Affairs confirms that the meeting between Netanyahu and Kamel took place in the “Prime Minister’s Residence in Jerusalem.”

In response to communication from CAMERA, Deutsche Welle commendably corrected the heading, which now states: “Parallel talks in Israel.”

The relocation of a Jerusalem meeting to Tel Aviv was a replay of coverage last week at the publicly-funded German news outlet. 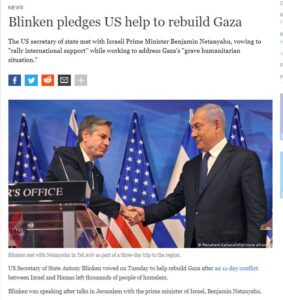 But as the article (“Blinken pledges US help to rebuild Gaza”) directly below the photo correctly reported: “Blinken was speaking after talks in Jerusalem with the prime minister of Israel, Benjamin Netanyahu.” (Emphasis added.)

In other words, an editor at Deutsche Welle actively changed Jerusalem, the correct information supplied by AP, to Tel Aviv, introducing the error.

This @dwnews article correctly reports that @SecBlinken, @IsraeliPM met in Jerusalem. So why does the photo caption directly above the accurate story falsely state the meeting was in Tel Aviv? https://t.co/5Rr3zFRWCG pic.twitter.com/JZrwuo0g5Q

Following communication from CAMERA, Deutsche Welle corrected the caption, which now accurately states: “Blinken met with Netanyahu in Jerusalem as part of a three-day trip to the region.” 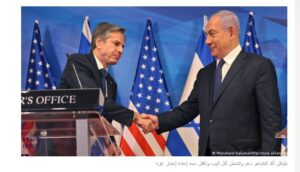 Separately, CAMERA Arabic is responsible for a Deutsche Welle Arabic caption last week which wrongly cited Tel Aviv as shorthand for Israel. A May 25 Arabic article wass accompanied by an erroneous caption: “Blinken confirmed Washington’s support of Tel Aviv to Netanyahu and discussed Gaza’s reconstruction with him.” (Emphasis added.)

Numerous media outlets including The Los Angeles Times, Washington Post, Associated Press, Reuters, Newsweek and The Guardian, among many others, have corrected reports, including in Arabic (see Al Hurra and CNN, BBC Arabic, along with Deutsche Welle Arabic) which erroneously cited Tel Aviv as shorthand for Israel.