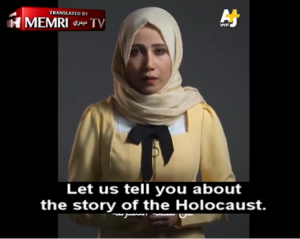 In May 2019, Al Jazeera’s “informative” video purportedly intended to educate Arabic-speaking viewers about the Holocaust sparked a scandal when it emerged that the AJ+ production categorically engaged in Holocaust denial (part 1/part 2, English subtitles by MEMRI).

Al Jazeera subsequently pulled the video within 24 hours, distanced itself from the production and suspended the two AJ+ employees blamed for its creation: Palestinian presenter Muna Hawwa, as well as Syrian producer and editor Amer al-Sayed Omar. In a subsequent letter to the network’s employees, Al Jazeera’s Executive Director of Digital Division Yaser Bishr also called for the implementation of a “mandatory bias training and awareness program.”

Nevertheless, Omar reappeared in AJ+ videos less than a year later, beginning May 2020. He even taught a “social media storytelling” class in Istanbul in cooperation with Al Jazeera’s Media Institute as early as December 2019, less than seven months after he was allegedly suspended. As of this writing, the Media Institute refers to him as one of its experts.

At the time of the video’s appearance, CAMERA Arabic documented no fewer than nine instances of Holocaust denial in Al Jazeera’s video. Alongside other lies, distortions and misleading assertions, the video:

According to their LinkedIn profiles, Hawwa and Omar have worked continuously at Al Jazeera since 2016 and 2015, respectively.

Hawwa’s LinkedIn profile, where she also identifies as “self-employed,” is the only indication suggesting that she is still on Al Jazeera’s payroll. (Separately, she recently married an active Al Jazeera correspondent, Palestinian journalist Adnan Borini). 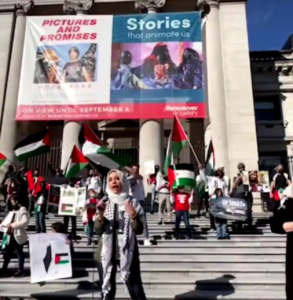 Currently dividing her life between Vancouver and Doha, Hawwa recently participated in a live panel in the Qatari capital alongside The London Times’ newfound star Muna el-Kurd.

Despite continuing to present themselves as Al Jazeera journalists, neither Omar nor Hawwa has publicly acknowledged their wrongdoing with the original video, let alone admitted that the mass extermination of Jews was actually not just “a Zionist narrative.” To the contrary, Hawwa issued an unrepentant statement upon her suspension. She also later referred to Israel (in her words, “the occupation,” “the entity,” “the Zionist regime”) as “Nazi” at least four times in Twitter alone.

Furthermore, there is no indication that either of the two has ever undergone a “bias training and awareness program” of the kind Al Jazeera promised to improve coverage of Jews and other minorities.