(Nov. 15, 2021 Update: The Israel Institute of New Zealand has weighed in on the controversy, asking its supporters to contact NZFF to warn its viewers about problems with “‘Til Kingdom Come.” For more information go here.)

The New Zealand Film Festival is currently showing the dishonest film, “‘Til Kingdom Come” produced by filmmakers Maya Zinshtein and Abraham (Abie) Troen. CAMERA has sent a letter to NZFF asking that it warn its viewers about the problems with this film, which was marred by two doctored quotes and numerous other problems when it was first shown to viewers in late 2020.

Upon learning of the showings, CAMERA sent a letter to NZFF’s chair, Catherine Fitzgerald. The letter is excerpted below.

I write from the offices of the Committee for Accuracy in Middle East Reporting and Analysis (CAMERA), a media monitoring organization that promotes fair and accurate coverage of the Middle East with an emphasis on the Arab-Israeli conflict. We have offices in North America and Israel.

Our work can be seen at camera.org.

I write to you about “‘Til Kingdom Come,” a film that is scheduled to be shown in the next few weeks at various locations in New Zealand under the auspices of NZFF. This film was filmed by Abraham (Abie) Troen and Maya Zinshtein, who also directed the film.

I write to inform you about a number of ethical and journalistic lapses in this film and about the controversy surrounding its distribution in the United States. In sum, the film fundamentally mischaracterizes the subject it purports to cover.

Its viewers in New Zealand need to know that.

In particular, you should know that the version shown to audiences in the United States included two doctored quotes that misled viewers into thinking that two prominent public figures in the United States said things they did not say. These quotes have been corrected after they were publicized by CAMERA, but there is no guarantee that the remainder of the dialogue in the film is accurate. In fact, there is every reason to believe that there are other undiscovered deceptions and distortions in this film.

The doctored quote fundamentally mischaracterized U.S. policy in the Holy Land as enunciated in a Jan. 20, 2020 White House press conference.

After this false quote was exposed, the American non-profit television network, PBS, postponed the broadcast of this film on its weekly series Independent Lens.

Sandoval-Palos declared that the edited statements altered the meaning of what was actually said, stating, “If fact-checking had been done before the film’s completion, it missed an edit that should have triggered a deeper examination of how the raw material was used.”

He also said that the changed quote “is reason enough to review the entirety of the film in search of other scenes, other edits, that could be called into question.”

Sadly, Sandoval-Palo’s concerns were proven to be well founded with the discovery of yet another doctored quote attributed to David Brog, the founding executive director for Christians United for Israel. The film mischaracterizes what Brog said in a manner similar to what it did to the words that came out of the mouth of former U.S. President Trump.

In addition to omitting crucial aspects of Brog’s 2018 speech to CUFI from their film, the filmmakers also cobbled together statements made at disparate points in his speech to portray Evangelicals as attempting to stop aid to the Palestinians when in fact, Brog’s goal was to transmit it to the Palestinians through the United States Agency for International Development (USAID) instead of the United Nations Relief and Works Agency. 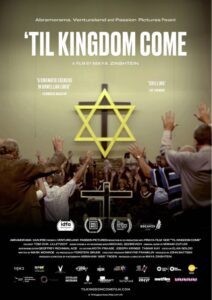 A deceptive film has made its way to New Zealand.

The film also mischaracterized a statement by former U.S. Secretary of State Mike Pompeo. Pompeo was portrayed as if he was speaking about the end times in the context of the Middle East during his tenure in the Trump administration. In fact, the footage of Pompeo speaking about the “rapture” was recorded as he was responding to a domestic issue — a Supreme Court decision on same-sex marriage — when he was a representative from the state of Kansas years before he served as Secretary of State.

The film also omitted efforts on the part of Evangelicals, some of whom were profiled in the film, to promote normalization agreements between Israel and Arab countries in the Middle East. Prior to the film’s release, Zinshtein bragged about having learned about Evangelical involvement in these normalization efforts but did not tell her viewers about these efforts — which clearly undermined her portrayal of Evangelicals as warmongers — in the film itself. (This egregious act of deception, which, to the best of our knowledge, has not been corrected, is documented here.)

In light of these problems, we ask that the New Zealand Film Festival alert its viewers donors, and stakeholders about the problems with this film which are clear violations of journalistic standards. We also ask that viewers be informed that the version of the film they are seeing is a corrected version — different from the one first shown to audiences outside of New Zealand.

In alerting viewers, supporters, and stakeholders about the presence of two doctored quotes in previous versions of “‘Til Kingdom Come,” NZFF will affirm the need for documentaries to adhere to standards of accuracy and accountability.

I look forward to your response. […]

Committee for Accuracy in Middle East Reporting and Analysis

(CAMERA articles detailing the problems with the film can be seen here.)