CAMERA Arabic this week prompted correction of a false online Arabic report at Alhurra, the U.S.-based public satellite television channel, which had falsely charged that Israeli Minister of Health Yaakov Litzman had said that the coronavirus disease is divine retribution for homosexuality. Numerous international media outlets in the United Kingdom, Australia, India and Pakistan (where  the false account originated) had previously corrected the fake news story thanks to communication from CAMERA’s UK Media Watch.

The April 18 Alhurra article originally carried an erroneous headline, stating about Litzman: “He claimed that it is a divine punishment and got infected with coronavirus — an Israeli minister insists on breaching quarantine. …”

The Business Line web site [an Indian online newspaper whose correction was prompted by UKMW] has quoted a report, published by ‘Times of Israel’, that the minister – who considered the ongoing spread of the Coronavirus a divine punishment for homosexuality – has breached the quarantine that was imposed on him. 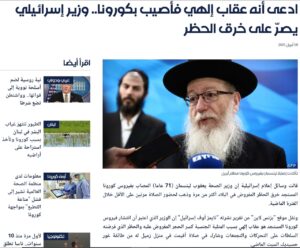 A screen shot of the original Alhurra report

Following communication from CAMERA Arabic, Alhurra editors quickly amended the item’s headline and prominently placed a clarification at the top of the article. The editors’ transparent, commendable steps to set the record straight made clear that Litzman has never attributed coronavirus to divine punishment, let alone for homosexuality. Alhurra’s follow up also addressed the possible source of the error. A Times of Israel report noted that ultra-orthodox Rabbi Me’ir Mazuz, not Yaakov Litzman, cited “pride parades” as responsible for the pandemic. The amended headline clearly states: “Israeli Minister of Health did not argue that coronavirus was a divine punishment.” The clarification states (CAMERA Arabic’s translation):

The statement by Rabbi Meir Mazuz that the outbreak of coronavirus is a divine punishment due to homosexuality has caused confusion in several web sites, which attributed these statements to the Israeli Minister of Health Ya’akov Litzman. The Alhurra website has quoted these false reports. A correction of this information is therefore required, in accordance with what [our] professional standards [also] dictate …