The World Health Organization (WHO), the United Nations agency responsible for international health under the helm of Director General Tedros Adhanom Ghebreyesus, has been increasingly criticized for playing politics by allowing China to downplay and conceal information about the novel coronavirus outbreak in that country, for refusing to declare Covid-19 a global emergency from the get-go, and opposing travel bans to China. 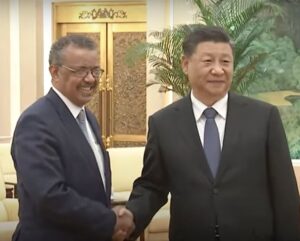 Tedros, an Ethiopian microbiologist who was elected for a 5–year-term as director general of the UN’s health organization in 2017, met with the president of the People’s Republic of China in late January to deferentially laud “the actions China has implemented in response to the outbreak, its speed in identifying the virus and openness to sharing information with WHO and other countries.” He expressed appreciation on behalf of the WHO for China’s “seriousness” and “transparency” in its approach to the epidemic. But more and more information emerges about China’s concealment of the extent of the Covid-19 outbreak, under-reporting both the numbers of infections and deaths from the disease, and as a result worsened the impact of the pandemic in the U.S. and European countries. As skepticism and criticism of China’s actions mounted across the world, China publicly revised the number of deaths in Wuhan upward by 50%.

Yet, while the WHO was praising China’s handling of the situation, China’s Communist authorities censored information about victims of the disease and muzzled physicians who tried to sound early warnings about its outbreak. Citizen journalists who were posting videos and stories from inside Wuhan suddenly disappeared and American journalists from The New York Times, Washington Post and Wall Street journal were expelled from China. Even after Chinese officials recognized the gravity of a looming pandemic, health officials continued to publicly downplay the threat. Publication of academic research on the origin of the virus was subject to vetting and approval by Chinese central government officials.

The Chinese government informed the WHO about the virus outbreak at the end of December, a month after it was first detected in Wuhan, but imposed a lockdown on that city only toward the end of January, allowing people to gather in large numbers and to travel in and out of the disease’s epicenter. The WHO leadership, rather than alerting the rest of the world to the threat of the pandemic, chose to pander to the Chinese government, echoing its own public statements and praising its actions while opposing travel bans to China.

A Wall Street Journal editorial points out that the coronavirus epidemic “has exposed the [WHO’s] process for declaring emergencies as prone to politicization…” But this was not the first time that the WHO director-general has been criticized for allowing political considerations to influence him to cover up epidemics and human rights abuses. Nor is it the first time the WHO has been criticized for using its platform for partisan propaganda.

Much the same can be said of the WHO’s politicization of healthcare in the West Bank and Gaza.

WHO’s Eastern Mediterranean division is overtly partisan: Its literature consistently refers to the disputed land of the West Bank and Gaza as “Occupied Palestinian Territories” and, along with its reports, include incendiary propaganda claims, with the WHO imprimatur. The current regional director of the Eastern Mediterranean region is Dr. Ahmad al-Mandhari from Oman whose term began in June 2018.

The anti-Israel bias of the Eastern Mediterranean region of the WHO is akin to that of the Arab-Soviet-Third World bloc that dominated the UN General Assembly and other bodies of the organization since the mid-1970’s. These countries voted together as a bloc to pass resolutions demonizing Israel under the guise of support for the Palestinians, including the infamous (now repealed) 1975 Zionism-is-Racism resolution. 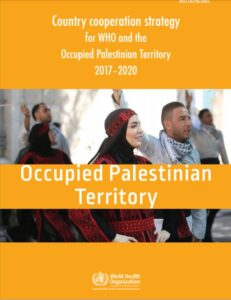 Chronic effects of the occupation and prolonged conflict have been exacerbated by continuous settlement expansion, the acute humanitarian crisis that followed the July–August 2014 war in Gaza and the violence that erupted in late 2015 in the West Bank and continued into 2016…

In the West Bank and East Jerusalem, illegal settlement construction has expanded through confiscation of land, demolition of Palestinian houses, settler violence, forced displacement and depopulation of rural areas. The security wall separates East Jerusalem from the rest of the West Bank, restricting movement, trade and access to referral health facilities and emergency health care…

According to the Ministry of Health, Israeli security forces in the West Bank and Gaza killed 129 Palestinians in the last three months of 2015 and intensified access restrictions across the West Bank, erecting additional checkpoints, roadblocks and security controls that resulted in long delays for patients referred to health care facilities…

Similarly, the WHO’s most recent report on Palestinian health care, “Right to Health”, published at the end of 2017, was crafted to blame Israel for limitations in Palestinian access to healthcare. According to the executive summary, the purpose of the report was to provide:

While noting that the PA and Hamas have responsibilities for providing appropriate healthcare to their people, the WHO report lays the blame for Palestinian healthcare problems squarely on Israel:

Israel as occupying power has the primary responsibility for ensuring the right to the highest attainable standard of health for the Palestinian population in the West Bank, including East Jerusalem, and the Gaza Strip…The Palestinian Authority and the de facto authority in Gaza have responsibilities for the provision of health care to the occupied Palestinian population, and the Palestinian Authority has acceded to 20 international Covenants and Conventions, including 8 human rights treaties. These authorities are duty bearers to the extent of their jurisdiction, but Israel as occupying power bears ultimate responsibility. 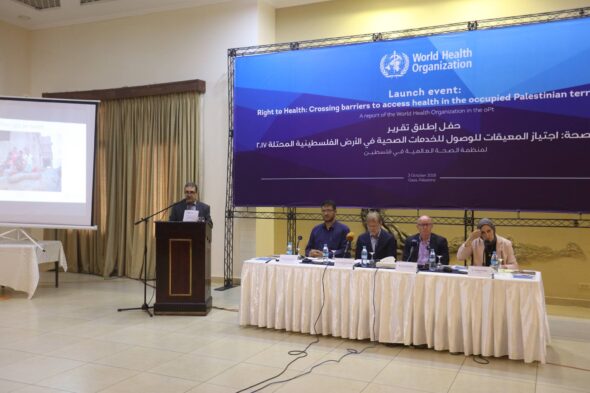 What is missing from both the CCS and report on Palestinian healthcare is the context of Israel’s complete withdrawal from the Gaza Strip and its takeover by Hamas. There is no discussion about the effect of Palestinian terrorism that impacts the delivery of healthcare, nor of the decisions by the leadership – the Palestinian Authority (PA) that runs the West Bank and Hamas, the terrorist group that runs Gaza – that have an impact on the delivery of healthcare. There is, for example, nothing about the subverting of medical ambulances by terrorists, Hamas’ rejection of essential medical supplies from Israel, or the diversion of resources by Hamas to benefit its terrorist infrastructure; nothing about the reduction of essential services and halting of medical shipments by the PA to Gaza resulting from the internecine Palestinian fighting between the PA and Hamas; no discussion of the PA’s role in delaying or suspending payments for the referral of patients to medical treatment outside Gaza, denying access to Israeli hospitals to average Palestinians while allowing senior Palestinian officials to avail themselves of Israeli care. WHO’s refusal to address the complexities of the situation and all the factors that disrupt optimal healthcare for Palestinians is problematic and speaks to its lack of credibility on the subject.

Like its reliance on the Chinese Communist government as a source of information on the coronovirus outbreak, the WHO’relies on Gaza’s Health Ministry officials as a source of information. These officials are, after all, employees of Hamas, a terrorist regime sworn to Israel’s destruction. Indeed, the Hamas Interior Ministry has issued guidelines for reporting events and discussing them with outsiders. It is no wonder then that health ministry officials have been proven again and again to lack credibility.

With the Hamas ministry the source of its information, and by gnoring and concealing the decisions and activities of the Palestinian leadership that affect medical care delivery to Palestinians, the WHO’s reports amount to nothing more than partisan political documents that are weaponized by those who seek to demonize Israel. Thus, the latest report was cited as a definitive assessment of the situation in news reports and by such organizations as Human Rights Watch, Amnesty International, Physicians for Human Rights, Medical Aid for Palestinians, which take a comparable politicized anti-Israel approach to problems in the Palestinian healthcare delivery system.

The WHO’s Eastern Mediterranean region country-specific website for what it calls “Occupied Palestinian Territory” serves as a disseminator of crude anti-Israel propaganda in the form of videos, health situation reports, referral access reports and interviews that are twisted to demonize Israel.

It has taken a global pandemic to shed light on the fact that the United Nation’s World Health organization (WHO) is not the politically neutral organization it was meant to be – not in communist China nor in the Middle East. If the WHO is to reclaim its original mission of promoting health and keeping the world safe, it must become a neutral arbiter of healthcare by renouncing political partisanship across the board.