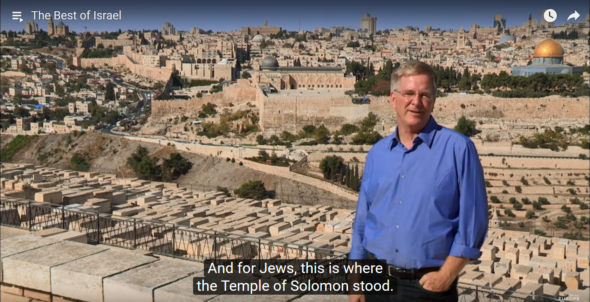 PBS travelogues involving Israel are often biased against the Jewish state. Evidence of this bias can be found in the April 2020 broadcast which features Rick Steves, the series longtime writer, producer and star. Originating in November 2014, the recent broadcast, titled “Rick Steves’s Europe: The Best of Israel,” has been viewed on various PBS stations across the country (including WGBH/Boston on April 5).

This production contains misleading assertions and is awash in false equivalency between the actions of Israel and those of Palestinian terrorists, and between the role of the Jewish and Islamic faiths in the Holy Land.

For Christians, this is where Jesus was crucified and resurrected. For Muslims, this is from where Muhammad journeyed to heaven. And for Jews, this is where the Temple of Solomon stood. The crossroads of three great religions, the Holy Land has been coveted and fought over for centuries.

This phrasing erroneously places the Islamic connection to Jerusalem on par with that of Judaism or Christianity. It can also be used in support of false Palestinian claims to Jerusalem, especially the claim over the Temple Mount (known to Muslims as “Haram al-Sharif” – the Noble Sanctuary).

The reality is that while the Temple Mount is Judaism’s holiest site, the Noble Sanctuary ranks only third, at most, for Muslims, after the sites located in Saudi Arabia’s Mecca and Medina. Israel, in order to maintain peace, has allowed the Jordanian Waqf, an Islamic religious trust, to supervise the site. The Waqf prohibits Jewish religious activity at this Jewish holy site. The two Islamic structures that now exist on the Temple Mount resulted from conquests by Islamic armies from the Arabian Peninsula. These conquests took place more than a thousand years after the Temple of Solomon existed on the Temple Mount.

Furthermore, while there is substantial historical and archeological evidence for significant Jewish connection to the Temple Mount, as well as to the entirety of Jerusalem and the Holy Land, there is no evidence whatsoever that Muhammad ever traveled to Israel or any part of the Holy Land.

Both peoples struggle to find an equitable and peaceful way to share what they each consider their rightful homeland.

The Jerusalem Center for Public Affairs (JCPA) August 2017 document, “Who Are The Palestinians,” states this about the term “Palestine”: “What is the source of the name ‘Palestine?’ It is not Arab; it is derived from the name ‘Palestina’ by which the Roman Emperor Hadrian chose to call the land after the defeat of the Bar Kokhba [Jewish] Revolt in 135 CE. His aim was to erase ‘Judea.’ According to Palestinian historian Muhammad Y. Muslih, during the entire 400 year period of Ottoman rule (1517-1918), before the British set up the 30-year-long Palestine Mandate, ‘There was no political unit known as Palestine.’ In Arabic, the area was known as al-Ard al-Muqadassa (the holy land), or Surya al-Janubiyya (southern Syria), but not Palestine.”

The law aspect can be summarized as: The Balfour Declaration of 1917, and the 1922 League of Nations Palestine Mandate, Article 6, laid down the Jewish legal rights in Palestine and encouraged “close settlement by Jews on the land” west of the Jordan River—the heartland of ancient Israel. This covered not only what was, in 1948, to become Israel, but also the West Bank and the Gaza Strip.

In 1947 the United Nations issued the partition resolution which led in 1949 to Israel’s admission to the UN and recognition as a state by most other states.

Additionally, Jews have had a continuous presence in their ancestral homeland—a presence that predates, by thousands of years, the Arab and Islamic conquests of the 7th century. Since the 1820s, Jews have also constituted a majority in the city of Jerusalem.

Around here, one man’s terrorist is another man’s freedom fighter. In the name of defense against suicide bombers, Israel has built what it calls a “security fence,” and what millions of Palestinians consider a degrading and illegal land grab. And Israel is further asserting itself by building communities for hundreds of thousands of Jewish settlers across the West Bank border, in what Palestinians consider their territory.

Commenting on this passage, CAMERA’s Steven Stotsky wrote in a July 2014 review of Steves’ hour-length “The Holy Land, Israelis and Palestinians Today” (2014):

Steves repeatedly invokes the canard that one man’s terrorist is another man’s freedom fighter. This excusal of terrorism seems to be an attempt to equalize the claims of the two parties—when in fact only one side is sending suicide bombers into cafes and family gatherings to target and murder the other side’s civilians. His failure to deal with the culture that spawns and celebrates terrorism is underscored by his failure to address the incitement to hate Jews recited in Palestinian media, government, religious institutions, and schools. Murderers of Jews are held up as icons to be emulated. City squares, schools, even girl-scout troops honor the perpetrators of horrific massacres of civilians. There is no equivalent to this pathology in Israeli society.

Steves omits that the purpose of the security barrier is to prevent Palestinian terrorists from murdering Israelis. It includes less than eight percent of the West Bank. The barrier was constructed in response to the “al-Aqsa intifada,” the 2000 – 2004 Palestinian terror war in which more than 1,000 Israelis – Jewish and Arabs, more than three-fourths of them non-combatants – and foreign visitors were murdered, most by Palestinian terrorists crossing unimpeded from the West Bank. The barrier has contributed significantly to the roughly 95 percent decrease in lethal attacks from the area.

Steves ignores the cradle to grave indoctrination of Palestinians to hate and commit violence against Jews which has been continuously documented for several decades by Palestinian Media Watch and CAMERA.

For example, Palestinian Authority President Mahmoud Abbas was seen on PA TV in September 2015 teaching Islamist hatred of Jews: “We bless every drop of blood that has been spilled for Jerusalem, which is clean and pure blood, blood spilled for Allah, Allah willing. Every Martyr will reach Paradise, and everyone wounded will be rewarded by Allah. The Al-Aqsa [Mosque] is ours, the Church of the Holy Sepulchre is ours, and they [the Jews] have no right to defile them with their filthy feet. We will not allow them to, and we will do everything in our power to protect Jerusalem.”

The pilgrims’ journey ends in the Church of the Holy Sepulchre on Calvary Hill, or “Golgotha.” Today, the dark, sprawling church is the most sacred site in Christendom. While Emperor Constantine had the first church built here in the fourth century, most of today’s church is the work of 12th-century Crusaders. Built around the tomb, or “sepulchre,” of Jesus.

But he fails to show or even mention the alternate site for the burial, the “Garden Tomb” (located outside the walls of the Old City), which is favored as the actual burial site by many American Christians, particularly evangelical Christian Zionists. A feature adjacent to the “Garden Tomb” site is a limestone hill containing a large outcropping in the likeness of a skull. Nothing like this exists at the Church of the Holy Sepulchre.

Christians, who are mostly Arabs, make up a very small and shrinking minority.

Israelis are developing settlements — secure and gated communities on the tops of hills — reaching far into Palestinian territory. And there’s the wall. In the name of its security, Israel has built what it calls the “security fence” and what millions of Palestinians think of as an affront to their dignity, and a land grab — as it often encroaches beyond the internationally agreed-upon border and well into Palestine. This struggle has been difficult — with killings and tragedy on both sides. While one man’s terrorist may be another man’s freedom fighter, the fact is, in recent decades, both sides have suffered terribly — Israeli Jews have been killed by Palestinians, and Palestinians have been killed by Israelis.

Steves seems unaware here that there has never been a sovereign nation of “Palestine” though the term could refer to an imputed Arab objective. Another problem is that this usage is a staple of anti-Israel advocacy groups.

CAMERA’s Dexter Van Zile has shown how Steves denigrated or defamed pro-Israel Jews in a 2019 speech by the travel guru (“Steves falsely suggests that pro-Israel Jews were able to prevent one of his segments from being aired in New York because it was too pro-Palestinian. ‘It never aired in New York because it called Palestine ‘Palestine,’’ he said. In fact, two PBS stations aired the show in New York when it was released in 2014.”).

Van Zile also highlighted how, in a PBS production in 2009, Steves played the role of an apologist for the Islamist dictatorship of Iran ( “Steves sees a flag that declares ‘Death to Israel,’ but dismisses this image (which he admits is disturbing) as apparently resulting from ‘a deep-seated resentment of Western culture imposed on their world.’”).

Nevertheless, Steves is an icon to many. For example, the New York Times in March 2019 extolled him as the “travel guru who wants to save the world” and “Steves has established himself as one of the legendary PBS superdorks — right there in the pantheon with Mr. Rogers, Bob Ross and Big Bird.” And Yale University praised his work as, “the perennially popular Rick Steves’ Europe program on PBS.”

But Steves’ omission-littered travelogues are not consistent with responsible journalism and fairness. Moreover, since PBS stations are beacons to America’s opinion molders, such as teachers, writers, and broadcasters – and since the network is made fungible by taxpayer dollars – it needs to hold Steves accountable for the falsehoods and false equivalency that his show indulges in.