Canadian author Marcello Di Cintio published a book dedicated to walls around the world, a project that he undertook after visiting Israel’s West Bank security barrier. Since the 2012 publication of Walls: Travels Along the Barricade, Di Cintio continues to visit walls across the continents. But news consumers should nevertheless not mistake Di Cintio for any kind of authority on Israel’s security barrier. Indeed, in a 54-minuted interview Feb. 28 with Nahlah Ayed, host of Canadian Broadcasting Corporation’s “Ideas,” a nightly radio broadcast, the two repeatedly discussed the Israeli security barrier, but not once did either Di Cintio or Ayed mention the reason for its construction in the early 2000s: hundreds of Palestinian bombings and other fatal terror attacks which killed nearly 1,000 Israelis (“A Symbol of Failure: The Resurgence of Border Walls“). 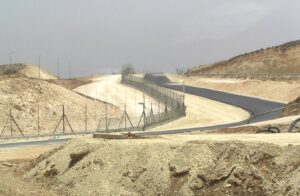 In their entirely propagandistic depiction of Israel’s live-saving barrier, the duo dwell on the supposed “illusion of effectiveness” of the barrier, ignoring that hard data demonstrates that barrier’s effectiveness, not failure. But again, Di Cintio and Ayed never mentioned the purpose of the barrier – to stop terror attacks – and instead present it as a “frontline weapon” in the “battle to delineate ‘here’ and ‘there,’ as well as to define ‘us’ and ‘them.'”

In the interview, part five of the CBC series “Walking the Border: Walls That Divide Us,” Di Cintio says of walls around the world:

They look good on television. They appear as if someone’s doing something about a problem. The –Israel’s wall around the West Bank – people walk through it and pass it all the time every day. But it looks really great on television. If offers a sense of security if not actual security. So the walls have that visual caché to them that gives the illusion of effectiveness. A sense of security is not the same as security. But it’s still something. It’s still something that people cling to, that they feel safer even if they’re not. Depending on what does safer even mean. So they’re theatrical.

[Later in the interview, Di Cintio appeared to completely contradict his own argument that the people pass through the barrier all the time and are therefore not effective. Towards the end of the broadcast, he remarked that as a white person, “I could just traipse back and forth through the fortress barriers when everyone around me could not do that.”]

Since neither Di Cintio nor Ayed fail to state what security does mean in the context of Israel’s West Bank barrier, we’ll explain: It means riding a bus to school, or joining friends for a bite at the local pizzeria without being blown to bits. It means attending your friend’s or cousin’s bar mitzvah celebration, or the family Passover seder at a hotel, and not finding yourself in a the middle of a massive, fatal terror attacks. These actual cases are very basic criteria of safety, and yet Di Cintio and Ayed conceal them from CBC listeners.

Of course, in their failure to mention what the barrier is meant to prevent, the pair cannot possibly evaluate its effectiveness. So, again, we will provide you with data that CBC hid from its audience. According to Israel’s Ministry of Foreign Affairs:

Data reveals a clear correlation between the construction of the fence and a drop in the number of terrorist attacks from those areas adjacent to the parts of the fence that have been completed. 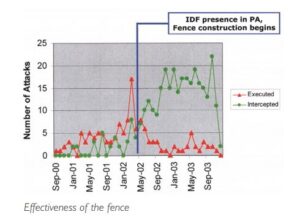 From that area where construction of the antiterrorist fence has not yet begun, namely the southern part (Judea) of the West Bank, no decrease in the number of terrorist attacks has been noted.

Once the construction of the anti-terrorist fence will be completed, the overall number of terrorist attacks against Israeli population centers is expected to
decrease immensely

The Israel Defense Forces reported in 2015:

During the Second Intifada (2000-2005), terrorists from Judea and Samaria executed horrific attacks including shootings, suicide attacks, and bombings. The violence proved to be most fatal between 2001 and 2004, when 984 Israelis were murdered. As a direct response to the attacks, the IDF began construction of the security fence. …

The security fence has reduced suicide attacks to zero.

An additional indication of the barrier’s effectiveness is the drastic drop in shooting attacks along the highways. The IDF report continued:  “Just 5% of the security fence is made of concrete. The concrete areas, which are built near roads to prevent shooting attacks, have proven very effective.” Despite the fact that only five percent of the barrier is a wall, Di Cintio and and Ayed grossly mislead and refer to it only as a wall, again concealing information from listeners.

You’ve mentioned the West Bank and Israel a few times. People have died on that barrier and communities are shattered by it and there are negative effects on both sides.

I had a fascinating time with an NGO in Jerusalem, an Israeli NGO, that talked about how the wall around the West Bank, especially the walls in Jerusalem, the terrible effect they had on the Israeli population in West Jerusalem. Crowded hospitals. It’s cut the economy. You know, Bethlehem and Jerusalem used to be sister cities with all this commerce in between. Now that’s gone. So there are all these ways that the wall impact negatively on the people that are there that have nothing to do with security, nothing to do with immigrants, nothing to do with smuggling.

Suicide bombings also crowd hospitals with the dying, maimed and emotionally shattered. Fatal shooting attacks at supermarkets also kill the economy. But Di Cintio does not share these life-threatening factors with listeners. Nor does he hint about the barrier’s proven track record in virtually eradicating those threats. If he did, his and Ayed’s entire narrative of “failure” and the “illusion of effectiveness” would topple like the journalistic equivalent of the downing of the Berlin wall.