As Israel shut down schools yesterday to slow the spread of the coronavirus, the country’s prime minister reminded the public that the elderly are especially susceptible to the outbreak, which has killed thousands across the world.

Grandparents shouldn’t babysit the children who are home from school, Prime Minister Benjamin Netanyahu urged. Instead, “the big children will take care of the smaller children.”

In response to this straightforward guidance, the New York Times bureau chief in Jerusalem called Netanyahu a scold. “Israel closes schools and universities,” David Halbfinger, the bureau chief, wrote on Twitter. “But, like a scolding neighbor, Netanyahu warns not to ask older relatives to provide child care so parents can work.”

Israel closes schools and universities. But, like a scolding neighbor, Netanyahu warns not to ask older relatives to provide child care so parents can work: “Don’t use Grandma and Grandpa as babysitters. Big children can look after little children. ‘I am my brother’s keeper.’”

Halbfinger’s reflexively negative reaction to tells you much of what you need to know about the newspaper’s jaundiced view of Israel. For years, the Times has editorialized in news stories to disparage Jewish Israeli politicians as “shrill,” “stubborn,” “cynical,” “strident,” and “abrasive.” Halbfinger’s predecessor in Jerusalem has even insisted that Netanyahu is “best known for, and perhaps best at” speaking out in strident tones.

If that were how the paper handled politicians in general, it would be one thing. But Palestinians are nearly always spared such treatment. Even when characterizing Hamas textbooks that teach the Western Wall “belongs to the Muslims,” that the Jewish scriptures are “fabricated,” and that Zionism wants to drive Arabs out of most of the Middle East, the newspaper has used the mild descriptor “questionable.” When Palestinian president Mahmoud Abbas called a U.S. ambassador a “son of a dog,” the Times didn’t bother reporting the news at all.

Halbfinger’s lopsided coverage yesterday of Israeli political dynamics, then, was perhaps to be expected. The piece questioned whether Israeli democracy extended to the country’s Arab minority. As the headline put it, “Israel Faces a Defining Question: How Much Democracy Should Arabs Get?”

The reporter described his story similarly: “Israel’s democracy confronts a surprisingly difficult question: Are the votes of Arab citizens worth as much as those of Jews? The ugly, emotional debate that is keeping Netanyahu in power.” Israeli democracy itself is on trial in the pages of the New York Times. Does the jury of reporters and editors handle the facts without prejudice or sympathy?

Many Israelis do wrestle with the question of what self-determination for the long-persecuted Jewish people should look like. Is the security of the Jewish state, the world’s largest concentration of Jews, best assured by a government in which Jews on their own can make existential decisions? To Jews who understand the post-Holocaust sentiment “never again” as meaning they should never again have their safety hinge on the fickle goodwill of non-Jews, that is indeed “surprisingly difficult question.”

At some point on the range of answers to these weighty questions, the sentiment can tip from self-concern into racism. At another point, though, it is a straightforward political concern. If Arab lawmakers who might not be welcomed into a coalition government are on record supporting terrorism and opposing the existence of the state, as is the case in the current political conundrum, it isn’t so much a question of ethnicity, but of extremism.

In his report, Halbfinger touches on these various elements, but puts his thumb on the scale when reporting on Israeli sensitivities about the Joint List, an alliance of political parties made up mostly of Arab parliamentarians, conflating ethnic differences and political differences to play up the idea of Israeli racism. 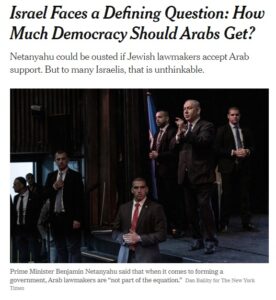 Indeed, at the very top of the online article, a caption conflates by claiming, “Netanyahu said that when it comes to forming a government, Arab lawmakers are ‘not part of the equation.'” The prime minister didn’t, however, say this about Arab lawmakers in general. (He recently appointed his Likud colleague Ayoob Kara, an Arab Druze, as Minister of Communications.) Netanyahu’s quote was explicitly about the Joint List’s politics: “The Joint List, which attacks our soldiers and opposes the State of Israel, is not part of the equation,” he said.

The body of Halbfinger’s piece likewise frames the political impasse in racial terms, stating that even some of Netanyahu’s rivals from the more centrist Blue and White political alliance “balk at teaming up with Arab politicians.” Incredibly, nowhere in the story does the reporter mention that lawmakers from both Blue and White and from Netanyahu’s Likud have very much teamed up with Arab lawmakers, whether as party colleagues or as government ministers. Why does he conceal a fact that is clearly relevant in an article that suggests an aversion to Arabs per se?

Even when Halbfinger elsewhere in the piece refers not to Arabs in general but more specifically to the Joint List or “the Arab bloc,” the reporter isn’t as forthright as he should be. In the third paragraph, he writes, “Mr. Netanyahu says the Arab bloc includes lawmakers who support terrorism and oppose Israel’s self-definition as a Jewish state.”

It isn’t until 26 paragraphs later, well past the point at which many readers will have drawn their conclusions and moved on, that Halbfinger elaborates on why “Netanyahu says” as much: A Joint List lawmaker praised a terrorist who brutally murdered a young Israeli girl. It is a fact, and not a claim, that MK Heba Yazbak referred to Samir Kuntar, one of the most notorious terrorists in Israel’s collective memory, as a “martyr.”

The admission comes in a telling pair of paragraphs:

Those who say it is legitimate to delegitimize Arab politicians often cite the more extremist backgrounds of some Joint List members, particularly from the nationalist party Balad: One lawmaker, Heba Yazbak, had praised the convicted killer of a Jewish family of four and expressed support for an Israeli accused of spying for Hezbollah.

But extremists exist on both sides: Before the election, Mr. Netanyahu wooed a right-wing lawmaker known for keeping a portrait in his home of Baruch Goldstein, who massacred 29 Palestinians while they prayed at a mosque in 1994.

Note the wording that, again, conflates racism with concern about political extremism. Does Halbfinger really believe that Israeli hesitations about working with Yazbak amounts to “say[ing] it is legitimate to delegitimize Arab politicians”?

It is also worth noting the newspaper’s inconsistency. A year ago, when Netanyahu considered a political alliance with Otzma Yehudit, the tiny, extremist Jewish party cited by Halbfinger, the reporter appropriately shined the light on the Netanyahu’s willingness to work with racists while seeking an electoral win. The newspaper’s editorial board said Netanyahu was “stooping” to “deal with the devil.” (There was no focus then on extremism “on both sides.”)

Why, then, does the same newspaper now suggest it’s racist not to team up with an extremist? Does the Times believe that Arab extremism, and support for Arab terrorism, is somehow more legitimate than Jewish extremism?

And why, when the Palestinian party that rules the West Bank had attempted to unify with Hamas, the antisemitic terrorist group in charge of the Gaza Strip, did the paper not frame the narrative as a problematic alliance with racists, but instead as a story of “hope for Palestinians and a respite for Gaza“?

And why, if Halbfinger makes a point of highlighting the “racist’ and “anti-Arab” nature of Otzma Yehudit when he reports on that party, does he shy away from noting that Hamas is certainly also “racist” and “anti-Jewish” when reporting on the Palestinian group?

It is legitimate for a newspaper to explore political challenges and racism in any particular country. But to select, omit, and frame to push readers to the conclusion that Israelis are particularly racist, while at the same time consistently downplaying or ignoring Palestinian extremism is not objective news reporting, but advocacy. When the same reporter can’t even hear the Israeli leader’s concern for seniors without casting it as a “scolding,” then the problem is all the more apparent.