CAMERA’s Israel office today prompted correction of Gideon Levy’s March 6 Haaretz article which falsely claimed that the parents of a young cancer patient from from the Gaza Strip were denied permission to travel to the West Bank hospital to be by the side of their dying daughter. 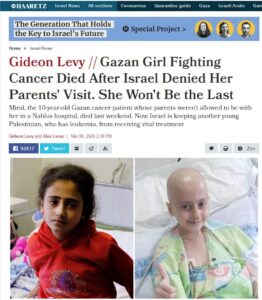 The headline in the English edition had falsely stated: “Gazan Girl Fighting Cancer Died After Israel Denied Her Parents’ Visit.” The subheadline reiterated the falsely claim that Israel denied Miral Abu Ambsha’s parents permission cross through Israel from the Gaza Strip to reach their dying daughter in a Nablus hospital: “Miral, the 10-year-old Gazan cancer patient whose parents weren’t allowed to be with her in a Nablus hospital, died last weekend. . . “

The text of the article itself buried the information that, in fact, the mother was granted permission to travel to her daughter in the Nablus hospital, and repeated the false implication that Israel rejected her husband’s application to enter:

After the [earlier Haaretz] article appeared, her mother was allowed to replace her grandmother, but Miral never saw her father again. He remained in Gaza, unable to be by his dying daughter’s side.

In a message sent to CAMERA,Israel’s Coordinator for Government Activities in the Territories (COGAT) confirmed that Miral’s mother was granted permission to travel to Miral, and also noted that, contrary to Haaretz‘s claim that the father was denied permission, as he never applied for the travel permit. COGAT wrote:

First, we must emphasize that in contrast to what the article claims, Ayman Abu Amsha, Miral’s father, did not submit any request to depart together with his daughter.

We point out that Miral’s mother did receive approval to accompany her daughter, once the erroneous items of information included in her request were corrected.

Furthermore, we will add that even before receiving the corrected request from the mother, CLA Gaza issued a permit to young Miral Abu Amshah’s grandmother for accompanying her, in order that she not depart alone for her medical treatment and that her treatment not be delayed.

Within only a few days after receiving all necessary details, CLA Gaza issued the approval for Dunia, and she departed on December 23, 2019, from Gaza to Israel in order to accompany her daughter for medical treatment. 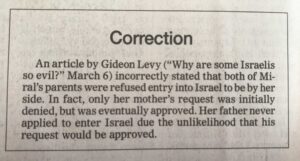 The headline in the Hebrew digital edition was marginally better than the English, as it stated: “Miral, 10, dies from cancer without her father by her side, and she will not be the last.” Similarly, the Hebrew online subheadline had stated: “Miral Abu Amshah died last week in a Nablus hospital, after she was forced to fight the serious illness along. Her father, who was left in Gaza without a permit to enter, in one of hundreds of parents of children and babies from Gaza sick with cancer, who are sent every year alone for difficult treatments.”

In response to communication from CAMERA, Haaretz commendably ran the following correction in today’s print edition:

An article by Gideon Levy (“Why are some Israelis so evil?” March 6) incorrectly stated that both of Miral’s parents were refused entry into Israel to be by her side. In fact, only her mother’s request was initially denied, but was eventually approved. Her father never applied to enter Israel due the unlikelihood that his request would be approved.

In addition, editors commendably amended the online headline to accurately state: “Gazan Girl Fighting Cancer Died Without Her Father By Her Side. . . ” Likewise, the subheadline no longer falsely claims that the parents “weren’t allowed to be with her in a Nablus headline.” The amended subheadline now states:

Miral, a 10-year-old Gazan cancer patient who had to fight bureaucracy to have her mother by her side in a Nablus hospital, died last weekend without seeing her father since December. …

Moreover, editors also appended a correction to the bottom of the digital article clarifying that Miral’s father never applied for a permit to visit her, and that her mother was indeed granted access to be with her.

Miral Abu Amsha’s mother was present by her daughter’s side for most of the period of her hospitalization in the Al-Najah Hospital in Nablus, and not as reported in the article (“A 10-year-old girl dies alone from cancer, and she will not be the last” (Haaretz, March 6). Her father did not request a permit to accompany her from Gaza to Nablus because of the low chance that his request would be approved.