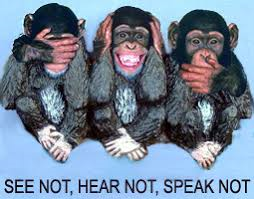 The American media were typically oblivious to a recent diatribe by a high ranking Palestinian Authority official condemning the Jewish people and Israel.  The message is consistent with the PA’s position (more below).

Palestinian Media Watch (PMW), a non-profit organization that monitors Arab media in the West Bank, eastern Jerusalem and the Gaza Strip, detailed a recent teaching by the PA’s Supreme Shari’a Judge Mahmoud Al-Habbash, PA Chairman Abbas’ personal advisor on Islam. Al-Habbash stated that Israelis/Jews are the “enemies of Islam,” have a “culture of Satan,” and represent “evil.” 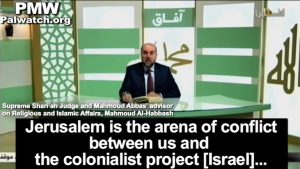 The most important religious figure in the Palestinian Authority and the closest to PA Chairman Mahmoud Abbas, continues to tell Palestinians that the conflict with Israel is an uncompromising religious war for Islam against Israel and Jews. Mahmoud Al-Habbash, who was appointed by Abbas as his personal advisor on Islam and the PA’s Supreme Shari’ah Judge, recently stated that conflict today with Israel is “The Battle of History between Islam and the enemies of Islam.” Israelis/Jews are the “enemies of Islam,” “enemies of Muslims,” have a “culture of Satan,” and represent “evil.” Worse yet, Al-Habbash explained that the current battle is not just another battle on behalf of Islam. It is the ultimate battle described in the Quran as the “final promise,” leading to great destruction for the “Children of Israel.” It should be noted that Al-Habbash teaches this message of epic religious war to a very religious Palestinian Muslim population. Polls consistently find that 95% of Palestinians saying that religion is “important” for them.

The message is consistent with the PA position

Mr. Abbas, the Palestinian Authority president, said the following on Palestinian television on Sept. 16: “We welcome every drop of blood spilled in Jerusalem. This is pure blood, clean blood, blood on its way to Allah. With the help of Allah, every martyr [murderer of Jews] will be in heaven, and every wounded will get his reward.”

This declaration was apparently triggered by a false rumor that Israeli officials planned to enter the Al-Aqsa Mosque located on Israel’s Temple Mount.

A basis for such teachings?

Al-Habbash’s message is consistent with various passages in Islam’s bible, the Quran (Koran), including:

Quran [5.3]: The punishment of those [Jews and Christians] who wage war against Allah and His apostle [The Prophet Muhammad, founder of Islam] and strive to make mischief in the land is only this, that they should be murdered or crucified or their hands and their feet should be cut off on opposite sides or they should be imprisoned; this shall be as a disgrace for them in this world, and in the hereafter they shall have a grievous chastisement.

[5.51]: O you who believe! do not take the Jews and the Christians for friends; they are friends of each other; and whoever amongst you takes them for a friend, then surely he is one of them; surely Allah does not guide the unjust people.

[5.64] And the Jews say: “The hand of Allah is tied up!” Their hands shall be shackled and they shall be cursed for what they say … and they strive to make mischief in the land; and Allah does not love the mischief-makers.

[17.4]: And We had made known to the children of Israel in the Book: Most certainly you will make mischief in the land twice …

[111.117-120]: They [the Jews] are the heirs of Hell…. They will spare no pains to corrupt you. They desire nothing but your ruin. Their hatred is clear from what they say … When evil befalls you they rejoice.

Rarely does the American media report on such incendiary speeches by Palestinian officials (The Wall Street Journal report above is an exception). Is it because it’s not considered newsworthy? This is unlikely since the media pays disproportionate attention to the Israeli-Palestinian conflict. What’s likely is that it’s due to being influenced by the false Palestinian victimization narrative.