Following the massacre in Pittsburgh’s Tree of Life synagogue, the Washington Post‘s “Morning Mix” posted a misleading headline suggesting that Pittsburgh’s Jewish leaders were averse to a condolence visit by the U.S. President.  The headline declared: “‘He is not welcome here’: Thousands support Pittsburgh Jewish leaders calling on Trump to ‘denounce white nationalism.’” (Emphasis added.)

The headline falsely implies that the leaders of Pittsburgh’s Jewish community, or the mainstream leaders, or the majority of Jewish leaders in Pittsburgh expressed inhospitable sentiments toward President Trump. As the article itself made clear, those opposed to his visit were a small group of  anti-Trump activists, an affiliate of the group “Bend the Arc,” rather than Pittsburgh’s mainstream community  leaders. Indeed,  the targeted synagogue’s rabbi, Jeffrey Myers, expressed quite the opposite sentiment, saying that “The community would welcome [President Trump’s] presence here, because he is our president… [The anti-Semitic rampage]  has nothing to do with politics in America. This is hate.”

After CAMERA contacted the Washington Post about the erroneous headline, it was changed to: “‘He is not welcome here’: Leaders of Pittsburgh-based Jewish group want Trump to denounce white nationalism.” (Emphasis added)

The Washington Post again amended the headline, this time removing any reference to Jewish leaders. As of this writing, the headline states: “Thousands signed a letter saying Trump was not welcome in Pittsburgh. He plans to visit anyway.“ 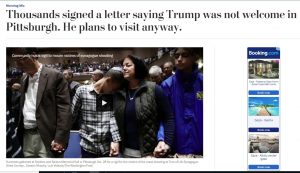