It was only a matter of time for partisan journalists to exploit the tragic massacre of Jewish worshippers at Tree of Life, a Pittsburgh synagogue, to promote their own biases. Within no time, charges of anti-Semitism were wielded as a weapon with which to attack those of different political persuasions and those who support Israel.

In fact, the perpetrator was a typical, run-of-the-mill anti-Semite, the likes of which Jews have unfortunately been acquainted with for centuries. And despite the mass murderer’s declared hostility toward the U.S. President whom he accused of philo-Semitism, Atlantic columnist Franklin Foer placed the blame for the massacre on Jews themselves – specifically, the President’s Jewish supporters. He called for them to be shunned by others in the Jewish community:

“Any strategy for enhancing the security of American Jewry should involve shunning Trump’s Jewish enablers. Their money should be refused, their presence in synagogues not welcome. They have placed their community in danger.”

Worse yet was the journalist who sought to blame Jewish support of Israel for rising anti-Semitism. GQ reporter Julia Ioffe took aim at Jews who supported the U.S. embassy move to Jerusalem,  suggesting that  support for pro-Israel positions is to blame for murderous anti-Semitism: 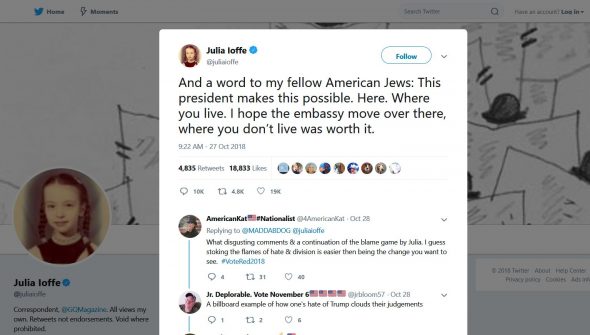 And Haaretz columnist Chemi Shalev  exploited the massacre not only to attack the American president, claiming he was “blaming the Jewish victims for their deaths” by suggesting that an armed guard at the synagogue might have mitigated the extent of the brutal attack, but to attack the Israeli prime minister’s expressed sympathy and solidarity with the Jewish victims:

“…if the support of their own foul-mouthed, race-baiting president wasn’t enough of a burden, the hypocritical expressions of support emanating from Jerusalem – welcome as they may be – add insult to the American-Jewish injury…So, in their time of need and despair, American Jews in general, and Pittsburgh’s in particular, are condemned to being comforted by a president whose rhetoric and conduct appalls them and consoled by an Israeli government that rejects them and their values. In their eyes, and in the eyes of the world, the worldviews of both are closer to those of their Nazi assailant than to the values of the Jews who were murdered in cold blood in their sacred house of prayer.”

Such hate rhetoric directed at American and Israeli leaders or at support for Israel does not reflect mainstream American Jewish views, as the journalists suggest, but only their own.  Is it any wonder why trust in the media continues to decline?